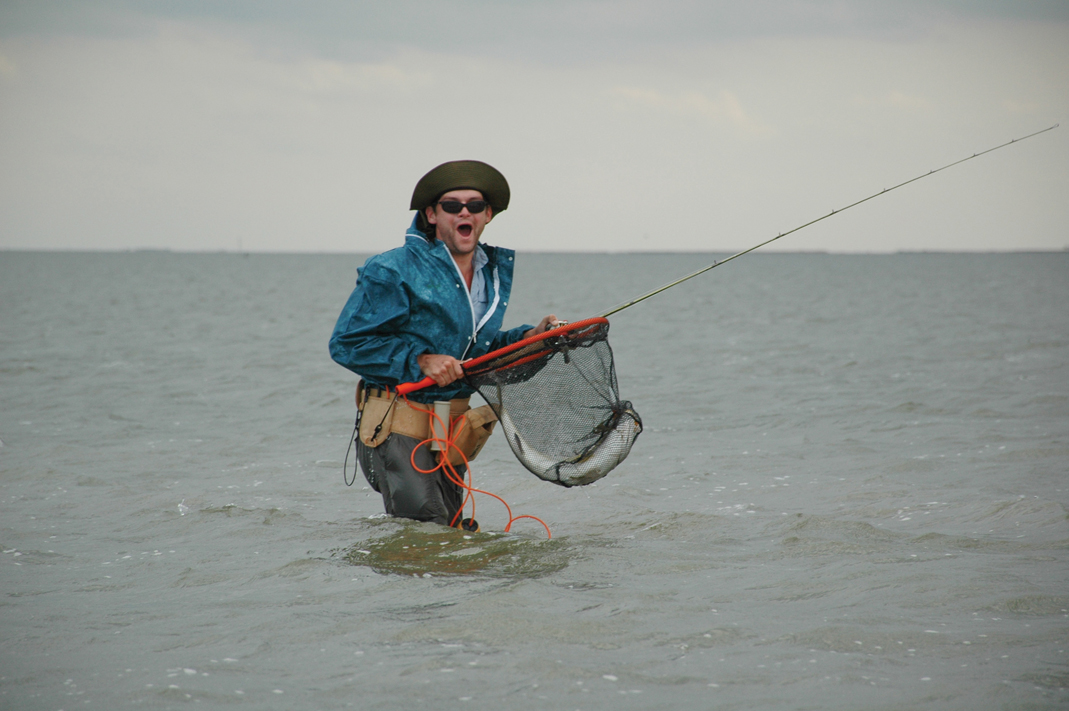 Port Mansfield has always held a special place in my heart. Everett and I spent our honeymoon in Port Mansfield and it is also where I have landed several of the largest trout of my fishing career. So, what better place to take my son for his thirtieth birthday? We packed up and headed south on a Thursday afternoon.

We spent Thursday night preparing all the right baits–so we thought–until the famous Mike McBride showed up on our front porch with a HUGE bag of "secret stuff" from soft plastic to topwater. Mike said, "I heard y'all were coming and I put something together that works down here." He went on to explain how each one worked, when to use it and why it was going to work.

I had booked Capt. Tricia for two days in search of a trophy trout for Jason's birthday. The moon was right but the weather was iffy. We had a front that was going to move in on us on day two. I was hoping we could get the job done on day one and avoid the approaching front. No such luck!

The boat was loaded and off we went, Jason and his buddy, Bryan Lawrence, aka Llama. Tricia and I shared bucket seats at the helm, the boys perched on a cooler seat in front of the console behind a mountain of wading gear and ice chests filled with food and drinks; after all, it was to be a birthday party. Everything pointed toward a great day of fishing.

We waded a few places with only bites of small trout and an occasional red that we were all sure was "the big one." We fished hard all day. My thoughts were that the big ones would feed before the front arrived the next afternoon.

The guys decided they would hang out that evening with Mike and have a little jam session, Port Mansfield style, on the front porch. Jason on the guitar, Mike on the harmonica and Patrick and Llama doing backup. This went on until about midnight. I finally told the guys we came here to fish and it's time to go to bed. Mike said something about me being "Broomhilda" but then agreed it was time to call it a night.

As the sunrise appeared and we headed into it, it was quite different than the day before. I felt a sense of caution and uncertainty, knowing we had a front approaching. We decided to fish closer to the harbor and not venture as far as we had the day before. The fish acted about the same as the day before, tons of bites, some nice fish but, all small.

I could see the front approaching in the distance but we continued to fish. Just one more cast–gotta be a big one mixed in here somewhere.

It was around ten o'clock as we headed to another spot, the phone rang and it was Mike. "Y'all need to get back to the dock now! The front is in Raymondville and has gusts of 30 to 40." We headed in and made it to the dock just as the winds hit and the rain began to pour.

The front moved though as fast as it arrived dropping temperatures and some lingering rain. Tricia asked, "Do you want to go back out?"

Before they could get another word out, I said, "We came here to fish; Let's go!" And off we went again.

There was a definite change in the bite, fewer and farther between. We moved a couple of times and the result was the same. At the next stop Tricia decided to put a topwater bait on and BAM she was on a 29-incher!

The guys quickly changed to topwaters. I told Tricia I would go back to the boat and get the camera so we could make photos of her fish. I was on the boat getting the camera when Jason had a huge blowup.

Worried that he might not land it, I yelled, "She's green, Jason, don't horse her. Be careful or you'll lose her!"

I was able to zoom in with my camera and get some really cool action shots of him landing his lifetime dream speckled trout. A thirty-incher no less, and on his thirtieth birthday fishing trip. We shot photos as quickly as possible, got her revived, and set her free to fight again.

Later, reminiscing over his catch, Jason said, "When I saw Tricia change baits I knew that's what I needed to do and all I can remember is hearing Mike the night before saying, 'Now you got to let that bait roll over the waves naturally and work it slow.'"

"Best birthday ever! Thanks Mom!"