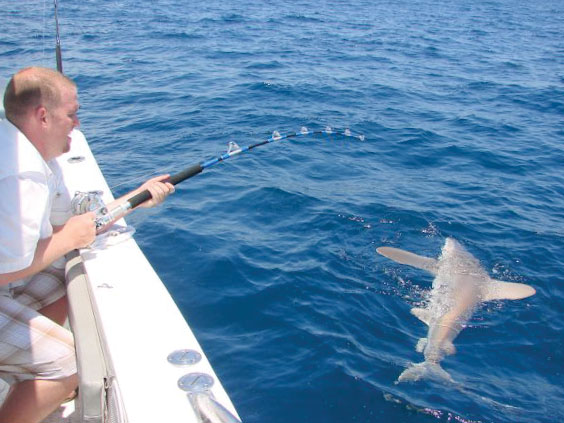 As we enter a new year and look forward to warmer days on the water I find myself with lots of time to think of the upcoming fishing season. We have all heard of recent regulatory changes that reduce our fishing opportunity but Im here to tell you there are many worthy game fish in the Gulf of Mexico that are commonly overlooked. One such family of challenging fish would be the sharks, and for the way I fish most of the time, were talking mainly blacktip and Atlantic sharpnose. Anglers seem to have somewhat of a love-hate relationship with sharks, with some thinking of them as a complete nuisance.

I personally love the aggressive nature and strong fighting characteristics of sharks and enjoy watching a big blacktip go berserk and get airborne with jumps that rival even the liveliest tarpon.

It would probably surprise many seasoned coastal fisherman to learn how many of my clients ask about their chances of catching a shark. Many want to actively target them, especially the youngsters onboard. To them it really doesnt matter how big it is, they just simply want to catch one. Being the apex predator of the worlds oceans and having been sensationalized in movies, TV documentaries, and Discovery Channels famed Shark Week; the fascination with sharks among youngsters is easy to understand.

I would venture to say the blacktip is the most sought-after species when people are looking to catch a shark in the Gulf. The blacktip is found along the coast of the United States from New England to Mexico but are most prevalent between North Carolina and Texas. The blacktip is a relatively fast-growing shark reaching maturity at about 4-5 years of age and commonly living longer than 10 years. They also have a relatively large litter of pups, about 6 per litter. Blacktips can reach a maximum size of about 6 feet in length. Two other popular sharks found in deeper water off our shores would be the mako and hammerhead, though both are thought to be currently overfished, due perhaps more to their slow rate of growth than anything else.

While the two most common sharks along the Texas coast (blacktip and Atlantic sharpnose) are currently in good numbers and not subject currently to overfishing, in many parts of the world sharks in general have definitely been overfished, some to the brink of destruction. Shark finning the wasteful practice of removing sharks fins and discarding the fish overboard to die in support of the popularity and demand for Shark Fin Soup in some cultures has taken a massive toll. Finning, though illegal in US waters, is unfortunately lucrative and widely practiced in some foreign commercial fisheries.

Various well-meaning measures have been implemented to protect declining shark populations around the world. Even our own congress has passed legislation specific to these species. Some have proved beneficial while others have fallen on corrupt foreign governments that turn a blind eye to illegal landings.

Some local measures have had limited success due to the misconception that all sharks are endangered. One such effort in Florida is called The Shark-Free Marina Initiative. This initiative has a singular purpose, to reduce shark mortality worldwide; encouraging shark conservation at sport fishing and resort marinas through prohibiting the landing of ANY shark at the participating marina. This group encouraged a blanket no-take approach rather than managing each species depending on its needs. As responsible fishermen and consumptive users of the resource, we usually have a hard time wrapping our arms around this style of management.

Taking a short look at the vulnerability and plight of certain shark species, NOAA has recently proposed a rule change increasing the minimum size for the taking Atlantic and Gulf sharks. NOAA has outlined several alternatives and wants to increase the minimum fork length from 54 to 96 inches. Wow thats a whopping 8 feet including sharks that never grow to that lengthand the final outcome will depend upon how the final ruling is written. The final ruling could also bring about other requirements for recreational fisherman catching sharks.

Now here is the kicker and let this one sink in all recreational fisherman who want to take and retain any Highly Migratory Species; i.e. yellowfin tuna, are required to purchase annually, an HMS or Highly Migratory Species permit. This permit not only allows them to retain certain fish, it may also require those same anglers to follow federal guidelines regardless of where they are fishing, thus making the taking of sharks under 96 inches illegal even in state waters open to such fishing. This very rule was used against the federally-permitted charter boats preventing them from taking part in the Texas state water year-round-open red snapper fishery. Essentially if you have the permits on the boat; you will be required to adhere to the more restrictive federal guidelines. I fear many will fall victim to this one important detail, making it unlawful for fishermen to take sharks that are legal in Texas state waters.

Much is still up in the air depending the final rulings; I also know that I am talking sharks here, and many will make comments about not wanting to catch them anyway and snobbishly wondering why anyone would care if they were just completely off-limits. Personally, I have seen the numbers of people who really enjoy the pursuit of our oceans apex predators and would like to see that option of retaining one for the table left up to that individualif from a sustainability angle the resource can allow it.

It seems that many of my writings and much of the daily dock talk is becoming less about fishing and more about the federal management of our fisheries. To me its become a full time job just keeping up with the changes and trying to understand how we can balance the enjoyment of offshore fishing while following the rules and keeping my nose clean, so to speak. But one has to wonder if a fishery is not undergoing overfishing and is sustainable at the current rate of harvest then why are federal fisheries managers considering rule changes that would make these smaller species of sharks off-limits by default?