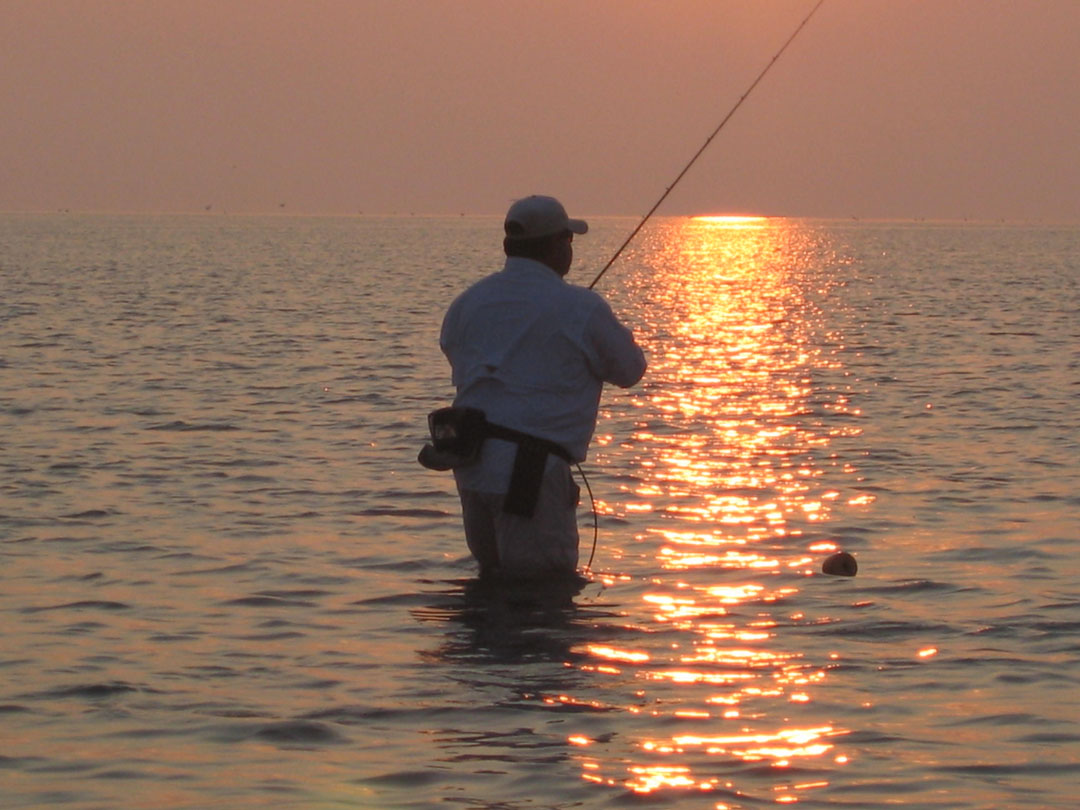 An early morning start near the Arroyo Colorado.
The origin of this story goes back to August 2007 when we were on our way to fish Mexico's Lake Guerrero. At that time I had never fished in freshwater so I was excited to give it my best try. As we got closer to the lake I started the trash talking and ended up challenging my dad to see who could catch the most bass that day. Needless to say, he put it on me really good and was not shy about announcing it to me on the way back to the lodge. I also think that's how the phrase "Who's your daddy" became common usage between us. My only comeback was to challenge my dad to a saltwater fish-off when we got home where I felt very comfortable in the elements. The challenge was quickly accepted.

Due to various reasons we were never able to pick a date for the fish-off but the challenge was certainly not forgotten. The time finally came and we both agreed that Labor Day 2008 would be a good day to have it. We set the rules and anxiously waited for the day to come. Oh, how the trash talking had once again begun from both sides. I think you could've filled a hundred grain silos from all the words that were said.

The day before the fish-off I got my boat ready and filled it with ice, oil and gas. I started the engine and made sure everything was in good working order. I got my fishing equipment organized and ready. Just when I thought everything was done the hardest part had just begun. I found out that the mental plan was actually harder than the physical plan. All night, as I tried to sleep, scenarios kept going through my head. I thought to myself, "Hey, this is supposed to be friendly and fun." Then again this was a challenge I had started.

Remembering some of my return trips from fishing with my dad and reminding him who caught the most fish on that day kept reeling through my mind. This day was going to be different. I was driving my own boat, and I could fish anywhere and come up with my own game plan. Everything I had taken for granted was now on my shoulders. I was accustomed all these years to my dad taking care of the physical and mental part; all I did was jump on the boat and fish. This time I was on my own.

My dad and I would not be alone. Since we were taking off in different directions we needed assistance with photography and an unbiased measurement of the fish. Joining me would be my uncle Louis and my cousin, Louis III. My dad was accompanied by our friend Adrian and his son, Nick. The catch would consist of two reds, two trout, and two flounder. We also added that if either of us caught a trout over twenty three inches, we would weigh it, photograph it and release it. We had to be back at the dock by 1:00 p.m. Most important of all, we could not include our passenger's fish.

The morning finally came and my dad was courteous enough to wake me up. I knew he meant business when he did not wait for me. Being that he got an earlier start, I later passed him up as he was on his first wade. I could see that our game plans were going to be different from the start because of where he was fishing. I was going for my flounder early, redfish next, and then my trout. My first spot that had been yielding lots of flounders produced one keeper trout. I felt a little pressure as I raced to the next spot all the time thinking where is my dad fishing and what has he caught.

My next spot produced some explosive blow-ups on my topwater and I even managed to hook a good fish only to lose him after a short fight. My uncle didn't help the cause. They drifted a few hundred yards away, yelling that Louis III was hooked up. After an hour of nothing but blow-ups I called for them to pick me up. My uncle hyped the competition by saying he had just gotten off the phone with my dad and mentioned that he had some big reds. I didn't know whether to believe him because my uncle has been known to fib a bit, especially when it comes to fishing.

All this was playing in my mind and the pressure was building. The next stops before heading in produced the same results. Today was not going to be my day and I could hear it already, the phrase I so vividly remember when we were in Mexico, "Who's your daddy."

When we got back to the dock there was joking going around before we opened the ice chests. I knew I had no chance but was eager to see what my dad had caught. My dad and his crew played it like they had caught nothing and we played it like we had really busted them up. When it came time to weigh the catch I saw just how badly I'd been beaten. To add insult and injury to my pride, my dad weighed, photographed, and released a six pound trout. His total weight in two reds and two trout was twenty two and a quarter pounds. My total weight was an embarrassing two and a quarter pounds in the two trout I caught. You guessed it; I was getting hammered by trash talking from every direction. There was nowhere to hide from, "Who's your daddy."

We cleaned the fish and headed to my grandparent's house for a family fish fry. The jesting continued at the picnic table and all I could do was take it. I realized I had just been schooled by my dad but the most valuable of the lesson was that I gained much experience on what it takes to mentally and physically prepare for a trip. In the end, we all shared the laughter. I got to spend time doing something I love to do and, most important, I spent time with my dad. I wouldn't trade it for the world.