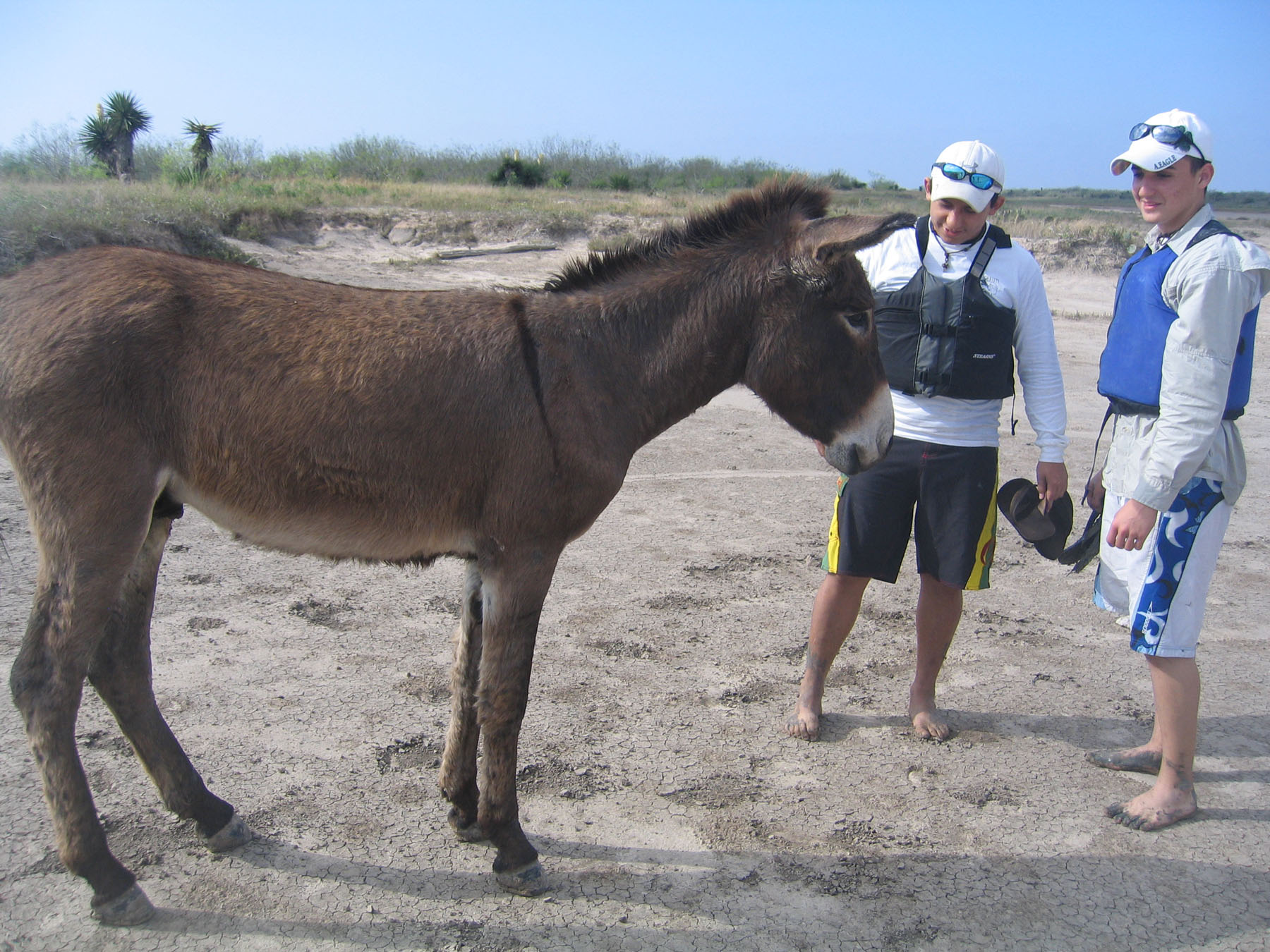 Even a real donkey showed up for the party — I guess he wanted to play Pin-the-Donkey.
Not too long ago I celebrated my sixteenth birthday on the water. In the past I have celebrated my birthday with a special lunch or dinner with my family. This year I wanted something different so I asked my parents if I could spend my birthday fishing with some of my closest friends. Both of my parents agreed, and the excitement began to build. I would be spending the entire weekend with three of my friends. We got the opportunity to stay in a home right on the Arroyo Colorado. The house had a pier that was equipped with fishing lights and all the necessities to make it a comfortable stay.

The weekend actually started with a trip to the grocery store to get all the supplies for four hungry teenagers. My friends all met at my home on Friday evening and we gathered all the equipment needed: sleeping bags, kayaks, fishing rods and reels, lures, and other equipment.

On our way to Arroyo City I could tell it was going to be a fun weekend because everyone was having a great time laughing as we shared fishing stories from the past. Arriving at the home for the weekend we unloaded all the food, and gear. I knew that my friends would be impressed with all the exotic game mounted on the walls. I was right; they stood in awe staring at the animals they were familiar with and some they had never seen before. After settling in we gathered our fishing rods and headed to the pier for some night fishing. We ended with zero bites, but still it was fun especially teaching some of my friends how to cast.

The next morning we got up bright and early excited about our kayak journey down the Old Arroyo. Before we paddled off, I took the time to teach my friends how to maneuver a kayak and give them other basic instructions. We all made sure we wore a life jacket before we launched. By seven-thirty we were well on our way on a kayak trip that brought us more laughter than we ever could imagine.

My three friends Luis, Sharam, and Shane had little or no fishing experience. Entering the Old Arroyo we split into two groups covering both shorelines. Each of my friends was rigged with popping corks and dead shrimp; I decided to throw a topwater. The first of many laughing moments occurred when my friend Shane, the most inexperienced fishermen of the bunch, caught a catfish. He didn't know what it was until we told him. We also told him not to handle it because it could poke him and inflict pain. His naive but funny remark was, "What do they poke you with, their whiskers?" We all burst out in laughter and paddled next to him to help remove the fish from the hook. After poking fun at him for being so green about fish and fishing, he probably would have been better off getting poked by the catfish rather than us poking fun at him. On we went further into the old river, the paddle was easy and it seemed my three friends were enjoying themselves and so was I.

The next incident again involved my friend Shane. He had to go to the restroom so we dug our paddles into the mud and waited on him as he climbed off the kayak and into the bushes. Seconds later here comes Shane running out of the bushes with his pants halfway down and a look of fear in his face. We all looked at each other wondering what frightened him. Right behind him was a wild pig that didn't like anyone near his territory. Shane yelling for fear of his life jumped on the kayak and wanted no part of a fight or being bitten by a wild pig. All this time we are dying with laughter to the point of tipping over our kayaks. It took some time for our stomachs to settle from all the laughter at Shane's expense.

Another funny occurrence involved my friend Sharam and me. We were in really shallow water when I spotted a big redfish tailing. I threw my topwater near its path and gave it a few twitches; the redfish went after it but missed. I guess it felt our presence and took off like a speeding bullet into deeper water. As the redfish sped across the mud flat, my friend Sharam was not expecting what was about to occur. The big redfish hit the side of his kayak and startled him to the point where he almost flipped over. Again, we all started laughing at the incident. By now I'm thinking what's next.

We continued our trek further into the old river and came across what looked like an old deer camp. By this time we were tired so we all agreed to take a break before heading back. As we sat on the bank, I saw a pair of pointed ears coming at us. At first I thought it was a coyote. I pointed this out to the guys, and they thought it was a horse. We walked towards as it continued to approach us. When we got closer, we realized that it was a donkey. How appropriate! I guess he knew it was my birthday, and he wanted to play pin the tail on the donkey. Little did he know that we were all too old for that? We did pet him and sent him on his way.

Boarding our kayaks and realizing we had a long paddle back against the wind was not something we wanted to think about. Traveling about halfway back, two of my friends got really tired so we had to stop and take a break. Being that our arms were worn out, we decided to walk the kayaks back along the bank. Big mistake! We sank in mud to our knees. We were better off paddling back even though our arms were tired. At one point I had to tie my friend Shane's kayak to mine and tow him in. As I struggled while paddling and tugging my friend in his kayak, it struck me that this fishing trip had really nothing to do with fishing. It was about sharing, experiencing, and bonding with my best friends.

When we came within sight of the house, we all gave a sigh of relief. Tired, hungry, and thirsty we still had one last burst of energy. We sang out loud as we paddled endlessly. If the donkey could hear us sing, he probably would have covered his big ears. Arriving at the dock we tied up and layed on the dock completely exhausted, not caring if we'd caught anything or not. It was now twelve-thirty in the afternoon. Our paddling adventure lasted five hours, but it didn't seem that long because of how much fun we had.

We all slept through most of the day and in the evening a big barbeque was prepared for us. As the night grew old, the thought of my sixteenth birthday celebration coming to an end was soon arriving. We didn't even get to fish under the lights on our last night because we were so tired. We woke up early the next morning and began to load all of the stuff into the utility trailer and headed back home.

Reflecting back to this weekend I can honestly say it was one of the most memorable birthdays I have ever had. Spending time and teaching my friends how to kayak and fish is something I will remember for a very long time. Even though we didn't catch anything worthwhile, we really did! We spent time together and built a stronger friendship. Isn't that what fishing is all about?