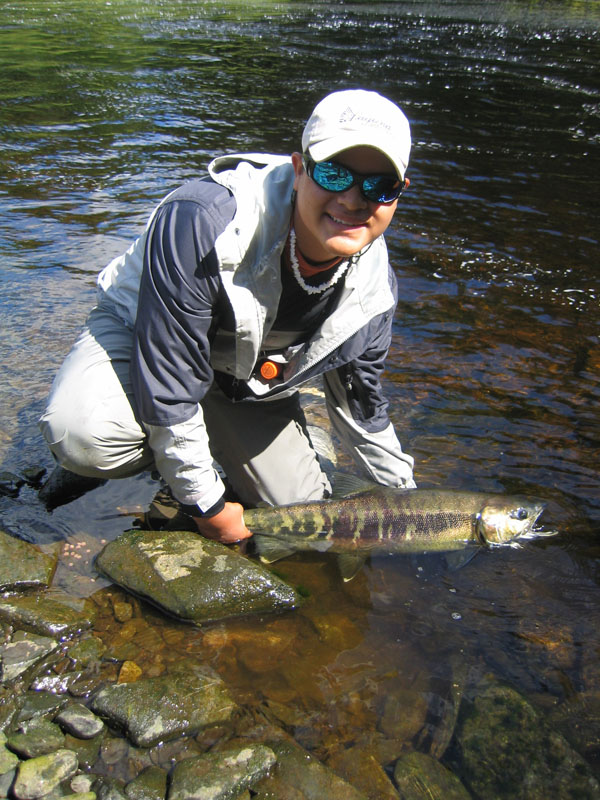 My recent summer vacation was the most memorable trip I have ever been a part of. My family and I went on a seven-day cruise to Alaska. On the trip, my dad and I learned many interesting facts about salmon. We realized that salmon are born in freshwater, yet they go out to sea only to return in two to three years back to the place where they were born. They return to their place of origin by smelling the composition of the water. Here they lay their eggs and die. I thought that was especially interesting.

We took advantage of a chance to visit a salmon hatchery and they are doing a great job in making sure the species continues to thrive. When the salmon come back up the river from the ocean to spawn, they stop eating and begin to lose their flesh. Given that they have stopped eating, if they hit your fly, it is only out of aggression not out of hunger.

On our trip, it was a must that my dad and I go fishing. We hired a guide out of Ketchikan, Alaska. His name was Capt. Dan Hubble. He was kind enough to show me how to work a fly rod. We were off through the beautiful Alaskan mountain scenery for an adventure that will last a lifetime. We drove about twenty-five minutes into the mountains to the most beautiful river I have ever seen. When we arrived, we had to walk about forty yards down a mountainside, and as we neared the river, I could already catch a glimpse of the salmon jumping in the pool of water.

We took out the fly rods, tied on a fly and began casting up the river. Capt. Dan gave me instructions on how to make an easy cast towards where the fish were holding. On my fifth cast, I managed to catch a fourteen-pound pink salmon that got my adrenaline racing. It fought like an oversized redfish, but I wrestled it and finally landed it. Capt. Dan assisted me, and I was able catch my first pink salmon.

What a fight they put on! My dad was able to catch one also, and his fought just as good. Two of his salmon jumped and ran just like a big snook. Later in the day, we moved down the river to an area where you could tell the tide was low. My dad asked Capt. Dan how high a normal tide is, and the captain explained it would rise about twenty feet. Getting back to fishing, my dad was able to land another Salmon. He took several photos of it before releasing it.

The fishing was awesome, but the scenery was breathtaking. There were mountains surrounding us and a crystal clear river running through the wilderness. What a sight! To top it all off there was an eagle soaring through the sky looking for a fresh salmon to satisfy his appetite. Later in the day and with only half an hour to fish, I set the hook on what would be the biggest catch of the day. It was a struggle with this one, but the guide coached me to move back in order to land it. After nearly twenty-five minutes of fight, the big fish was done. My guide mentioned that the fish most likely weighed in around twenty pounds. We took some nice photos and released it back into the river to finish its course of life.

I thanked Capt. Dan for giving us a wonderful experience. This is a fishing trip that I will never forget. I encourage all to visit the beautiful State of Alaska and experience everything it has to offer. And if you are ever in the Ketchikan area I highly recommend Capt. Dan Hubble who guides out of a fly shop called "The Hook Up" in Ketchikan, Alaska. Their web site is www.hookupflyshop.com.