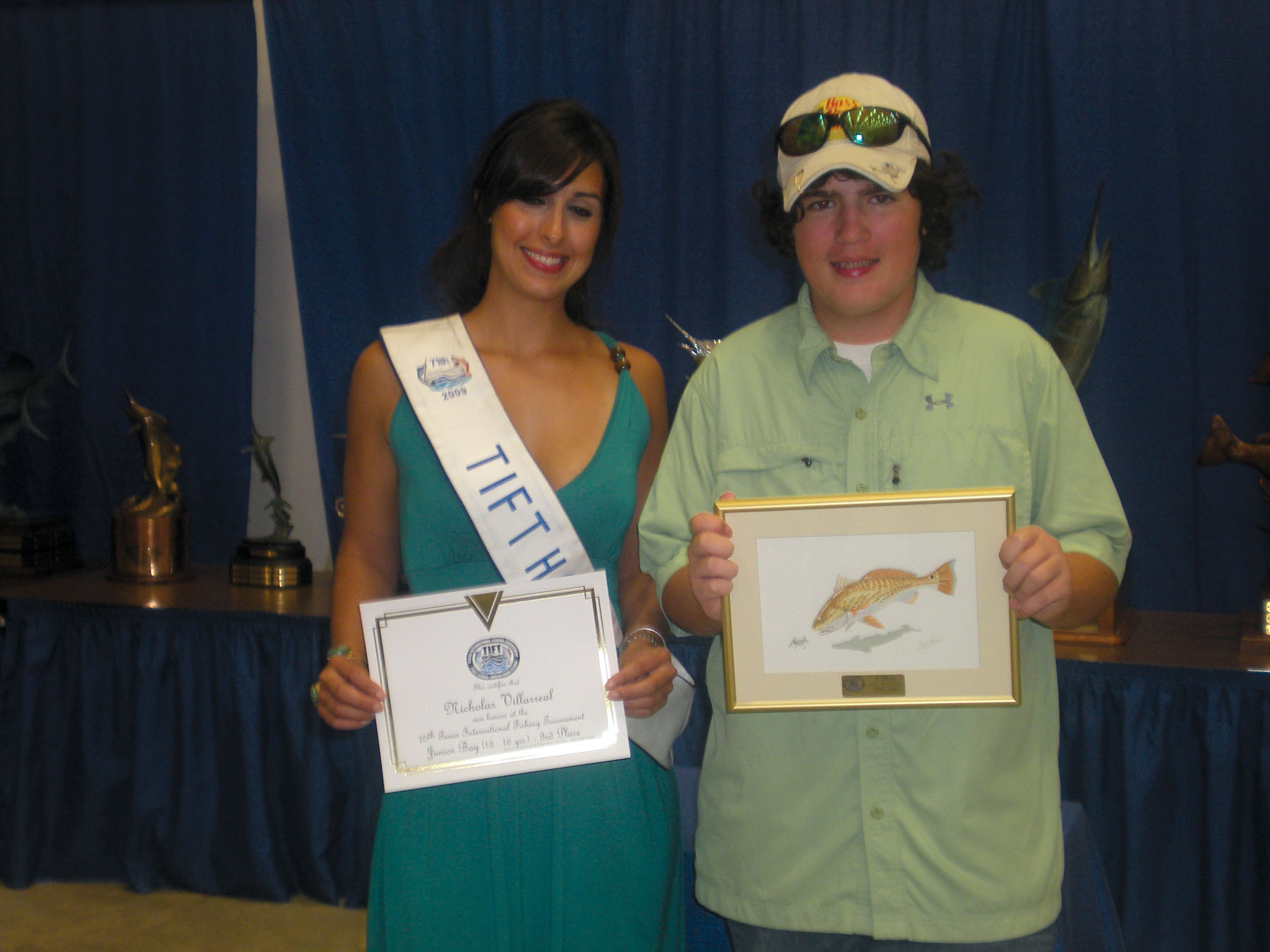 Nick placed third in his age category.
August brought the 70th anniversary of the TIFT Fishing Tournament. TIFT is a family event and anglers of all ages from all over the country look forward to participating in both offshore and bay divisions. Last year Hurricane Dolly brought the tournament's only cancellation in its history, so this year's crowd was full of anticipation and ready to set the hook on anything that would bite.

I had the opportunity to fish the bay division with the same group as in the past four years, including a new addition to the team, thirteen year old Nick Villarreal. Nick has a great passion for fishing; he reminds me of myself when I was that age.

Leaving the dock before daylight made it even more exciting, and being that it was Nick's first TIFT Tournament I knew exactly how he felt. As for me; my adrenaline was pumping. The thought of making the right cast at the right time went through my mind; questions without answers kept ringing in my ears. "Would I walk in the right direction? Could I set the hook at the right time? Should I use a topwater or a plastic worm?" All of these thoughts added to the knot I had in my stomach. No longer was I competing in the junior bay division. This was my first year to compete with the adults, and I did not know what to expect. I did make it a point though to remind myself that no matter what the outcome would be I would enjoy myself till the end.

We bailed out at our first spot. Nick and my dad worked the edge of a spoil bank hoping for a big trout bite; I decided to wade a flat about 100 yards to their right. Walking through grassy knee deep water I spotted a seagull flying low; and right below the bird was a pod of tailing redfish. I quickly picked the one to throw at hoping that it would be the biggest in the group because of its rather large tail sticking out of the water. Made a perfect cast and bam I set the hook on a solid red. The big redfish stripped about ten yards of line, and then the unthinkable occurred. My line busted. I tied on as fast as I could, but by then I lost sight of the redfish. As I stood quietly scanning the water I could hear Nick and my dad laughing with excitement. I could hear my dad congratulating Nick on his big trout. Two of the guys in our group were on a big school of redfish, so we opted to join them. The school had about hundred to one hundred and fifty fish in it, and the cool thing about it they were in twelve inches of water. You could see the water turn a bronze color as they cruised in front of us. They were very difficult to catch, but Nick managed to land the one he was looking for. As Nick and I waded side by side, it brought back past TIFT moments. I was happy to see him do well. It was barely eight-thirty in the morning and all he needed was a flounder to complete his stringer.

It was at the next stop that I realized it was not going to be my day. I hooked and fought a big trout that stripped line like a redfish. As I got her closer, she shook her head and slipped into the water. My heart sank with that lost fish, but I continued plugging away. At the next stop something unusual occurred. I was catching lots of small trout when all of a sudden I got a hard thump; I set the hook and could tell it was a decent trout. The trout headed for the shallow, thick grass, and again the unthinkable occurred. The hook came out. I was in shock and more so was the trout as it laid in the thick grass bed. I could still see it. I ran up to it and scooped it up with my net. I stood there laughing to myself while the people in the boat close by watched in disbelief. I spent the rest of the day looking for an upper slot redfish, but all I could manage was a five pounder.

The end of the first day came quickly as we stood at the weigh-in. Nick was feeling nervous, but I knew he was in good shape. Bright and early the next day we headed to the area where we found the big school of reds. Again they were hard to catch, but not for Nick. He was able to land what he needed. Since nobody on our team other than Nick had a chance to place after the first day, we made the decision to leave the reds and help locate a big trout for him. Nick and I waded side by side and twice I landed the trout he was looking for. I could see and sense his frustration and knew what was going through his mind. I encouraged him to keep casting. By the end of the second day Nick did not land the trout he was hoping for, but he did have a good first day and still had an outside chance to place.

On the third day the awards were held at the SPI Convention Center, and even though I did not go, I knew exactly what Nick was going through with sweaty palms, knot in his stomach, and "what if" thoughts. As they announced the winners, Nick's name was called out for third place in the junior bay division. When we got a phone call letting us know he had won third place, we were so happy for him. I knew how proud he must have felt.

Even though I didn't fair well in the tournament it was fun watching a younger person earn his placing. His first TIFT experience renewed a lot of fond memories. I don't fish many tournaments but TIFT is one I always enjoy. If you have never been a part of TIFT, I highly suggest that you join in on the fun and excitement. With well over fifteen hundred anglers combined in the offshore and bay divisions the excitement can well up, and I know for sure of one angler that is already eagerly awaiting next year's tournament. Congratulations Nick on a job well done.