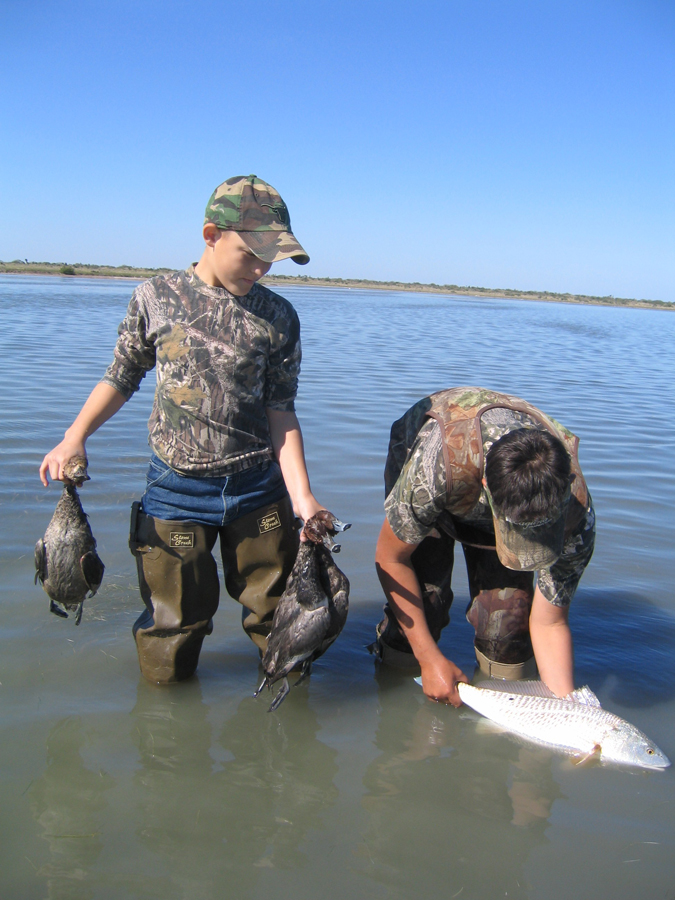 Just before the first half of duck season ended, we were able to put in a duck hunt and fishing trip all in one day. I really didn't look forward to waking up at 4:30 a.m., but the thought of ducks flying overhead and being decoyed into our spread combined with a little sight casting to shallow water reds caused a burst of energy in me to get up so early in the morning. Being that it was the last week of duck hunting before its closure for a couple of weeks, we had no chance to pick a cold and cloudy day which is always ideal for duck hunting. Instead, we took what nature gave us and tried to make the best of it.

We loaded up the guns and all the essential gear, including the decoys, making sure not to forget the fishing equipment. My uncle Louis Ara and his son Louis would be joining us on the trip. The weather called for little wind and clear skies which would make it tough for a duck hunt outing, but perfect for some shallow water wading.

Running a little late, we departed the dock on the Arroyo Colorado. The sun was beginning to peek over the horizon. I could already see flocks of pintails and teal flying high above us. As we entered the bay where we would be setting up, we ran across a shallow flat that held more redfish than I could count. The thought of getting out and wading for these big shouldered redfish almost overtook my desire to sit in a blind and wait for ducks to land or fly within shooting range. There were huge wakes everywhere; I even spotted a few large trout scurrying away from the boats path. I looked around and mentally marked the spot. I knew then where I would be heading to as soon as the duck hunt was over.

The tides have been extremely low and not having an airboat makes things a bit more difficult. We pushed the boat as close as we could to the blind and unloaded almost everything. My dad, not really having a yearning for hunting, left me, my uncle and my cousin to spread out the decoys. I mentioned earlier we got almost everything we needed, but we soon found out that we forgot (as my dad says not well prepared) to grab some munchies and a couple of water bottles. I have come to find out that when someone says I will be back in a few hours it is usually more than a few hours especially when it's my dad.

About twenty minutes into our hunt a group of blue wing teal flew low and fast in our direction. The teal saw our decoys and headed for a landing. At that instant we all pointed our guns and proceeded to shoot. My cousin Louis scored the first bird of the morning, a nice blue winged teal. Next was my turn, a group of scaup found our decoys inviting as they came in for a perfect landing. I raised my shotgun and fired two shots. The second shot hit the mark. After numerous misses at other groups of birds that found our decoy spread appealing, my uncle Louis finally scored his first. On two separate occasions when I went to pick up the fallen birds, I glanced at a distance and saw a group of tailing reds. The sun was creeping up, and the sky was clearing. Without a doubt the bird activity had slowed down; the ducks were down feeding on the grasses of the bay. I sat there in the blind wishing I could be fishing the area where I had seen those enormous wakes.

By now our thirst and hunger was settling in and my dad was nowhere to be found. Before long we were all experiencing hunger pains, loud stomach growls, and a dry mouth sensation; finally we saw my dad heading in our direction. But rather than coming on in, he stopped at that very spot where I was hoping to be. He jumped out of the boat and decided he was going to chase a few more fish before picking us up. After several unanswered phone calls, we began yelling at him to pick us up. He seemed to ignore us and continued fishing. Forget the hunger and thirst, the worst part is that I soon focused my binoculars on him and witnessed him hooking up three times before he decided he'd had enough.

As he approached us, he got a mouth full from all us. His quick reply was, "It's all about being prepared." Boy, have I heard those words more than I can remember. After loading up all the gear and hearing my dad talk about how good the bite was, we decided to give fishing a try. Big reds occupied the same flat we were duck hunting on. The fish were warming themselves up in the shallow crystal clear flat. Sight casting to them from on top was the key to a tight line. I spotted several of those big trout, but they wanted no part of my tackle. After making a few drifts and netting a couple of redfish, we decided to head on back to the dock.

On the way back I spotted a flock of ducks flying high. The sight made me wish I could replay the day again. A blast and cast trip is an adventure that must be experienced by all ages. The beauty of a sunrise and whistling ducks soaring in the sky, the tailing of redfish just within your view is all it takes to get you hooked. Waking up early in the morning has its rewards even if you have to hear the words, "It's all about being prepared." Have a Safe and Happy New Year.