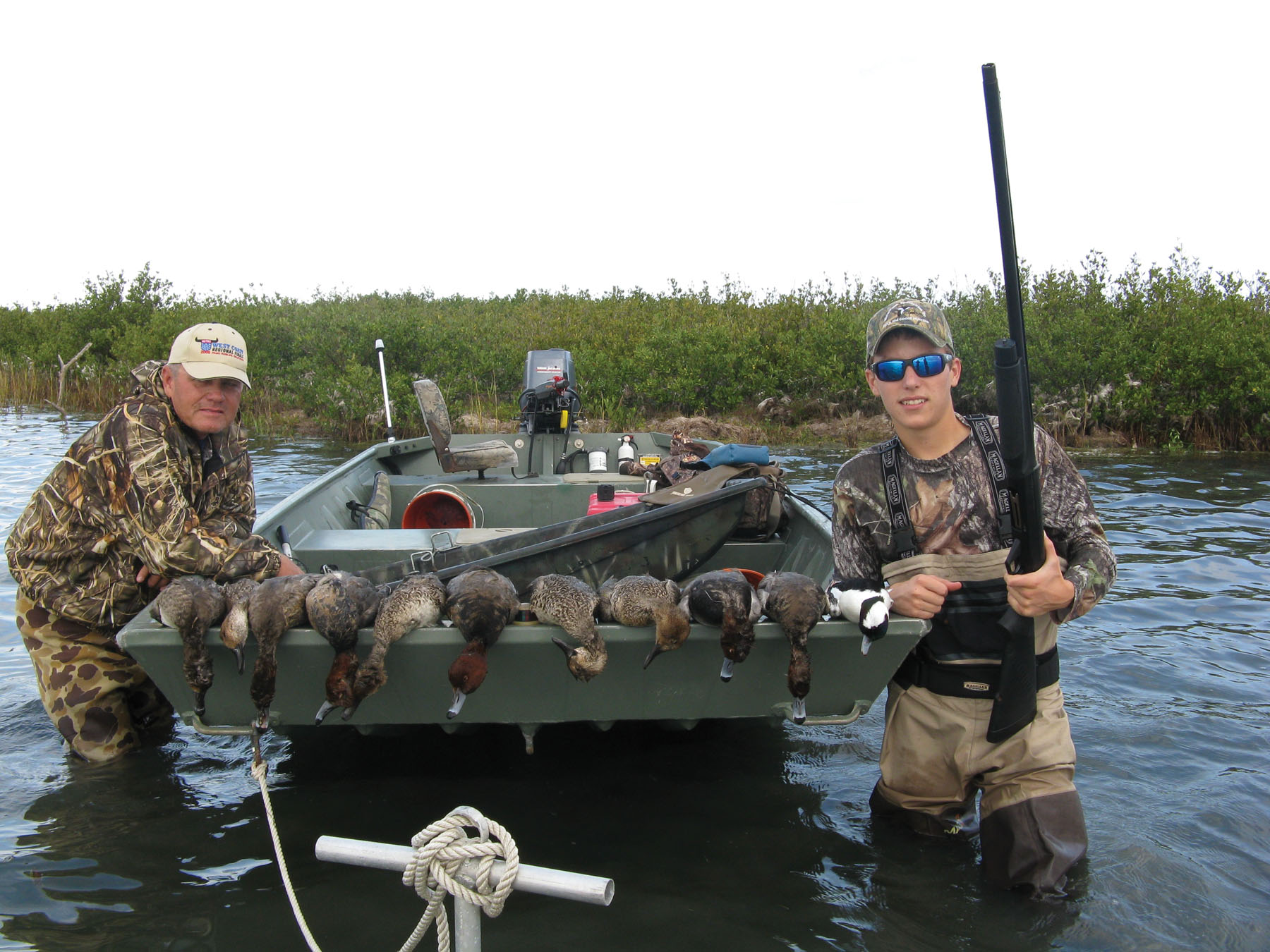 Wow, what an awesome late fall and early winter fishing season it has been. The holidays are here and I have been spending many days on the water fishing and duck hunting with close friends and family. As I mentioned in my last article, red tide has been spotty around the mid-coast, and unfortunately a small patch hit around some of my favorite fishing grounds. Yes, it killed fish, but it hasn't come anywhere near wiping out our fishing. One thing is for sure though, it has made finding fish easier, because baitfish are few and far between. Therefore, when you do find a concentration of jumping mullet, you know there are going to be gamefish, no second guessing. Hopefully this will be the last of the red tide, and you won't ever hear me talk about it again.

This time of year there are many distractions from fishing, like hunting. Duck hunting in particular for me. Fortunately, my hunting and fishing grounds are the same. So you can quickly switch to either activity. Many know these adventures as cast and blast. This usually consists of a morning duck hunt followed by a mid-day and afternoon fishing expedition. It's a very action packed, energy consuming trip, but man it is fun! There really is nothing better than starting your day with decoying pintails, then finishing it with a big gator trout on the end of your line. Sometimes to be more successful in either duck hunting or fishing, I will devote a day to one or the other. This usually depends on the weather. Such as barometric pressure, winds, tides, moon phase, etc. But still some days you just can't help but do both.

A few weekends ago I found myself in Port O' Connor getting ready to enjoy one of these cast and blast adventures. I had time for a half day to fish and the next morning to hunt, before some bad weather moved in. Without hesitation my dad and I set out in search of a big fish. We had time to fish two spots. The first spot I caught several including a pretty big redfish that fought like no other. In route from point A to point B, I couldn't help but notice a pond filled wall to wall with ducks. That got me excited! The only bad thing is there was a duck blind in that very pond. The only question was; were those hunters going to hunt that spot tomorrow? That's a million dollar question. So after I was so wonderfully distracted from my path to my next fishing hole, I idled the boat over to where I thought we should park it. Once we waded up to the sweet spot my dad immediately hooked up to a stud redfish. We continued fishing there, but the bite just wasn't going on. With hunger pains growing and the glory hole not producing any more fish we called it a day and went in to go have some tasty fish tacos.

The next morning, we quickly got our gear together, with high hopes of hunting the pond that we had found all the ducks in the day before. We were also accompanied by my uncle Mitchell who met up with us that morning. The jet drive cranked up very sluggishly with smoke boiling out of the lower unit. As we eased up to the spot where we had planned to park the boat we heard a gun shot. "Was that from the pond," we were all asking each other. Sure enough there was a group of hunters right there in their blind. They knew what was up, but that meant we had to make a last minute call. I drove the boat down the shoreline and anchored up next to a cove where a smaller group of birds were sitting the day before. This could work, I thought to myself, we've just got to give it a little time. We set up on a totally backwards wind and waited. A lone redhead came sailing in and I called on Mitchell who was sitting on the far right side for the shot. He rose up and smoked him. I felt better now that we hadn't struck out. We sat a good while before a small group of pintails came in, and we managed to take four of them out. The next set of birds wouldn't come for a while, and I was wishing for a fishing rod in my hands. Then a group of five redheads came skirting around the corner, all we needed to finish our redhead bag limit for the day. They got over the spread and I called the shot. We crumbled all five. That was a good way to end the hunt. If you have never experienced one of these cast and blast adventures, I would highly recommend it. There's a few good weeks of ducks season left, give it a shot, you will be glad you did.