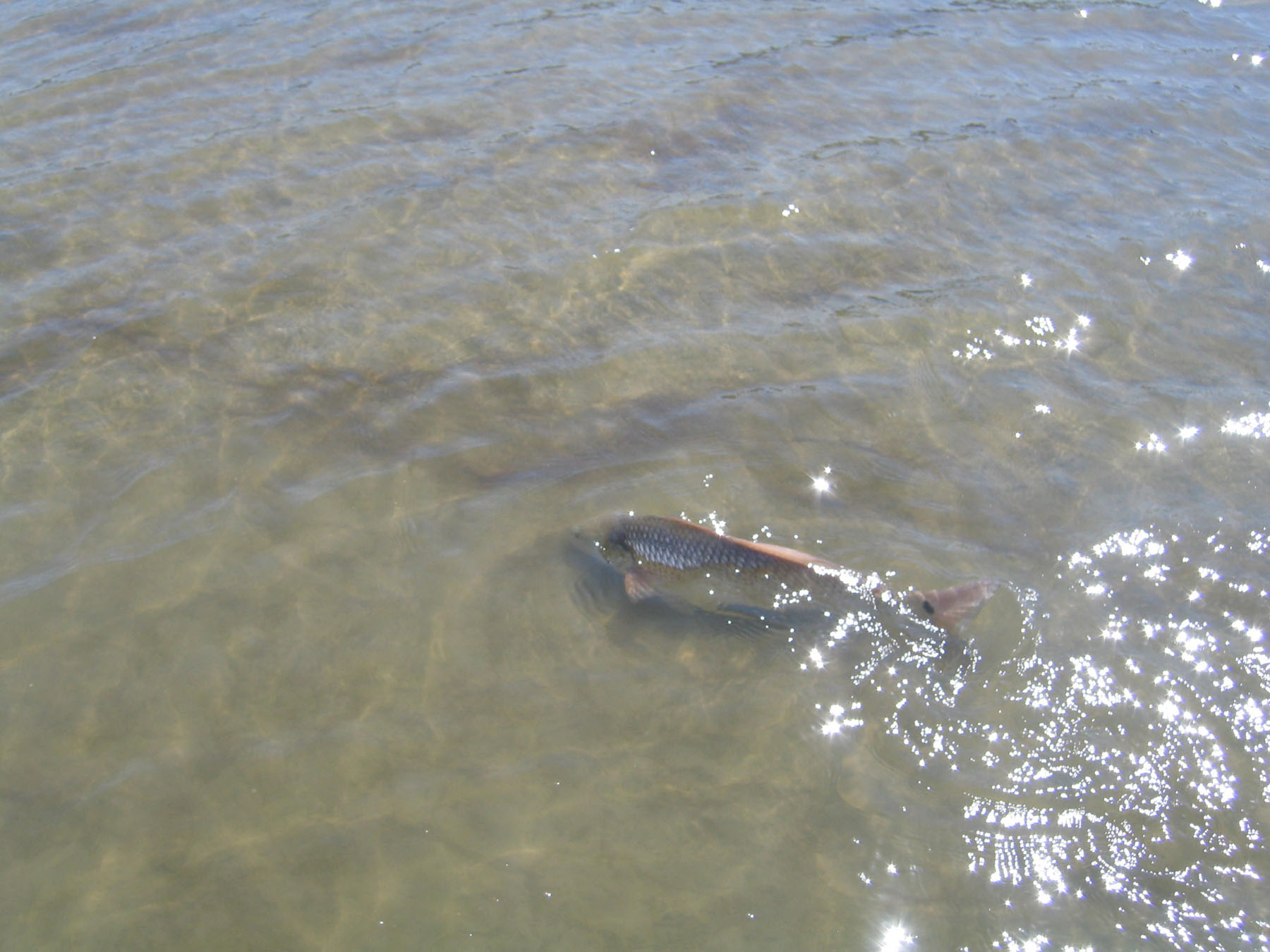 Redfish were up skinny — here is the release.

Recently, I had the awesome privilege to attend a whitewing hunt and fishing excursion to Mexico's famous Lake Guerrero. My dad and I were invited to visit and partake in the first class hunting and fishing accommodations that "Hacienda Don Quixote" had to offer. Our trip started by taking a short drive from Brownsville to McAllen. In McAllen we met up with a group of hunters from all over the state. The comfort of a coachliner was provided by the lodge to transport us to the small community of Jimenez, Mexico which is about a three hour drive south of the border.

I noticed the further south we traveled the more the terrain began to change from the flat lands of South Texas to the foothills of the Sierra Madre. As we made our way through small towns and villages, I could clearly see the culture change compared to where I reside. All along the way I was trying not to show my anticipation, but clearly, I had every reason to get excited because I was the youngest on board. I heard many good story's from hunters that have hunted extensively in Mexico. Their comments were nothing but positive and added that we would have nothing but fun and relaxation. All the more reason to be excited about my first hunt into Mexico and hopefully score my first bass ever.

As we arrived at our destination we were greeted with friendly smiles, prepared beverages and snacks right before lunch. Let me add that from the second we set foot on the lodge we never suffered from hunger or thirst. Their service was first class and the entire crew was very friendly. After our big meal, we checked into our rooms which were very clean and comfortable with a Spanish style I may add. We received a tour of the place and got to see the pool, game room, the gun room, and they even had a spa.

After our tour we dressed into our camouflage clothes and waited for our assigned van. We were each assigned a specific shotgun with a number engraved on it and given a set of tokens that we would later exchange for boxes of shells. When the vans were ready to depart, everyone jumped in, and that's where the stories began to shoot out. The fish got bigger by the minute, and the flocks of whitewing were larger than the sky. I knew then it was going to be a blast with the group we were with.

The first hunt was nothing short of disappointment, well I take that back. My dad, who has never professed of being a hunter, shot two birds using up ten boxes of shells. Birds flew everywhere and anywhere from the south, north, east, and west. It was unbelievable! I had never experienced a hunt like that where the birds flew as fast as you could load. Everyone was assigned two bird boys that would retrieve your birds. They all looked pretty busy except for the ones assigned to my dad. His looked pretty bored standing next to my birdless dad. After the evening hunt, we were greeted with a large dinner and all you can eat nachos and guacamole. Then it was off to the game room for some pool and a virtual game of skeet shooting.

For the next couple of days the hunt got better and better. The thought of missing home became an obscurity. On one of the hunting days my dad scheduled in a fishing trip instead. Our guide drove us to nearby Lake Guerrero for my first bass fishing trip. I had never caught a bass in my life and have always wanted to. This was the element that my father was most comfortable in. On the way to the lake, he started smack talking and telling me how he was going to lay it on me. I told him that I welcomed the challenge.

As we approached the lake, you could see the Sierra Madre in the distance. The lake was nothing like I imagined - no cleaning tables, boat ramps, or channel markers. Our guide, who was very knowledgeable and friendly, brought us to our first stop along a timber line drop off. I quickly learned that this was no saltwater trip; bass fishing is more of a structure thing. By the time I got the hang of it, my dad was smoking me. He would yell out, "Who's your daddy," every time he landed one. I made a come back somewhere in between, but in the end my dad laid it on me as he said he would. Experiencing a new body of water was awesome, and the fishing was certainly different from back home.

Our trip was quickly coming to a close, and the reality of leaving my best hunt of my life was now here. Upon leaving, I had nothing but appreciation for Don Turner, owner of the lodge, and the people of Hacienda Don Quixote. They certainly made our stay very welcome and fun.

Without a day's rest after our arrival from Mexico, we set foot on our own backyard, the Laguna Madre. Our goal was to sightcast to redfish in extremely shallow water and finish off our last snook wading trip for the year. As was our success in Mexico, it continued on this side of the border. We had a blast casting to redfish with their backs out of the water and even managed a good fight with a trophy snook.

On the opening day of the special whitewing season here in South Texas, I was again donning my camouflage attire. To be honest with you, after my hunting experience in Mexico, I was thinking very gloomy about seeing the amount of birds I saw across the border. With it raining everyday, the fields were going to be very muddy. Our first day hunt was tough, and the day after was rained out. The washout was okay with me because I still vividly remember my best hunt ever. If I was to compare the hunting, Mexico would certainly have an edge, but in fishing no other place in the world compares to our own backyard, the pristine waters of the Laguna Madre. If you care to see some of the things the hunting and fishing lodge "Hacienda Don Quixote" has to offer, you can browse on line at www.viphunts.com.