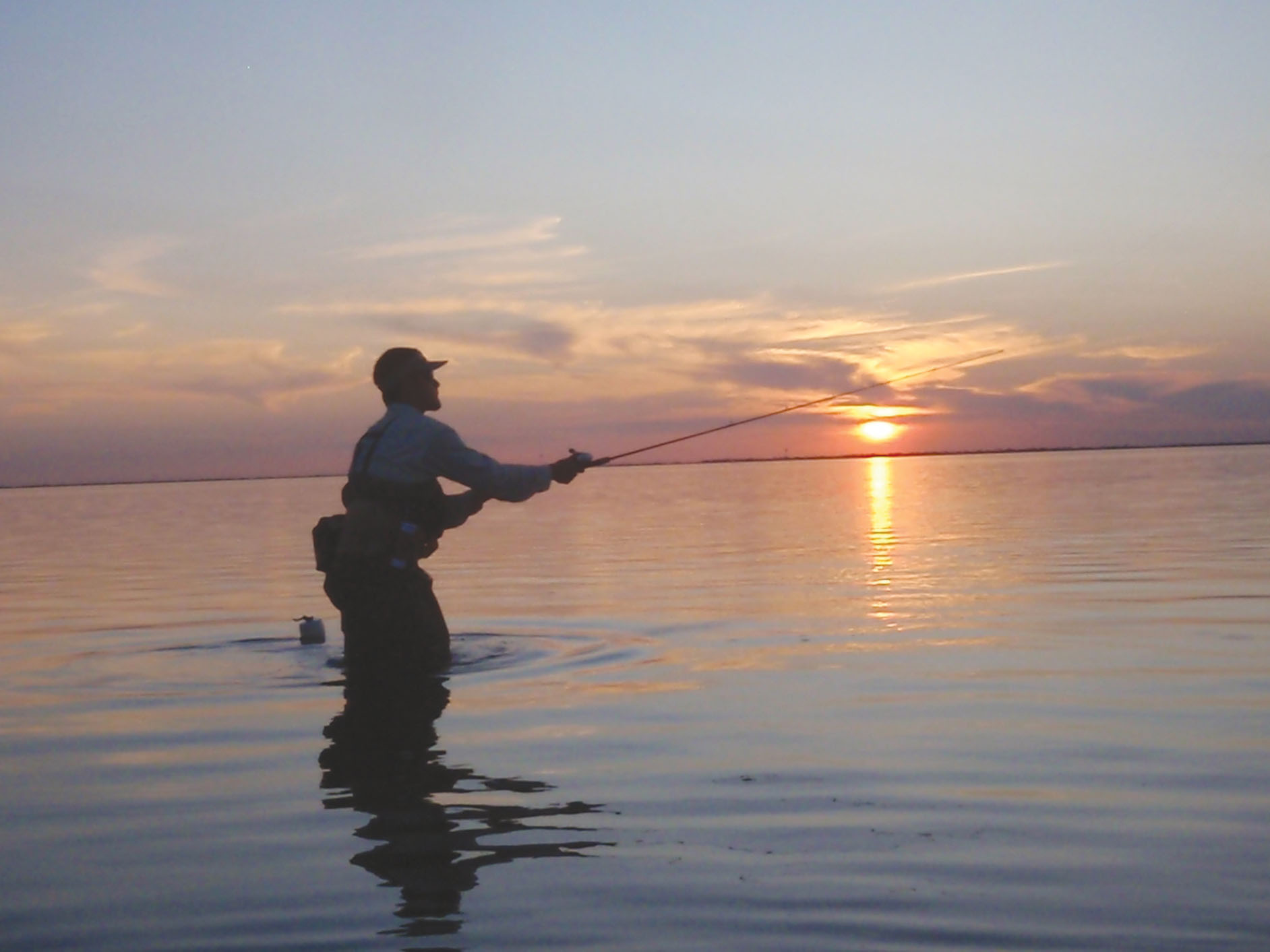 Trying to get a few more casts before the sunset.
It was a school day, and the time seemed to move so slowly. I think I was glancing at the clock every two minutes waiting for each class period to end. The day before my dad had gotten on some big trout, and he was headed out again in the afternoon. This time he invited me, but it meant I had to miss out on my last period class. After some quick arrangements, I headed out the door and into my truck looking forward to strapping on my waders and catching a few trout before the sun set. My dad was waiting for me as I quickly changed into my fishing clothes. Off we were, only a thirty minute ride to our desired spot. Along the way I had the chance to share with my dad what my plans were after high school; that was pretty cool. However, in the back of my mind was that big trout laying somewhere waiting for my plug to come across its mouth. Once we put the boat in the water, it wasn't but a five minute ride across the bay. After arriving I quickly jumped off the boat and headed in my own direction. The evening was a calm one, not a boat in site. The area looked very promising as slicks could be seen all around us. The mullet were doing their normal acrobatic jumps and an occasional, unusual splash could be heard as a mullet found itself in the jaws of a hungry trout.

The evening was magical, and I couldn't get over the tranquility of the surroundings. For a moment the silence came to a standstill while I was wading through the muddy bottom. I was suddenly startled by this loud boom of an explosion. My first reaction and thought was "what the heck was that, and where did that come from?" Turning back I saw a high rise building and was reminded that it was being dismantled. That loud but distant bang just added to the magical evening. It was like nothing I have ever heard especially out on the water. Just as soon as it came; it was gone. I then refocused on trying to place every cast in the right place.

That's when it hit me. "Why was I here? Was I here just to catch a fish or see how many I could catch before the sun would set, or was it about the experience of the chase?" A lot of things went though my mind. Suddenly, I stopped in my muddy tracks and purposely looked all around me and saw the beauty of it all. The birds were trying to get their last meal before the sun went down; I could hear trout chasing bait; a half dozen sheepshead were tailing on the shallow flats. I also spotted a couple of redfish cruising the shallows ready and willing to crush anything that crossed their path. I thought to myself, "What an awesome place to be!" The end of the evening was coming quick, and how I wish I had two more hours to enjoy this magical place and time. Before the evening was over, I was able to land a few solid trout. Nothing close to what I envisioned, but on this day size did not matter. The awesome sun set on the horizon put the finishing touch to a wonderful day and experience. Just think if you don't make the time to fish, you will never see things set before you to enjoy.

And enjoying the great outdoors is what I have been doing over the holidays. A few months back I wrote that I would be sharing my passion of fishing with my friends that normally don't have a way of getting out there, and that I have done. My friends and I tried something new the other day; we took a bunch of bait and headed down to the Brownsville Ship Channel in search of whatever species would bite. We anchored and chunked dead shrimp off the bottom. The fishing turned out great! We caught a whole bunch of different species, and I could see that every one of my friends was having a blast. I enjoyed it so much that I did it again, but this time I invited my ten year old cousin Trey Gonzales and a couple of my friends. As Trey was holding his rod, a fish pulled on his line so hard that the rod and reel was almost pulled out of his hands. After a long fight I helped him bring the fish in after he complained that his arms were tired. The fish turned out to be a keeper drum which he felt very proud of landing. As a matter of fact, my cousin Trey out fished my older friends on that day. It certainly felt good to be a part of someone's success and memories that will remain forever. I understand that growing up is hard to do at my age, but I have come to learn that life is a cycle of passing on what someone else has taught you. I'm certainly glad that I'm able to do this through my passion of fishing on my spare time. So if you have some spare time, Go Fishing!