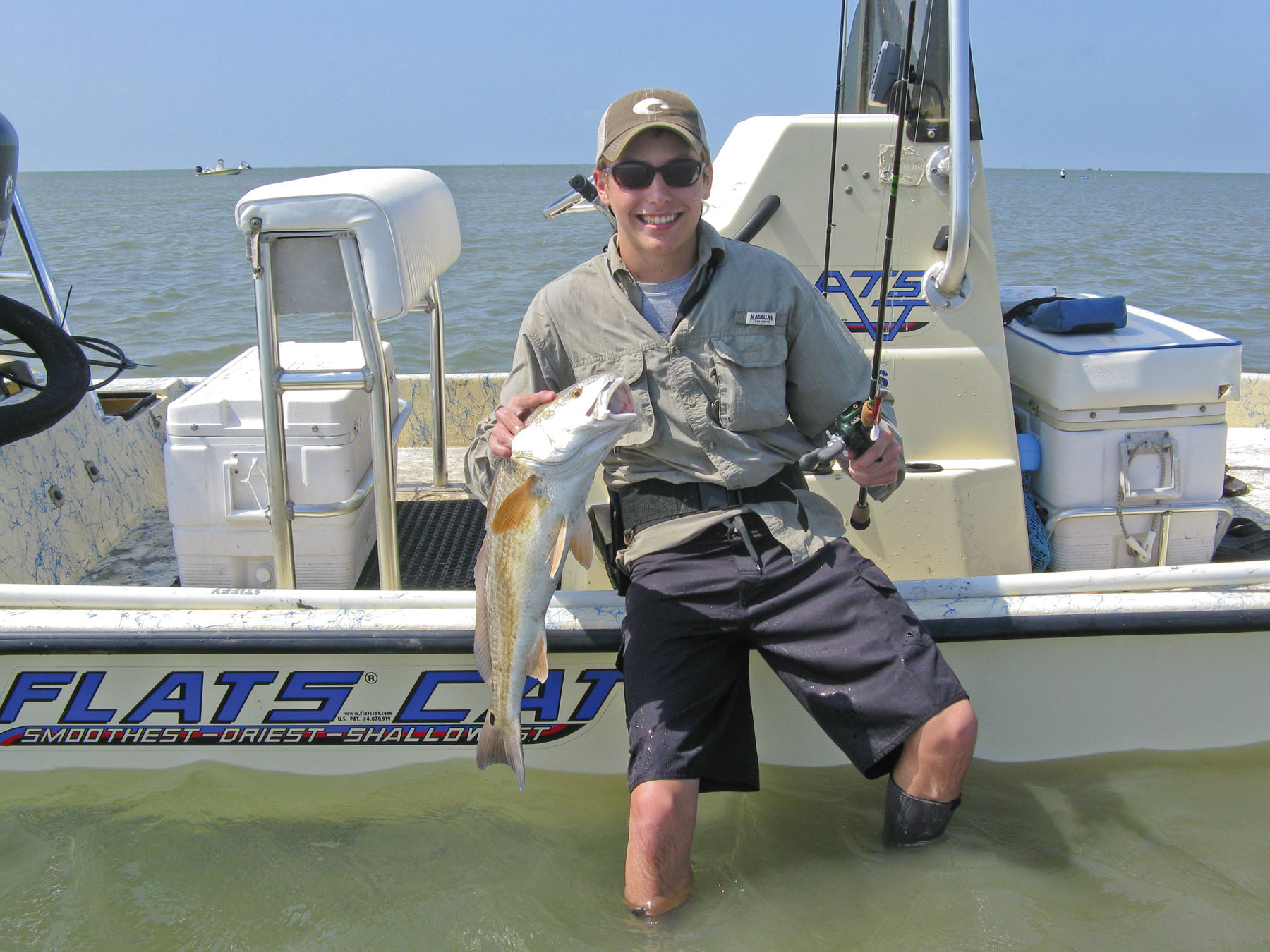 Jake with a husky red that brought a halt to the smack talk.
Now that we are in the midst of the spring season everything is looking up. The tides are coming back in, the redfish are up tight to shorelines, feeding away in back bays. It's also a good time of year to catch trout along main bay shorelines anywhere you can find a lot of active bait.

This time of year, more specifically May and early June, is one of my favorite times of the year to fly fish. When all of the shrimp hatch in the small back ponds and coves, the redfish set up for ambush. It's easy to find them too. They will be tightly bunched together, nose down and tail up, a.k.a. tailing. It's not anything to walk into a shallow little cove and be greeted by twenty orange flags. They may not be twenty-eight inch reds but you won't care because they put on a show. The best way to go after them, in my opinion, is on foot with a fly rod. You may want to be on foot because you more than likely will have to cross land or shallow oyster reefs and that is the best way to keep quiet to get really close to them. The fly rod is what I like to use for this because you can make multiple presentations in a short amount of time. Also, you can softly land flies right in front of the reds without scaring them.

All of this starts to happen when the outside temperature stays around the eighty-five degree range for a while. This year I plan to take my camera along during my wades for these tailing redfish to get some really awesome pictures for you all. The only thing I can do until then is dream about it. While the water is still trying to warm up, sometimes you can find some of the bigger redfish on more of a winter pattern. While I was in Port O'Connor over spring break, this was definitely the case.

The first day we were in POC, a bet was made between my cousin, Dylan, and I versus two of my uncles, Mitchell and Max. Of course, with money on the line I didn't come out on the winning side. That day we were also fishing the San Antonio Bay complex. I don't know this area as well as the Espiritu Santo Bay complex. Therefore, I wasn't able to find fish like I normally do. After getting a lot of smart remarks from both Mitchell and Max, I said, "Ok, tomorrow we're going to launch out of Port O'Connor and we will see who catches the fish."

So, the next day we launched our boats. Dylan and I in were in my Flats Cat while Mitchell and Max were in theirs. We made an agreement to meet at the beach at noon. So, we took off and I had a particular spot in mind. It was a spot that helped me out before when I needed to redeem myself. Actually, it was the same spot that I caught fish in that I talked about in the recent article, "Through Shades of Gray." As I pulled up to the spot, I couldn't help but notice mullet jumping right over the hole. Dylan had never fished this spot before. I told him, "Don't worry, we're fixing to catch some fish here." I asked him to walk to a little point just up ahead and throw out a topwater or tail. He put on a topwater that he always catches fish on and walked up to the point. Before I could even get the boat situated, I heard an explosion. No, it wasn't dolphin or sharks, just redfish on Dylan's topwater. I quickly walked over and hooked up with one of my favorite Hogie Major Minnows, catching back-to-back solid reds. We continued to fish down the shoreline catching fish the whole way. We let most of the fish go, but kept a select few to stop the smack talking. When we met up at the beach we asked them if they caught anything. Of course, Mitchell was flaunting how he walked up on a herd of fish and sight casted to three big redfish. Then, he asked how we did. Dylan and I pulled out the two redfish we had kept then said, "Yeah, we let the smaller ones go." His response was, "Man, the fish I caught were big, but not that hefty." We didn't have to listen to his smack after that.

Now, as I am sitting down to finish up this article I'm realizing how warm of weather we are having, and I am loving it. Thinking back to last spring I specifically remember fishing Easter day, and being in waders throwing Corkys. However, this year shrimp are already hatching and/or have hatched, with redfish hot on their tracks. This is just something to think about.