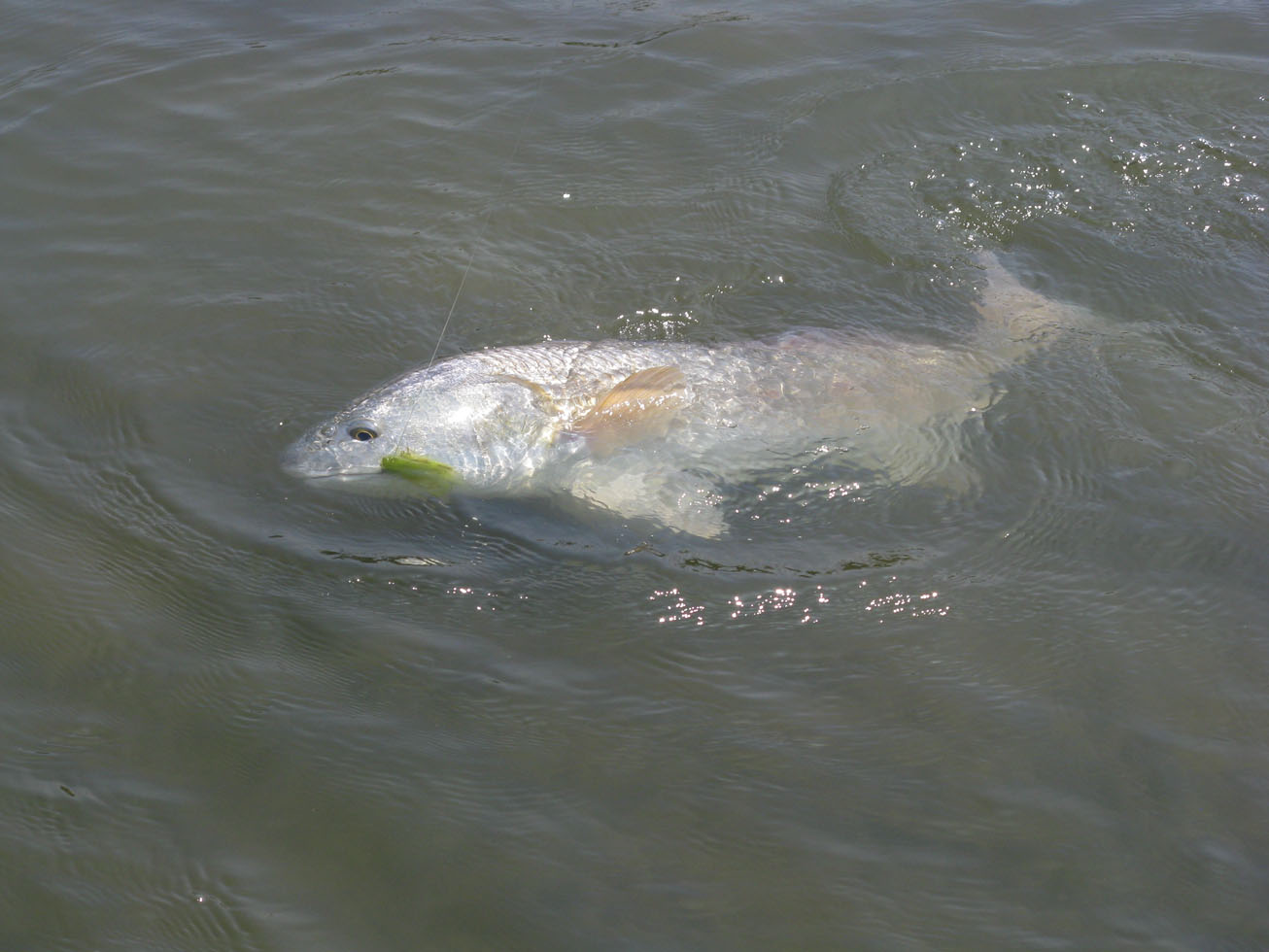 A few weeks ago, I went on a fishing trip in Port O'Connor that once again was phenomenal. I caught about fifteen redfish while fishing only a few hours. Only two of those reds were in the nineteen to twenty inch range. The majority of all the fish were caught on a fly rod in an ever so shallow foot of water. They were on the shrimp hatch pattern, which I discussed in my previous article, but these weren't small schooling reds. There were some pods of smaller tailing fish, but most were upper-twenty solos and doubles.

As soon as I walked into the cove, the cloud cover was too thick to really see anything well. But, as I approached the back, where I always like to fish, the sun came beaming out. As the sun appeared, all of the redfish came out of hiding. I tied on a Hogie major minnow, which is what I always use for sight-casting and began looking for targets. I saw one coming down the shoreline and made a cast but got a quick refusal. "That was weird," I thought.

I changed colors and tried again: same thing happened. When the lure got close the fish would just blow up as if they had seen a ghost. Now I really began to study the fish. What are they eating? Why don't they want what I am presenting? I walked over to a red that was nose up in the grass slowly eating at something. All of a sudden, I came to the realization that it was the shrimp hatch, tiny shrimp only about an inch long. That's why they wouldn't eat a shad tail. As I turned to go back to the boat to get my fly rod, I spotted a solo red about forty yards off. I launched a cast out to it and reeled it in as fast as I could to get a reaction strike. Surprisingly, he ate it. I still made my way back to the boat, leaving behind a lot of fish. Maybe not the best idea, but that's just not how I wanted to catch fish.

I got back to the Flats Cat, grabbed my fly rod, and tied on the smallest shrimp fly I had in my box. Then, I made the eighty yard or so wade back to the fish. I started to walk down the shoreline and spotted my first victim. I made a good cast and pulled the fly right in front of his nose. Without any hesitation he flared his gill plates and sucked the fly right in. Without missing a beat, I released the fish. I looked up and spotted another red in front of me. I made the cast and hooked up. I then realized that the fishing was going to be easy.

The next fish I hooked into was noticeably larger than the other two, and got into my backing when I hooked him. It was unusual to see such large reds feasting on the newly hatched shrimp. The next red I spotted was about fifty yards off and I had to question if my equipment would hold up if this monstrous red just in case it engulfed my fly. Unfortunately, the red wouldn't eat; he knew all the tricks. That may have been a good thing because I really didn't want to burn up the drag in my fly reel, but it would have been fun in the process. I continued to catch reds until the tide fell all the way and the fish pulled out into a deeper end of the cove. I tallied up sixteen reds that day, only five on conventional tackle, and didn't keep a single one. That is an impressive day; I don't care where you're at, especially when the smallest red was in the nineteen to twenty inch range.

Well, what did I learn from this trip? The term match the hatch came to mind. Also, big fish don't always eat big baits. You might want to pay attention to the fish if they're not hitting your lure or fly. Then, backtrack and think what you saw them eating or was able to observe in the area and make a switch. Match the hatch and throw what they're eating!