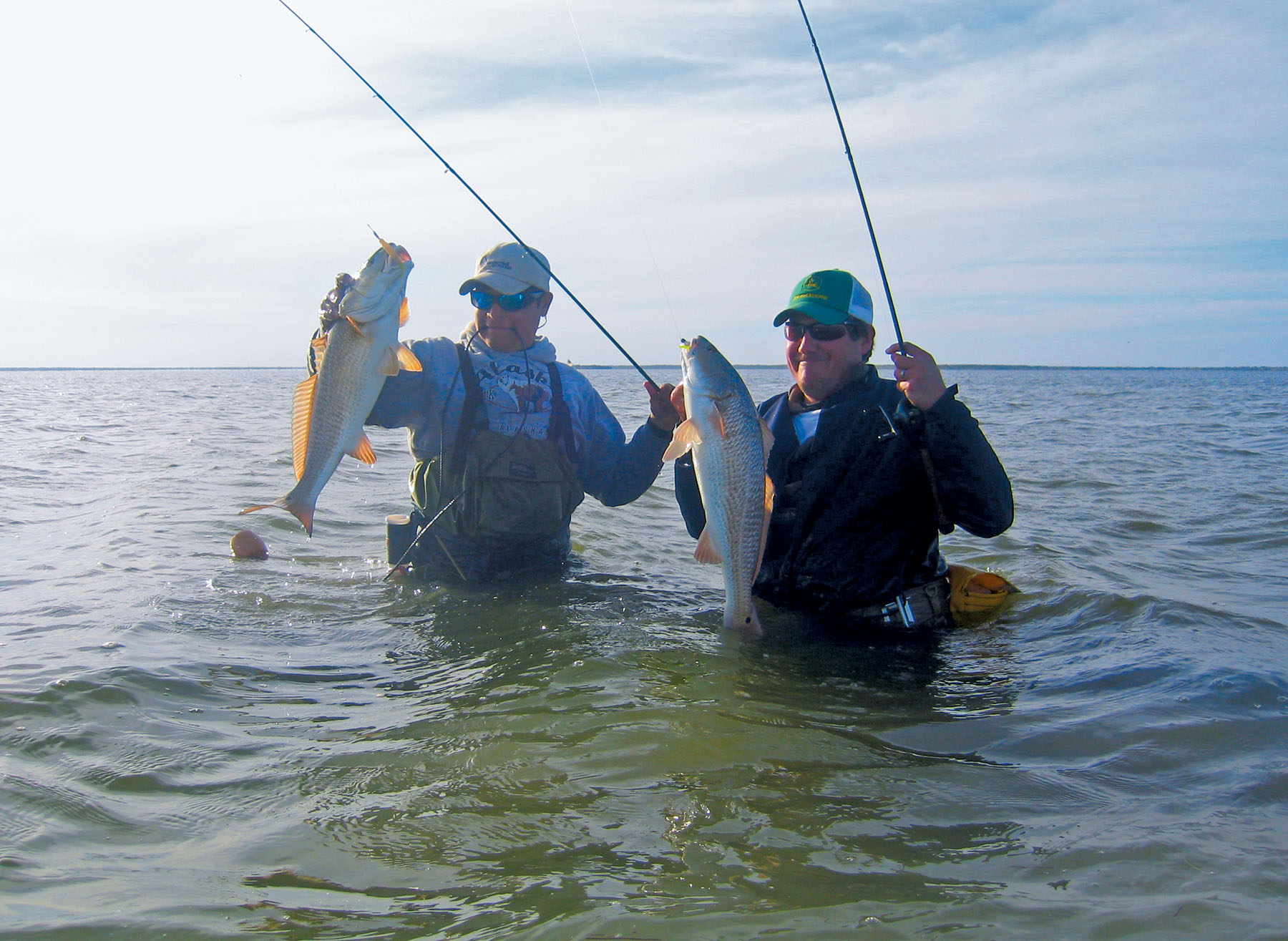 The weekend finally arrived. I was filled with excitement because not only were we going to fish all weekend long, but we were also going to spend the night at a friend's house on the Arroyo Colorado. It was there that we met up with Richie Homminga who has fished with us before. Unpacking in the home filled with a large variety of mounted game in every room gave me the sense of being in a lodge. The mallards, pintails, rattlesnakes, snook, deer of different species, bear rugs, and the huge moose that hung in the living room made it all more comfy.

Part of going fishing is getting your equipment prepared the night before, so we each got our wading stuff together, made sure the reels were working properly, and placed our favorite lures in our boxes. I made sure a Baby 1-Minus was in my box. After all the preparation, we went to bed around mid-night looking forward to the next day.

In the morning we woke up to chilling temperatures, so getting an early start was not that important. We put on our waders before leaving the dock and made a quick run to our first spot. The water was a bone chilling fifty-one degrees, and a brisk north wind made it a very cold morning. Our hands went numb shortly after they made contact with the cold water.

Our first stop showed no signs of bait around, so we moved on to the next which showed some promise because it had a few jumping mullet. As we waded into a small area with a muddy bottom, we got into a short lasting redfish bite with each one of us landing one redfish apiece. Our next stop produced a few trout, but by this time we all realized it was going to be a tough bite day. We did manage to land a couple of more reds later in the day. All day Richie kept enticing us about how great his gumbo was. As the first day came to a close, Richie's gumbo started an appetite in me as we headed back to the dock. He was right; the gumbo was delicious.

At the start of the second day we awoke to even colder temperatures and a breezy morning. A front had blown through over night. My warm bed was starting to sound good to me. But, the idea of catching a big trout won over the warm bed situation. We fished different areas than the previous day. The slow bite continued to come our way, but our expectations were still high. Other areas we waded faired no better than the rest. It was in one of these areas that Richie brought forth a challenge. He said the person with the least amount of fish would wash the dishes and clean up. Being that we were releasing all of our fish, we had to keep an honest count. My father quickly replied that he needed a handicap because he was the one retrieving the boat. Both Richie and I gave him no lee-way. It was every man and kid for himself.

By this time it was around 2:00 PM, and Richie and I were head to head with two trout apiece. We moved on to the next location; it was there that we ran over a big group of redfish milling around a mud hole. My dad suggested that we should leave them alone, so that they could regroup. We tried our luck at sight-casting, but it was very difficult due to the glare.

My dad and I did witness something that we had never seen before. On one particular pothole there was a big trout sitting on the bottom. We all saw it, and each one of us got a chance to cast at it several times before we drifted away. At this point Richie was so determined to catch it, that he jumped off the boat and continued to cast at it six more times. The entire time that this was happening, my dad and I were laughing really loud because we could not believe what we just saw. He did not catch the trout, but his effort was great. It would have made a great story if he had caught it.

By this time we moved into the very spot where we had seen all the redfish. Richie reminded us of the dirty dishes and off we went as my dad anchored the boat away from the area. From the second cast on, it was redfish after redfish. Immediately, Richie and I started to double up as the action got red hot. The funny part is that my dad was still messing around with the boat. Richie then yelled at my dad and asked him, "Who is washing dishes tonight?" A short time later my dad joined us; Richie and I had ten reds apiece. My dad instead of fishing began taking pictures and recording the incredible bite. I personally thought he used the camera to have an excuse to why he didn't land as many as Richie and I. The action did last into the late evening, and we made sure we kept a count of how many fish we caught and released. The bite was so good that we stopped counting double hook ups and went for triple rod bending hook sets.

At one point I tied on a baby-minus one, and the redfish gobbled it up. Anything you threw at them was like eating Richie's gumbo. The bite was non stop, but we finally decided to call it a day as the sun was setting. The final tally was Richie twenty-eight reds and two trout. I had twenty-five reds and two trout, and my dad, the dishwasher, had ten reds. What a way to cap off my weekend. As we headed back, all you could hear was my dad's excuses and how he hated to wash dishes.

This time around we did give him a break. While he cleaned up the boat, Richie and I washed the dishes and cleaned up the place. The finale to a fun filled weekend was eating a hamburger at one of my favorite restaurants, Chilly Willies, in Arroyo City.