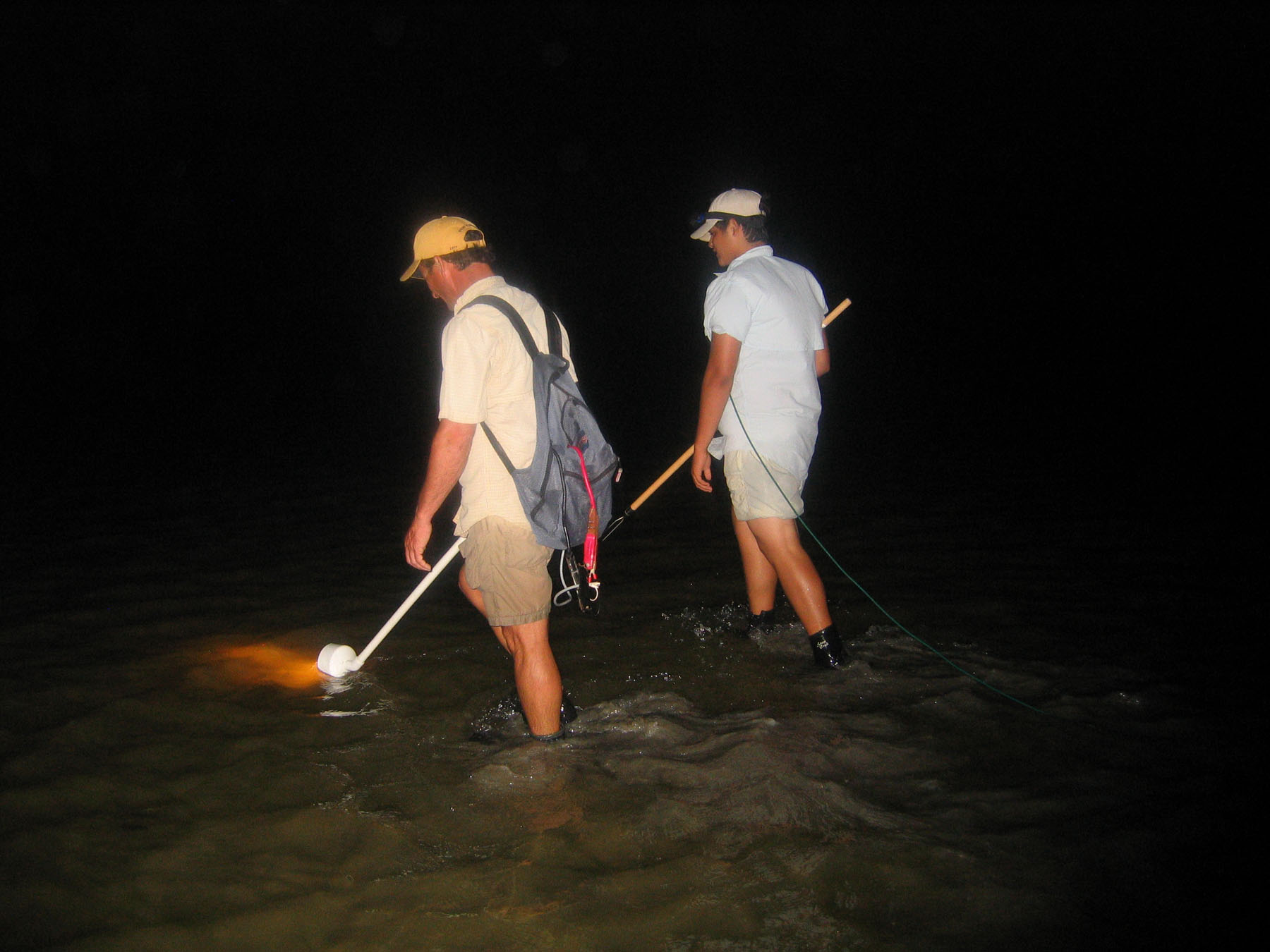 Having the right equipment makes it much easier when gigging for flounder.
Right before school was let out for the summer I got invited on a flounder gigging trip. It sounded like lots of fun and it got me into thinking that gigging for flounder would be something that I would truly enjoy. It so happened that our good friend Capt. Eddie Arenas was planning a trip to his cabin on the ICW; and this was a perfect opportunity for us three to get out in the dark and chase door mat flounders.

Last year the flounder never really showed up here in the Lower Laguna Madre. You would hear of a few good catches, but they were far and in between. This year has been an exception; some good numbers of flounder are being caught and gigged along the Arroyo Colorado and sand flats out in the bay. Those who are fishing for flounder specifically are doing very well.

As soon as we arrived at the cabin, everyone got busy preparing dinner, setting up lights to attract night prowling trout, and getting the gigging equipment ready for my first-ever gigging excursion. During our dinner conversation my dad mentioned that it's been over twentyfive years since he last went gigging, and for Eddie it had been a span of more than five years. As for me, I had never been gigging and the moment could not come soon enough.

We anchored on a spoil island near the ICW, one with a hard sandy bottom. As we waded in eight to ten inches of water, Eddie coached me on what to look for and how to stick a flounder. The shoreline was full of small bait which was a good indication that our bottom dwelling quarry might also be there. We walked into the current so that we wouldn't cloudy up the water. The waterproof light allowed us a good view of the sandy bottom. We saw crabs, small pin fish, lots of stingrays, and about a dozen flounders.

The moment had finally arrived; I spotted my first flounder and wasted no time in applying my newly learned skills. I was able to gig my first flounder. The rush of excitement was everything and more of what my friend had shared. Now I know what he was talking about when he mentioned how much fun spotting and gigging flounder really is. After stringing my first flounder, I was ready to find some more. And that I did, even my dad got to gig one.

The thing that surprised me the most was how shallow these flounders could be found. I imagined them being harder to spot, but actually it was very easy to distinguish their color patterns against the light colored sand. The stingrays were harder to spot as they buried themselves on the bottom, and there were plenty of these feared creatures around.

The whole trip was a blast, but there was a sad twist to it. We strung four good size flounders and dragged them around as we searched for more. Along the way we even bragged about how much good eating they would be. In our thoughts we must have prepared them a hundred ways. As I gigged our fifth flounder, I reached for the stringer, and it felt too light than before. I brought the end of it; the flounder and float were gone. The end knot came undone, and the flounder slipped away. We felt terrible especially after all our hard efforts. Searching frantically as we retraced our steps, no sign of our harvest or the stringer float could be found. The happy ending was that we were able to keep one flounder for the grill. Oh well, an educational but costly experience.

I also got a chance to fish under the lights on this trip and that is always fun catching trout after trout until your arm becomes exhausted. I can say I learned a lot about gigging flounder including how to lose your precious catch. I look forward in the near future to doing it again. With good numbers showing up this year you actually have a good chance of spotting some of these camouflage doormats.

If you're like me, someone that gets excited when a new outdoor experience presents itself, then gigging for flounder would be something you would truly enjoy. Starting with the right equipment is a must. A good under water light powered by a battery, a good set of eyes, a sharp gig, and a stringer that will not come undone is always important. You might even want to consider a pair of stingray protectors. The best part about flounder is that they are delicious any which way you prepare them. The summer months are perfect opportunities to get out there and chase these camouflage creatures. So what are you waiting for, get out there and go get some. You will have a blast!