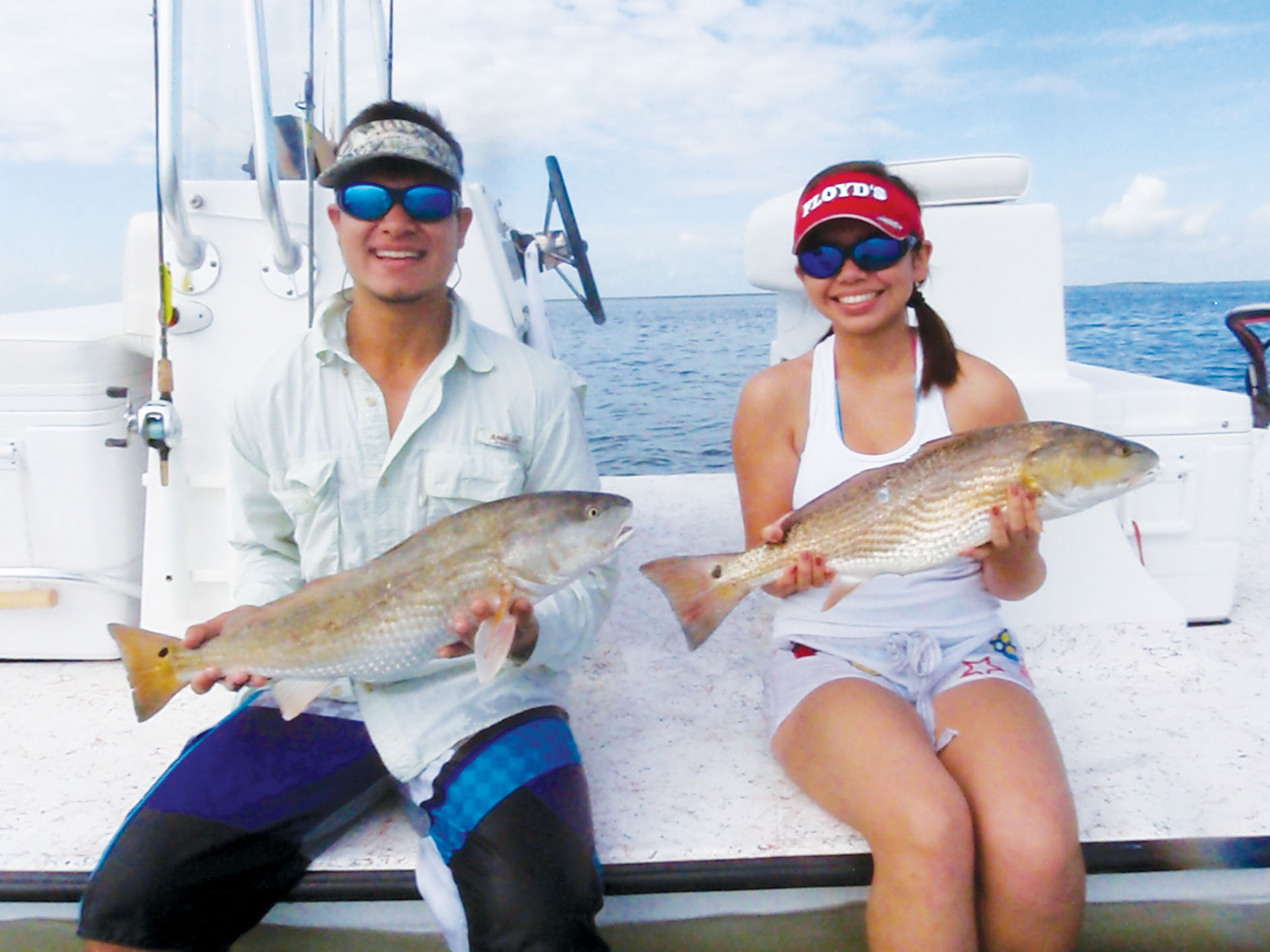 Catching redfish never gets old.
This is a busy time for me, trying to balance school, football, family, friends, and my love for the outdoors. For the last couple of months I have not been able to get away as much as I would have liked too; something always seemed to get in the way. It didn't help that my old boat was in the shop being refurbished to become new again. It took awhile, but when I saw the finished product, it was certainly worth the wait. My boat was completely redone from top to bottom and sporting some new features that made it look just like new.

Having my boat looking like new, inheriting my dad's outboard which is still in great shape along with a fairly new aluminum trailer, I was eager to get out and do the thing that I so much love to do. I wasn't the only one that was excited; my girlfriend Melissa was as excited as I was to join me the next day. While getting everything ready the night before I could hardly wait for the sun to rise. As morning came, Melissa showed up early at my house, and off we were in what seemed to become a beautiful morning.

Arriving at the dock in Arroyo City I backed up the boat perfectly. I'm sure glad the days where it would take me ten minutes to back the trailer are gone. We quickly put our wading boots on and left the dock as the sun was rising. It felt like I was on a new boat, and the fishing was going to be great. What an awesome feeling! I know that I have traveled out of the Arroyo Colorado countless times, but this time it felt special. Being that it had been a while since I had been out fishing, all the old things appeared as if they were new. I saw the same mesquite trees, the same bluffs, and even the same water buoys, but this time they seemed different. I saw them with a different perspective, and that was one of appreciation of just being able to get out and enjoy the surroundings. I thought to myself many times we take things for granted and miss out on the whole picture. I guess the time off the water made me realize that old things can bring new experiences as I was already experiencing so early in the day.

The water was as smooth as glass as we ran up on a flat; wakes were forming everywhere marking the presence of redfish. I anchored the boat, and to my surprise Melissa was the first one to jump out. I pointed her in the right direction, and it didn't take long for her to get on a bite. She was getting blow ups on her top water about every other cast. I have to mention that since the last time we were out fishing together, her confidence level has risen so much that she started smack talking saying that she was going to catch more fish than me. At one point she told me to be quiet because I was scaring the fish and making her lose her concentration. I just could not help but laugh about her reaction and competitive spirit. We got into some good action, and we were both catching fish when she came up with something I had never thought of or heard of. She said, "Have you ever thought that the redfish on your stringer is related to the redfish I just caught. Maybe they're brothers or perhaps his uncle." At that point I just burst out in laughter.

Wading through the calm water and enjoying every minute, I was again reminded of the fond memories some of these fishing spots had brought in the past, and now they were bringing new memories and new experiences. This is where my title derived from; all these old fishing spots had become as new again because of the time I was away. There anchored sat what once looked like an old boat now a "new" boat. At that point I looked over to Melissa, and her rod was bowed over. She waved me over as to say there were more fish where she was standing. All I could think was "what a great day!" We both caught plenty of redfish and had a blast. I saw old things and experienced new things. Melissa showed what a fisherwoman she has become. The trip hadn't even ended, and she was already asking me when we were coming out again.

It felt so good to get out and fish; I can't wait to get out there again. The boat ran great, and I just love the new look. I eagerly await the new experiences that it will bring. Remember, that just because something is old, it doesn't mean that it can't become new again. I think that we can apply this to life; it's all in the way you perceive things. Get out there and fish and make sure that fire still burns.