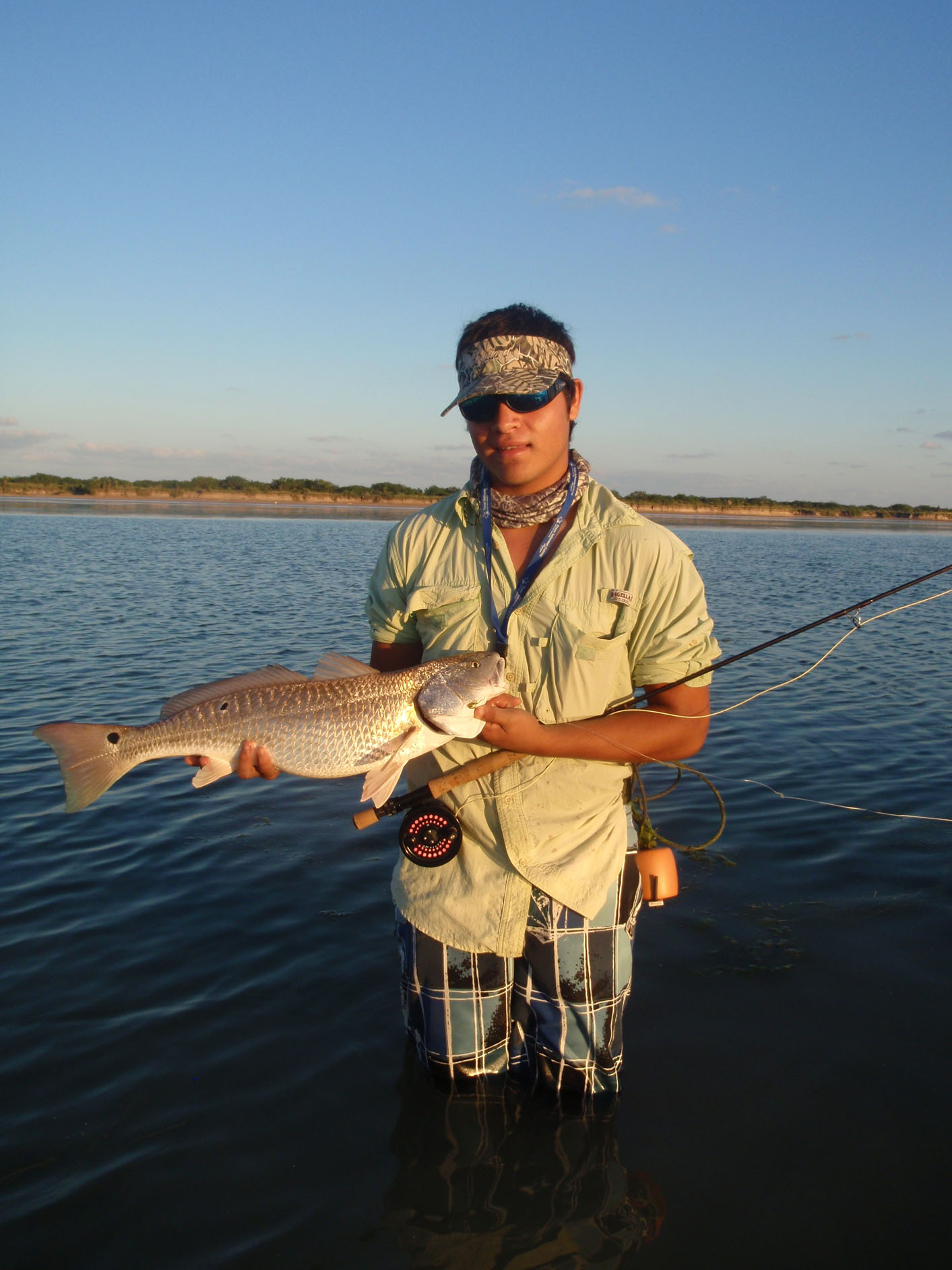 Author's first redfish on a fly.
It was a beautiful, calm Sunday morning; my mom was busy doing her annual fall cleaning, and my dad and I were getting ready to go to church by ourselves. After dressing up in our Sunday best we hopped in the car for a very short ride to church. On the way there my dad commented, "Man, isn't it a beautiful day to be out fishing." I swiftly agreed because I have to admit that the thought of coming back from church and going through my mom's intensive cleaning regime did not sound as appealing as being out on the water chasing fish with my dad.

As soon as the service was over, I headed out the door with my father not far behind. We practically beat the door greeter out the door. Since the conditions were favorable for fly fishing, I decided to take the long rod out, fully committing myself by leaving my baitcaster at home.

Upon arriving to one of our favorite secluded lagoons we were not disappointed when we saw scores of big redfish, schools of sheepshead, and sighted a few large trout in bathtub clear water. Rigging the fly rod seemed like eternity, but I finally tied on a popper and jumped in the water in pursuit of my first fish on a fly. I headed to a calm shallow flat with grassbeds hoping to find signs of tailing reds, and it didn't take long to find the first one. You must know that I am a novice when it comes to fly-fishing, having tried it only once before and not being successful at it. Quietly approaching this fish, I made a short cast. Correct or incorrectly; I don't know, but it landed close enough to attract its attention. With a flip of its tail, it lunged and grabbed the popper heading straight for a grassbed that was full of moss. I had the fish on for a less than a minute before it broke me off. What a disappointment, but a thrill at the same time. I continued looking for my second opportunity when my dad called me over to where he was fishing. From the looks of it he was on some great redfish action on topwaters.

What happened next was learned from watching fly-fishing on TV shows. My dad tossed his topwater as far as he could into a school of redfish. When the redfish tried to grab his lure, he would reel as fast as he could with the redfish in hot pursuit. As the redfish got within my casting distance, I put the fly right under their nose. After numerous misses I finally got one to inhale a spoon fly, and the fight was on. What a fight! It was quite different fighting a fish on a fly rod; I enjoyed every second of it. Finally, I landed my first redfish on a fly. After that first redfish I managed to break off twice before heading back to the grassbeds and trying to catch one on my own.

Walking through the clear water and spotting lots of sheepshead and dozens of blue crabs was a pretty sight. Now all I needed was to see another redfish to give me an opportunity. There he was milling around a grass line. With my heart pounding and adrenaline rushing I made a perfect cast, and bam he was on, stripping line like a bull out of a cage. After a good hard battle my second redfish came into my hands. I was feeling the excitement, and I could tell that my dad was happy for me too. Only those that have ever caught a fish on a fly know exactly what I was experiencing. I knew then that the Lord had heard and answered my prayers earlier that morning because this experience was beyond my expectations.

After four fun hours and the sun setting on the horizon our evening was soon coming to a closing. I was grateful to experience such a meaningful accomplishment and certainly look forward to doing some more fly-fishing in the near future.