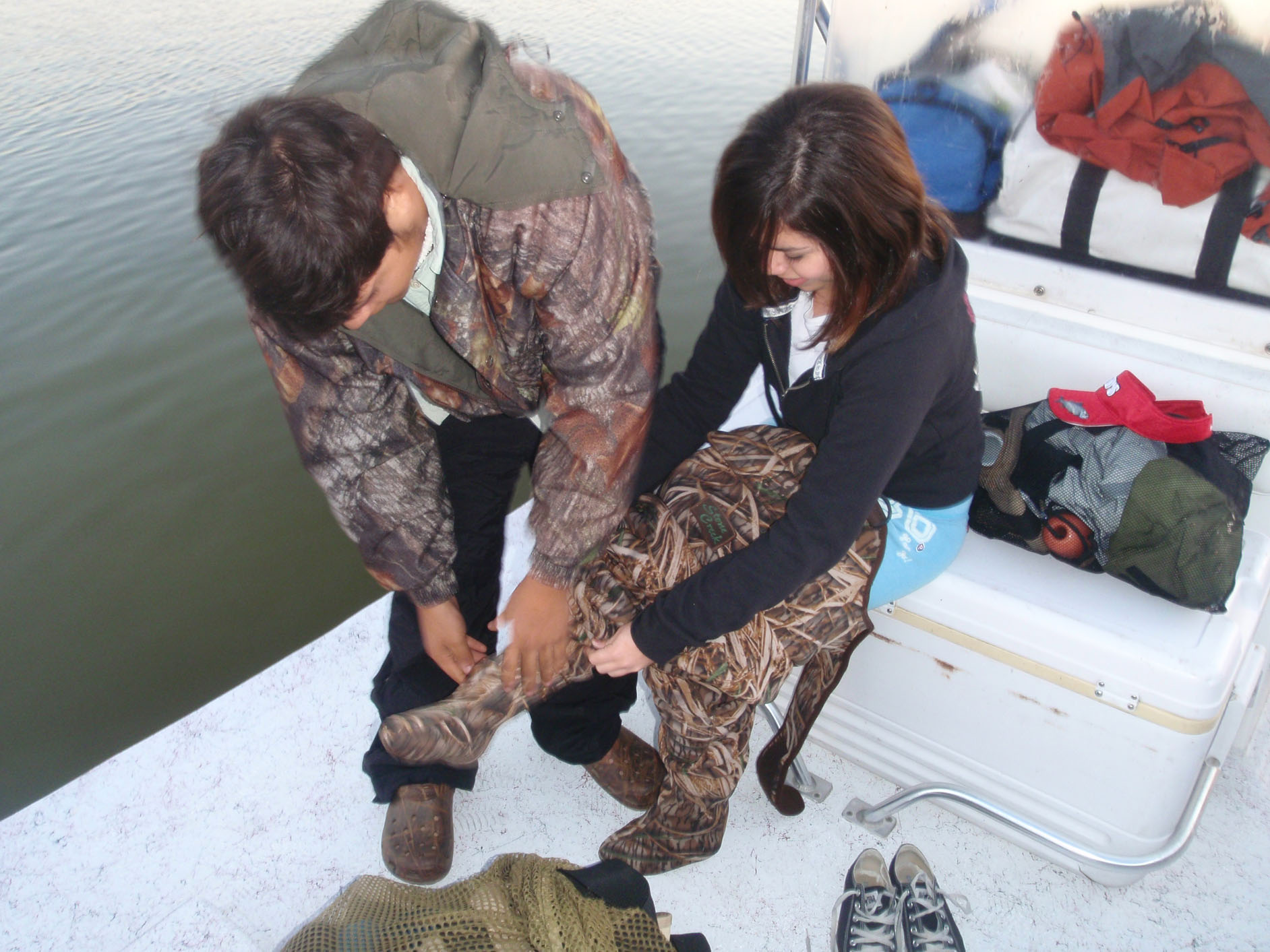 Aaron lends Melissa a helping hand.
A few months back I wrote an article that some of my goals for this year were to introduce and involve more of my friends into the sport of fishing and hopefully make a difference in their lives through the sport I love. Just recently a special day took place. I had been inviting my girlfriend Melissa out fishing for sometime now, but for some reason or another something always got in the way. Whenever our conversations would lead to fishing, she always commented, "Oh fishing is easy." Little did she know what her first experience would be like. You see Melissa had never been fishing before, and I was determined to start her off with some intense wading. I took the chance knowing that she was either going to love it or just plain hate the idea of getting in the water.

The morning began with a wake up call; I called her at five-thirty in the morning. As she answered the phone, I could hear her nagging that it was too early to go fishing. Arriving at the ramp I sensed a bit of excitement from her as well as from me. I helped her with the wading gear while convincing her that she would not fall off a boat without sides. All geared up and ready to go I glanced her way and never had I seen her so serious. What a priceless moment!

Being that this was all new to her, she enjoyed watching the dolphins feeding on the ICW, the brown pelican's nose diving for a meal, and seeing happy mullet jumping in the air. Entering into this calm bay I pointed out a good number of redfish wakes, and finally coming to a stop I explained to her how to tell the difference between redfish and baitfish wakes. I could tell that she was acting like a sponge and absorbing everything that I was sharing with her. She also had a hundred and one questions for me.

A bit hesitant she stepped off the boat and into the water. I made sure it was a friendly and firm bottom. As I began to instruct her on how to properly wade through the water, I could see mud boils in every direction. I knew then her chances of getting her first keeper were good.

The hardest part was teaching her to cast far enough to catch her own fish, but after working with her for about forty-five minutes, she was ready for the next step. That more difficult step for a first timer was wading, casting, and working a topwater all at once. I would have to say she caught on pretty quick. She soon had a redfish rise behind her topwater and take a swipe at it. Not knowing how to set the hook she pulled it away from its mouth. Seeing that redfish behind her bait was well worth the trip, and to tell you the truth it got me even more excited about the prospect of her landing her first keeper.

She hung in there casting non-stop as I landed red after red. I kept encouraging her knowing her time would soon come. I came upon a big pothole that had redfish written all over it. I instructed her to cast into it and expect a bite. As soon as I said that, she was on her first redfish. Boy, the excitement was at a high level and her look was "what now." While coaching her through what seemed like an endless fight, I couldn't help from laughing as I watched her switch the reel from one hand to the other. As she fought the oversize fish, I reminded her of her very own words, "Fishing is easy." What a blast to see her land her first redfish and a big one at that. I don't know who was more excited, me or her.

As she brought the fish to her side it swam near her leg and she began to scream in fear of the fish harming her. My laughter was non-stop, especially when she said that the fish looked sad. We took some photos and released it, but it didn't take long for her to be hooked up again. Despite her fears I think she's hooked for life.

Walking back to the boat I remembered that whenever my male friends fished with me, they always wanted to stick next to me being scared of what laid on the bottom, but not Melissa. Several times we separated yards apart, and never did she complain. I was very proud to be a part of her first fishing experience.

On the way home, exhaustion kicked in and she passed out until I reached her doorsteps. She shared with me the next day that she was sore from muscles she never knew she had, and her sunburn was extremely painful. She also said that fishing with me was a blast, but never did she imagine it would be so difficult. In the end I was so glad she caught a keeper, and I'm even happier to know that I caught one too. "She's a keeper!"