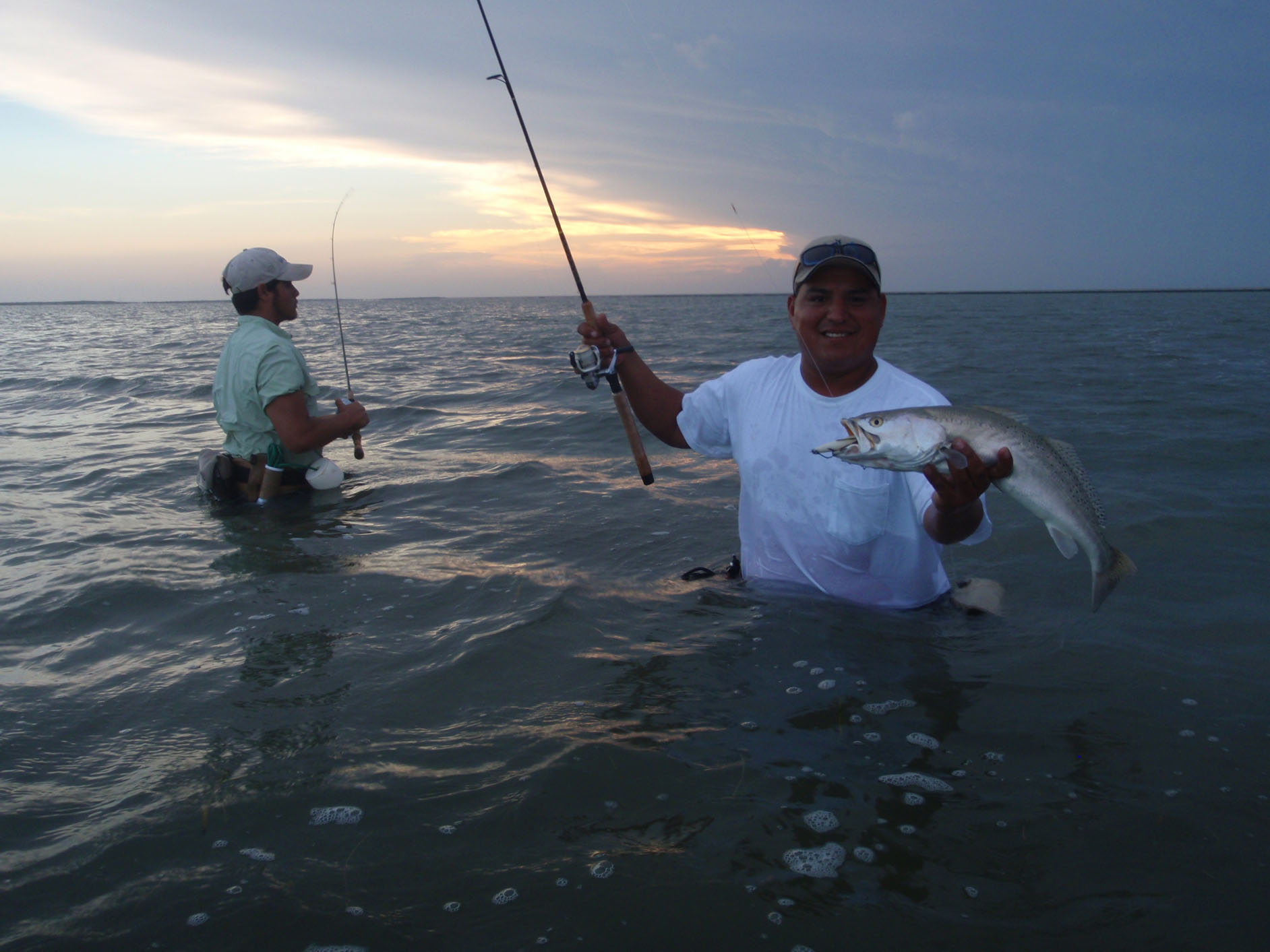 Before a late evening thunderstorm the trout bite turned on.
In this issue I want to mention and share about an occurrence that can happen to any boat owner. If you read my last article, you know that my lower unit gave out and my boat was out of commission for a period of time. When my lower unit gave out, a kind-hearted man towed us in safely. Being stranded in the middle of nowhere when your outboard breaks down comes with the territory of owning a boat and spending time out on the water. If anything like this has ever happened to you, you'll know the feeling. I have had a couple experiences like this while out fishing with my dad. When this mishap occurs, you will have two types of boaters around, those that drive by perhaps never seeing your pleas for help or in some cases just do not care. And then there are the ones that go out of their way to get you going like that old man did for me. There is a saying, "What goes around comes around." Or like the scripture says, "You reap what you sow," meaning a small favor can go a long way.

Last year during a late evening of fishing, my dad and I were heading back when we came upon a stranded boater. We stopped and eventually towed his boat back to the dock. While towing him in we struck a conversation. He recognized us from TSFMag; he also mentioned how much he enjoyed reading our articles. After getting him back to his boat slip, he offered my dad some money. When my dad refused the money; he offered to fill up his boat with gas. Again my dad refused, but mentioned to him to return the favor if he ever saw us stranded. He agreed as we said our good-byes and parted.

A year later my lower unit gives out. My dads immediately started looking for a used one, and guess who had one? None other than Benny Vasquez, the same person that we towed in. When he found out that I needed the lower unit, he was gracious to give us a heck of a deal on the much needed part along with many extras. My dad took care of the logistics, and I was up and running in no time.

Being that our last trip was cut short because of the lower unit giving out; I invited the same friends that were with me when we broke down. The only ones who could make it were my girlfriend Melissa and best friend Mark Clive. From the minute we got there Mark started smack talking, saying how he was going to catch the most fish. Melissa and I just looked at each other and smiled. This was Melissa's third trip out, and it's been pretty cool seeing her improve every time out and equally rewarding to see her get excited when a fish slams her topwater.

As for my friend Mark, he continued his smack talking only to be quieted down when Melissa caught a good size redfish. Melissa let out a burst of laughter that made Mark even quieter. As the evening was setting in, it was time to go; Mark was still fishless. He commented, "Last cast."

On that cast he hooked on to a big redfish. As he fought the fish, we kept asking him, "Do you need the net?" He never answered. We let him handle it all by himself, but not before Melissa said "I'm going to laugh if you lose it."

What happened next was so funny; Mark tries to grab the fish by the side of the boat. The fish rolls and becomes unhooked, slips in the water and gets away. Melissa and I could not stop laughing as Mark put his pole away, sat down ready to leave without saying a word. I could not wait for Monday to come so that I could let all of our friends know that Melissa out-fished Mark. Like the saying goes, "What goes around comes around" as Mark found out.

Not long after that trip we arranged to fish with our new friend Benny. As we fished, he reminisced about the time we pulled him in. We both agreed how ironic we came to fish with each other a year later. We even caught a few fish and enjoyed our new found friendship. As the sun was setting and darkness coming quickly, we headed back after an enjoyable evening of fishing.

What's even more ironic about this story was when we approached the exact same spot where we towed in Benny a year earlier, give or take a few hundred yards, there was another stranded boater and family. We immediately began to laugh about the coincidence as we approached the stranded boaters. We ended helping them out by getting them back to the dock safely.

All three of us wondered, "What was the lesson in all of this?"

The moral of this story is "when you do good deeds, they will always return as good deeds."

For the reason we were able to help out Benny, a year later he was able to help me out. Because of his generosity my boat is up and running to enjoy fishing trips with my family and friends. Remember, when you're out on the water, small favors go a long way. Help a fellow boater because you'll never know when it's going to be you left stranded out in the middle of nowhere.