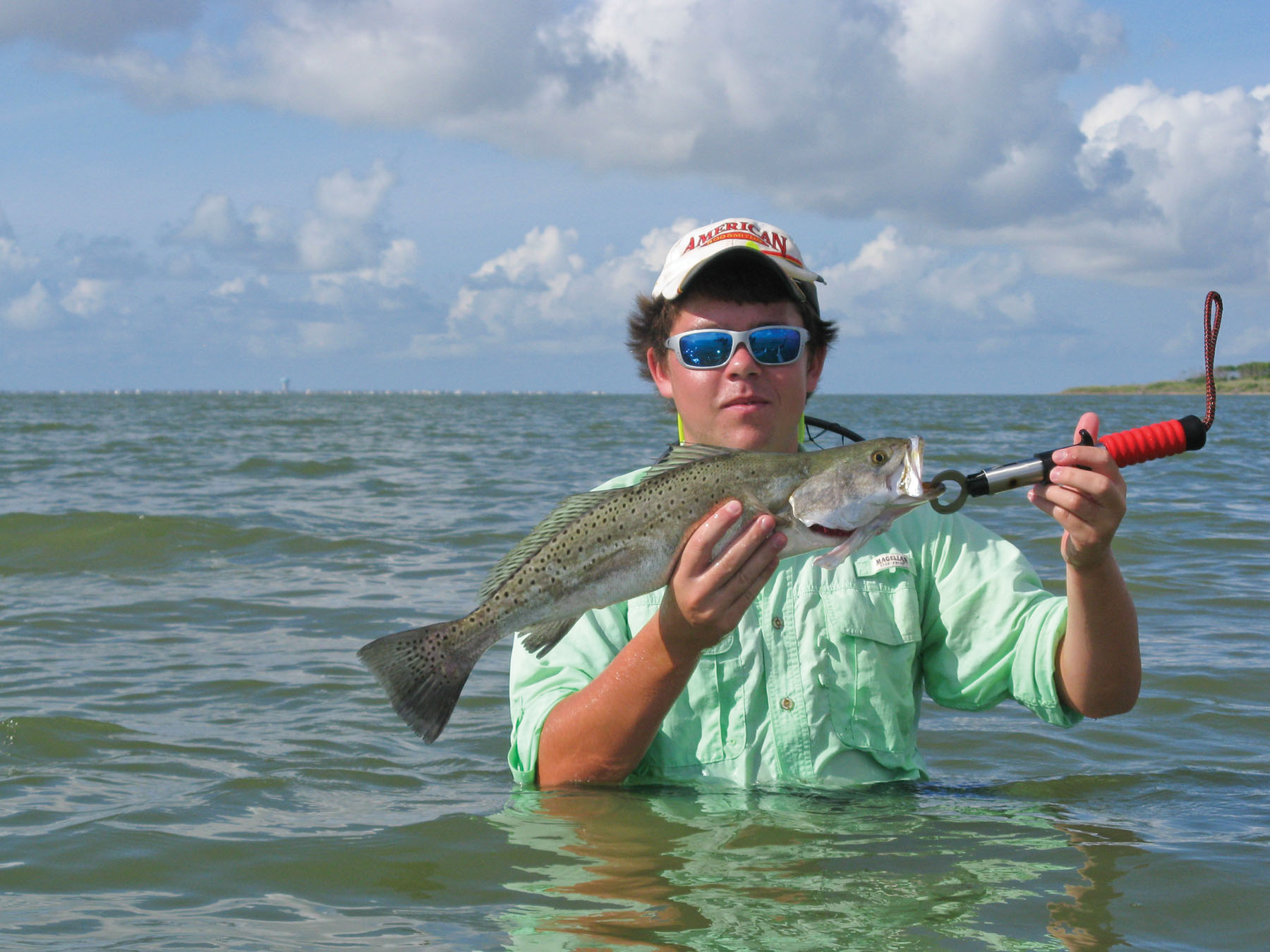 Jake’s friend Cody with a nice speck in the Galveston surf.

If you read my last article, you will remember that my Flats Cat was out of commission getting re-wired. Well the boat is ready to roll, but I haven't yet had the chance to go down to POC to test it out. So the past few weekends I've been staying around the house and exploring the Galveston Bay area a little more than usual. The way the weather has been with triple-digit highs and single-digit winds, I found that surf fishing is a blast. Of course the conditions have to be right, and when they are you can have some unforgettable trips. Surf fishing is a good change of pace from the flats fishing that I usually do. Sometimes while bay fishing you get into large schools of trout, but they may not be large specimens. What I like about the surf is that you can catch a good number of trout as well as trout of size. Also, you can usually catch them on a variety of baits. I like to throw a few different plug baits, but I would have to say the MirrOdine in the regular size and XL seem to be some of the top producers right now. Some people throw nothing but topwaters, but I think the sinking plug tends to catch bigger fish.

The surf however, can be dangerous. Sharks, jellyfish, stingrays, rip tides, and large waves can all be threats while in the surf, but they can all be prevented. Some people might carry shark proof fish buckets and what not, but I just keep it simple with a 20 foot surf stringer made by Fish Slick. As long as I can get distance between me and the fish on my stringer, I'm not really concerned about the sharks. Dealing with jellyfish is simple, just wear long fishing pants. You can get away with wearing shorts in the surf if they're not prevalent although I do not recommend banking your day on them not being there. I learned my lesson, and I always wear long pants now. As far as rip tides and waves are concerned, check the reports. Websites for this type of thing are all over the internet, and there is bound to be one for the beach that you like to fish. Also check a wave model forecast for planning trips in advance. This shows offshore swell height and most of the time is very accurate. One I like to use is a link from www.surfspecialties.com/surf-report/. Go to the bottom of the page and click on the wave model forecasts link. When in doubt, simply slip on a life vest that fits comfortably and will not interfere with your fishing.

I am actually sort of new to the surf fishing thing. You see, I have never really fished the surf until this summer. However, I have learned that the telltale signs for locating trout in the surf are more or less the same as bay fishing such as; bait, diving birds, and slicks. You need to look at water clarity too. Does the term trout green come to mind? Well, that's what you're looking for. So if you are lucky enough to catch a day with little to no waves, low wind, green water, and can find bait and birds, there is a good chance that you will get on some trout.

The best thing about the surf is that you don't need a boat. In the Galveston area there are many free access beach roads. This allows for great fishing for everyone. Just like I mentioned earlier the conditions have to be right. So if the wind is blowing twenty out of the south with four foot swells, I would make arrangements to fish elsewhere. Typically, this is summertime type of fishing. So by the time you're reading this, surf fishing will probably be coming to an end until next summer. It's not all bad news though. With the seasons soon changing, hopefully we will get some rain to stabilize the salinity levels of the bay. Fish should also become more concentrated with the cooling water temps, which makes for easier fishing. Before the temperatures cool too much, get out there and hang ten or five if you're feeling conservative!