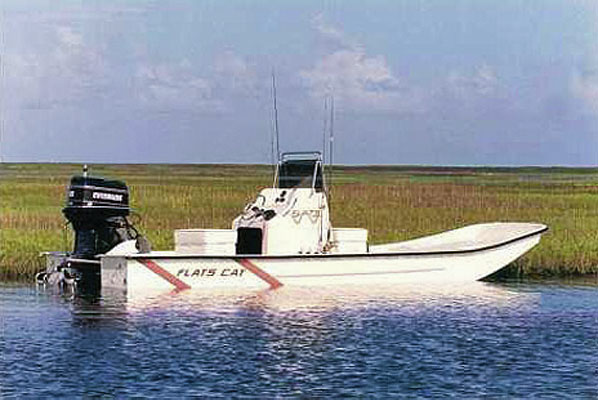 The Flats®Cat is basically a catamaran hull that runs exceptional shallow without churning bottom yet provides a smooth and dry ride in bay chop. (photo courtesy Flats®Cat Boat Co.)
One of the things about fishing the flats of the mid-Texas coast is that you better either have a shallow running boat or a high endurance for wade fishing. Since there are so many islands and small areas of scattered land mass, there is a lot of shallow water that is only accessible with a flats boat. I'm not saying that if you have a deep drafting boat you can't get into some good fishing. That is the farthest thing from the truth. However, for the type of fishing I like to do it is necessary from time to time to cross a mere few inches of water.

About five years ago when my family and I decided Port O'Connor was where we wanted to spend the majority of our fishing time, we sold our v-hull bay fishing boat. Then after a lot of research and price shopping we purchased an 18'5" Flats Cat. The boat was everything we were looking for. It is dry riding, would get up and run in shallow water, and takes open water surprisingly well. This boat was perfect for fishing the middle coast. After we began fishing with the boat in Port O' Connor, we were able to discover a lot of fishing grounds that we were never able to get to before. That was when I found my favorite way to fish; up in the shallow flats.

There are a couple of reasons why a Flats Cat performs so well. One is the oversized full length tunnel that allows a ton of water flow to the motor. This is crucial for running and getting up in shallow water. Next, is that the pontoons of the hull are flat. There's not a v-point sticking in the water, which allows more of a truly level weight displacement.

The reason why the oversized tunnel helps you get up in the shallow flats is because it funnels a lot of water to the prop. The way we do a shallow water take off is to do what my family and I call, loading the tunnel. First, everyone in the boat, except the driver, gets on the "pivot point," or where the bend of the bow starts to straighten out. This is usually right about where your cooler is, in front of the console. Then, put the motor partially up on the jack-plate and mostly trimmed in. Start forward into the wind, and make sure everyone is holding on. Turn the wheel to the left to make a half circle or until you feel the tunnel fill up with water then, increase your RPMs and you should start to come on a plane, and everyone can return to their normal seating. You always go in a counterclockwise circle because your prop is turning in the opposite direction. Thus, you are using the thrust of the prop to your advantage. The skill of getting a boat up in shallow water is not as easy as it sounds. Anyone can get one of these boats up in three feet of water, but if you've been around the marsh a time or two and know what you're doing, you can get a Flats Cat up in one foot of water without chewing up the bottom or damaging your prop.

Once you get the boat up and get on a plane, you can jack the motor most of the way up and trim it halfway out. Then you have the ability to run in four inches of water, or less momentarily if need be. I remember one particular trip when I was with my uncle Mitchell in his gray Flats Cat. We were attempting to run in a back lake. The tide was out and we came around a corner that was a dead end. We were only in about five or six inches of water so we didn't have a lot of motor in the water and couldn't do a full turn around. The only other exit was a few inches deep with a mud bar nearly exposed and covered by only an inch or two. He said, "Hold on," and I did. We gained speed and trimmed the motor out some more. I thought we were about to get stuck big time, but we didn't. We cleared the mud bar and got slightly airborne for a second. The prop even came out of the water momentarily spraying a mist of water. Once the prop regained its grip in the water, it didn't skip a beat and we continued on through the back lake. After that we were able to get out of the back lake and back to the bay front. This was by far the coolest boat ride I've ever experienced.

A Flats Cat is by no means a "go fast" boat, or a technical polling skiff. It is a lean mean redfish machine. It will take you into the back corners of the marsh, but also keep you dry as you cross the open swells of the bay. If you ever get a chance take a ride on one, if you haven't already, I think you will be impressed.