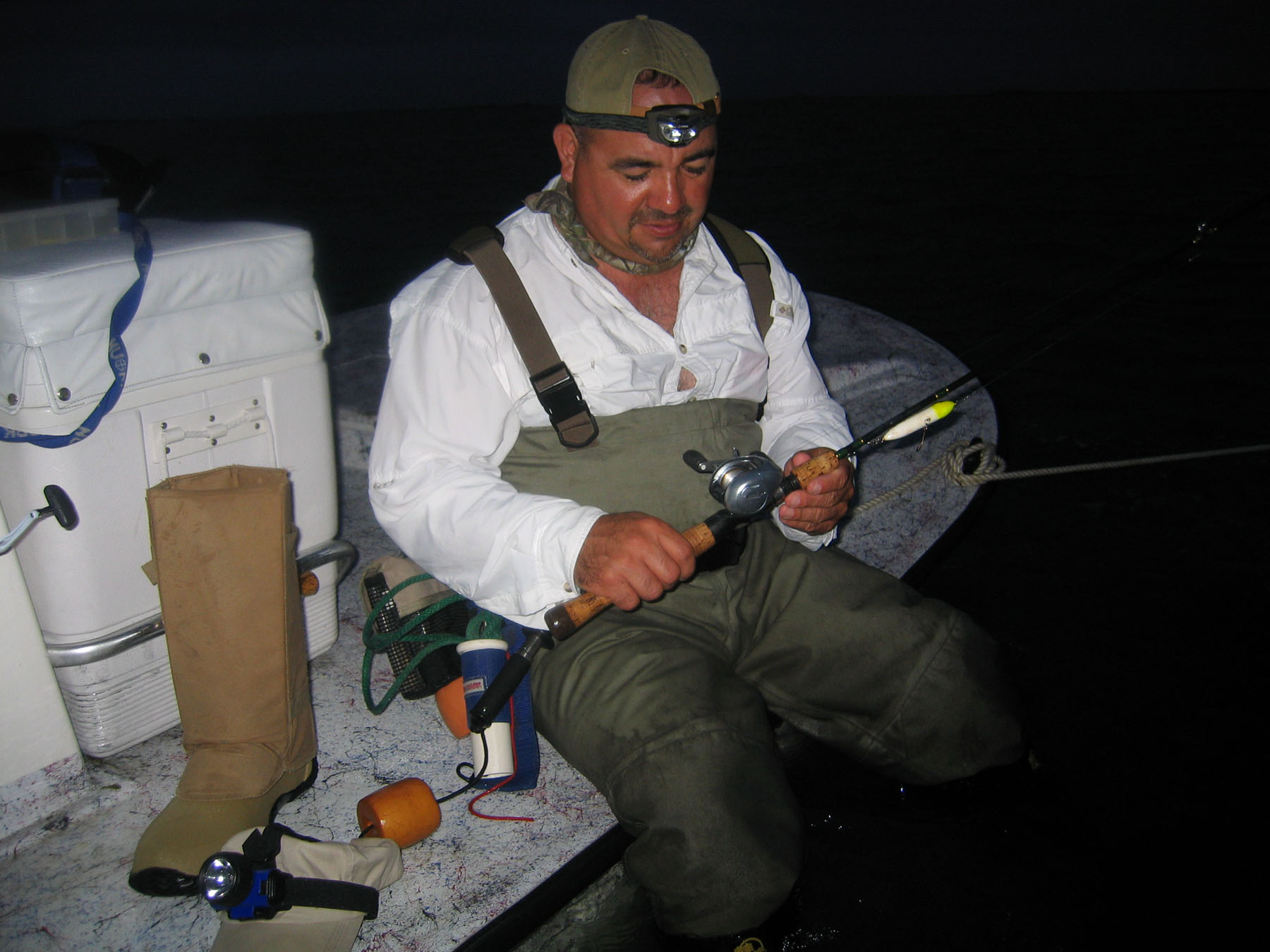 Tools of a night time wade.

I remember my mom and dad recounting some of the things they did while they were in high school. Back in the late 70's and early 80's the "in thing" to do was to attend the midnight shows at the local theater. My dad shared with me stories of his 1966 Ford Mustang and how he used it to cruise the streets of the town on a Saturday night and wait for the midnight show to start. When 12:00 a.m. rolled around many of the high school kids would head down to the theater to watch the show. It all sounds like a fun thing to do, but first of all my parents would not let me stay out that late, and second movies are not high on my list.

Now here we are in 2007, I also have the desire just like my parents to attend a midnight show. Although I have no '66 Mustang, I do own a 50Mg and a Laguna rod along with a wading belt, stringer, headlamp, and a pair of stingray boots. My idea of a midnight show is quite different than that of my parents. My midnight show is getting out on the water and wading under a full moon. Being in the front row of a good midnight topwater bite is my plan of having fun.

Just recently we planned a night wade fishing trip to some of our favorite big trout holes. Joining us on the night trip was a couple of friends who were as excited as we were. Everyone onboard came prepared with a pair of stingray protectors, a bright head lamp, plenty of topwaters and plastics in all sorts of colors and designs.

We left the dock by late afternoon to have sufficient time to fish a couple of spots during the last daylight hours. On one of those stops we caught some nice-sized reds and a few keeper trout. However, the real fun started as the sun sneaked behind the horizon. Darkness set in all around us, and the anticipation of the unexpected finally arrived. Everyone adorned their head lamps, made sure the stingray boots were strapped on tight, and grabbed their gear ready to view the feature midnight show. Yet, before jumping out of the boat in thigh deep water, we discussed a game plan and made sure to mention precautionary safety measures we needed to take. As we slipped into the water we all took our positions, spreading about twenty-five yards apart. Some of us tied on topwaters, and some stuck to plastics.

The start of the night was cloudy, but as the night grew older the moon began to shine in between the sparse clouds. It seemed the bait didn't know that night had fallen; they were as active as in the day. Plastic imitation baits drew the first couple of fish, but soon after topwaters began to do their stuff in attracting fish out of the moonlit waters. As I shone my light on the water's surface, I could see schools of mullet milling around me. I guess I was their refuge from the big trout we were after.

The water would light up with luminescent creatures of the dark which was pretty cool to watch. As we waded further and further from the boat, the lantern that was set on the boat's console was getting smaller and smaller. From a distance I could hear tackle boxes being pried open, trying to find the magic lure that could perhaps draw that trophy trout out from the dark.

We all managed to catch fish, but on this night the only big stars that showed up for the show were the ones in the sky. The stars we were hoping for were the ones with multi-spotted outfits, but they were no shows on this night. That was okay because being out on the water and experiencing something different and exciting as a midnight wade was fun in itself.

Wading during the night takes team work. For example, when someone would hook up with a fish, the fisherman next to that angler would shine his light in their direction until the fish was either released or strung. We do tend to play out the fish more so at night because the risk of getting a hook imbedded in your flesh runs higher in the dark. Despite all the risk that comes with night wading, I still look forward to it. The tranquility that a night on the water brings is unmatched when you compare it to fishing during the day. The serene sound of nature without the resonance of outboard motors and the expectancy of a big fish at the end of my line draws my attention to the king of the midnight shows. That show takes place on the shallow flats of the Lower Laguna Madre. If you attend the show, don't expect the popcorn machines to pop, instead hope the trout are popping. There are plenty of front row seats on the Laguna Madre, and the showing can sometimes be great. Standing room (wading) only is not required; fishing off the boat or from a pier at night can be as rewarding.

I can say fishing at night is not for everyone, but at sometime or another most fishermen have experienced the excitement of the unexpected that night time brings whether it was from a pier, a beach, a flat or a boat. One thing is for sure; night time fishing requires that safety is always at hand. Never fish alone, but always partner off with someone that is experienced.

I will most likely never own a '66 Mustang nor wait for the midnight show to start on a Saturday night at the local cinema. But, one day I wish to own my own boat and cruise the waters of the Laguna Madre and wait for the real Midnight Show to start.