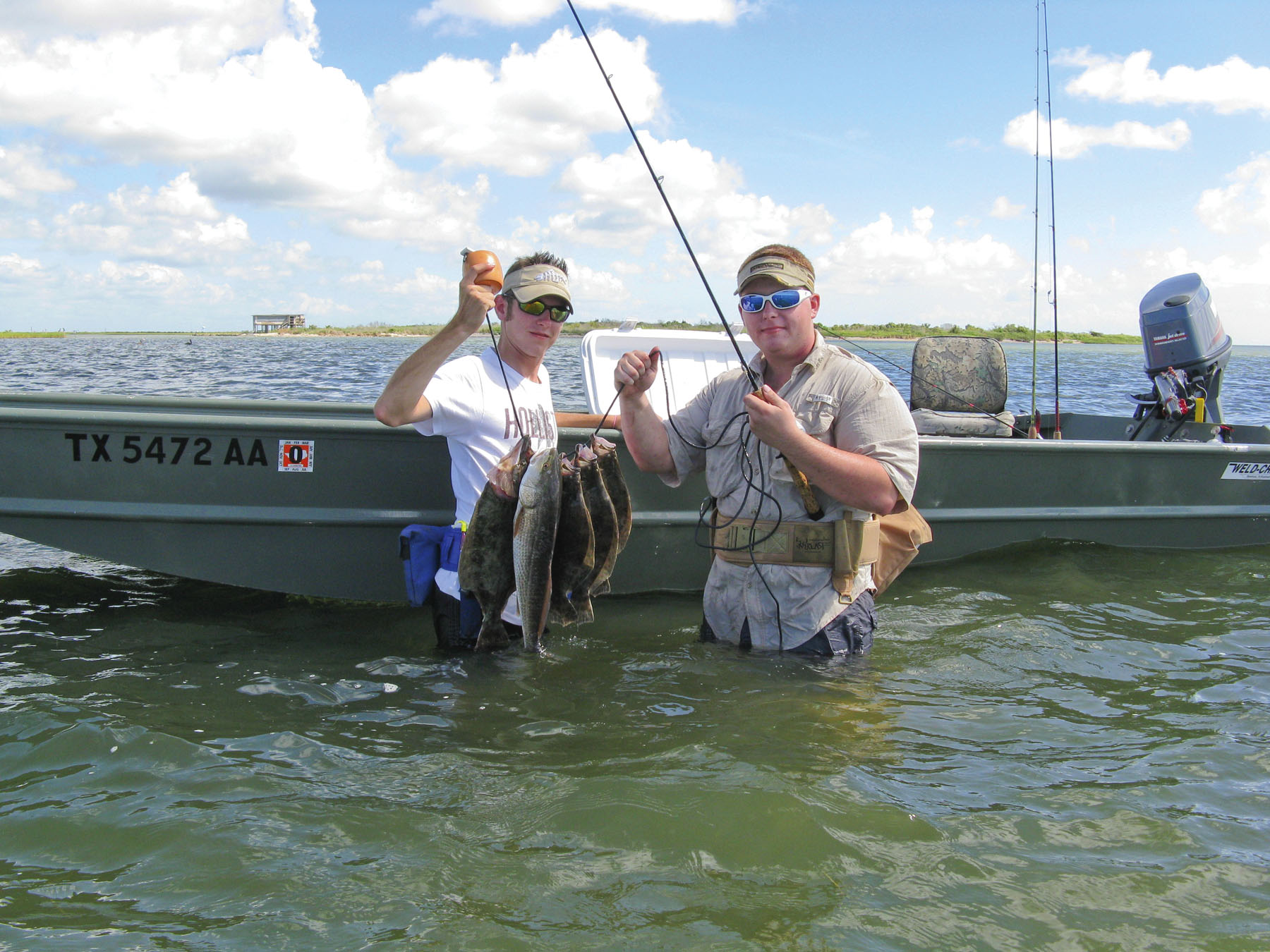 Recently my dad bought me a Jon boat. It's not a fancy boat, and in all honesty, it's not even meant to be a fishing boat, but it does come through when it needs to. The best part is the jet-drive motor, which I have been nothing but impressed with. The motor is a 50 horsepower Yamaha with tiller steering. As for the boat, it's a 16 foot Weldcraft square-nosed flat bottom. A Jon boat is not always thought of as a shallow runner, but when you get the right width with a jet-drive, it will surprise you. The jet will run in next to nothing and slide across mud. The only two down sides to the motor are that it's slower than a prop-drive and it will suck up loose aquatic grasses, which isn't that big of problem and can be fixed easily.

This "duck" boat, as it was originally thought of, does a great job for short trips to the West Galveston Bay complex. Right before school started I had the opportunity to take it out with two of my friends, Garret and Cade. Four-thirty came early that morning and we headed south. It wasn't long before we were at the boat ramp and launching the mighty jet. Running down the channel that morning we hit the edge of a rain shower, but after that it was smooth sailing to the bay front. We arrived to the fishing grounds right at sunrise.

The stage was set with a grassy shoreline and a slick popping in the distance. After anchoring the boat, we got out and started slinging our topwaters. Garret was the first with a blow-up, but the trout missed twice. I had the second blow up and made a follow-up cast to catch a rat red. After a few more blow-ups and catching another undersized redfish, we decided to go to the flounder hole.

The flounder hole is nothing more than a deep gut or drain in-between two flats. The flounder are always there, it's just a matter of if they're willing to eat. When we got there the tide was moving strong, which is a crucial part of flounder fishing. After an unsuccessful hour went by, Cade finally hooked into one of the slimy flatfish. I was next shortly after and then Garret followed-up with a pretty chunky flounder. I boxed one more then the bite seemed to stop. We then tried a couple of the back pockets of the surrounding flat. Garret got hooked up with a decent red, but he pulled loose and couldn't get the job done. We fished the rest of the shoreline but it just wasn't happening. We packed up and made a run back to the shoreline we fished that morning.

With the sun up the visibility was good, so I buzzed down a piece of the shoreline after I made sure there were no fishermen or boats there. The water was clear over the grass which gave me the hunch that the fish were in the stained water of the outer ledge where the slick popped this morning. After not seeing a single redfish on the shoreline I drove the boat to the ledge in the stained water and began drifting. Garret was the first to hook up. With a little team effort, I netted his 23 inch redfish, which was a perfect addition to the cooler. Cade was the next to get a hit but his fish was undersize. Then I followed with a similar sized fish. I guess Cade and I weren't as lucky as Garret. We continued fishing but couldn't seem to trick any more reds into biting a piece of plastic, so we packed up and headed for the boat ramp.

I am looking forward to taking "the jet" duck hunting this winter, but until then, I'll continue to use it for short trips to West Bay. These ventures work out great when I don't have the time to get down to the middle coast, therefore, my new boat has saved many weekends that otherwise would have been fishless. So, even if you can't go to your favorite fishing grounds, settle for the second best and just go fishing.