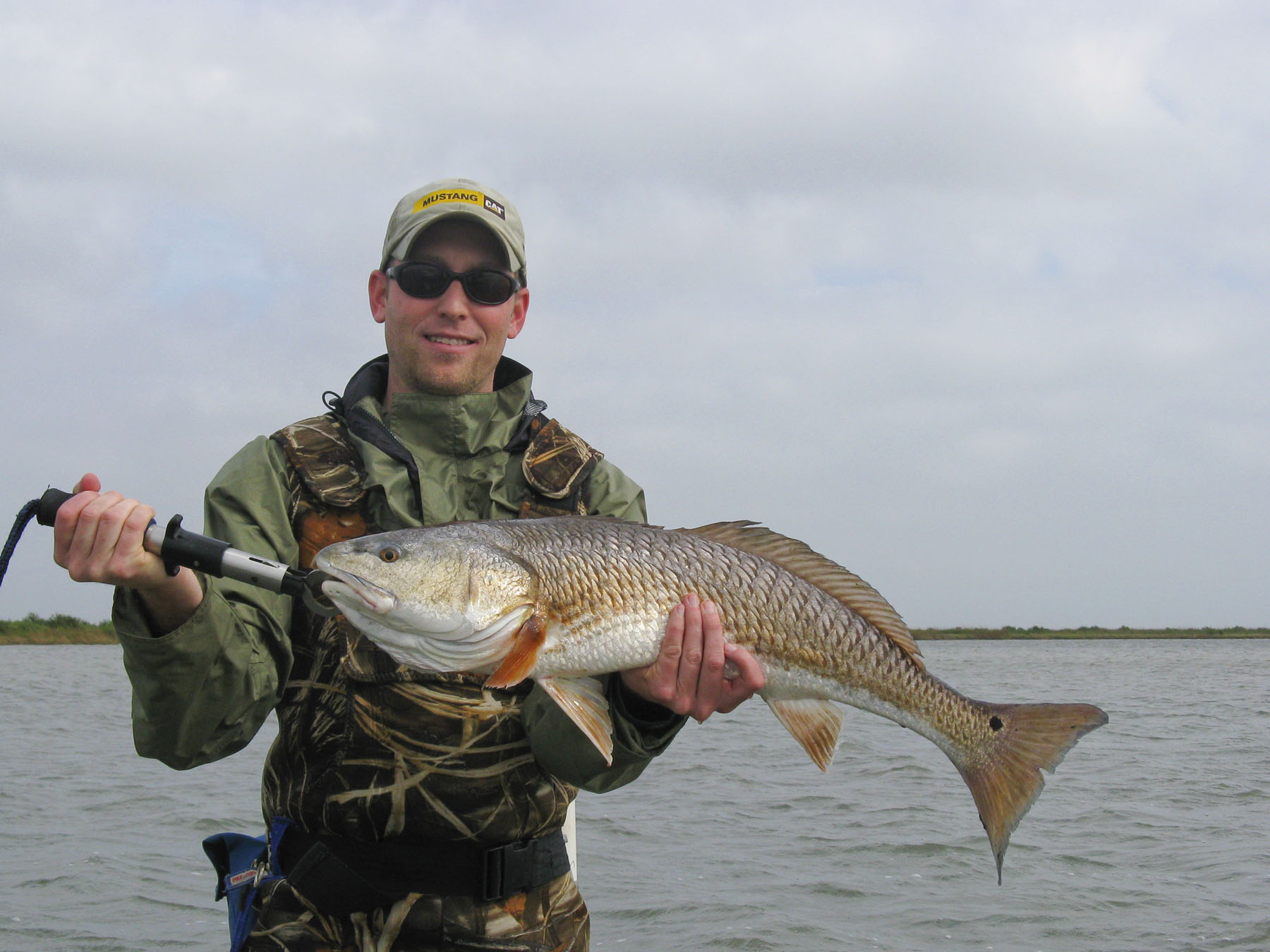 In February, with duck season over, I tend to refocus my efforts on fishing. February can be one of the coldest months, but it also has good warming trends. Fish will fluctuate with the temperate as far as what water depth they will concentrate in. When you are fishing in a warming trend, in-between fronts when temperatures gradually rise, the fish will sometimes be in shallower water than you may expect. This is especially true for redfish, but don't be surprised when you see that trophy trout right up there with the reds. Another thing about this time of year is that with all the fluctuating temperatures and weather patterns, you may have a lot of clouded, foggy days. Some days may be really windy out of the south with lots of clouds, which are caused by an approaching front. These conditions can usually mean good fishing because of the low barometric pressure.

Recently, I was able to take a trip down to Port O' Connor. You can guess what the weather might have been like. There was a cold front coming in, so we had lots of clouds, a stiff south wind, and the temperature was in the high seventies. I was with my older brother, Chad, and one of his longtime friends, Joe. With a decent game plan put together, we headed for the boat ramp. I had high hopes of catching some trout in a particular spot, but when we arrived there, we could see a boat parked right on it with a group of wade fishermen. Of course I was a little bit disappointed, but they had just as much right to the spot as I did so we pulled off and went to another area. We all got out and fished hard at the next spot, but caught zero. Upon entering the next fishing hole, I saw a redfish dart away from us as we shut the boat down. It was a somewhat shallow back lake and there seemed to be activity in it, so we got out and waded towards the windblown shoreline. It didn't take long to figure out that the fish wanted a dark colored shad tail. Chad was the first to hook up with a good redfish. Joe was the next to catch a good red, however, I couldn't even catch a cold. Since we were getting farther and farther from the boat, I decided to go get it to move it down to intersect them later in their wade. In the time I did this they had both caught another redfish a piece. I got out and started casting to catch just something. Instead, I got to watch my brother catch a huge redfish. Right after that, I actually hooked up with a fish of moderate size and almost had him in but he got off. At this point, I was just mad at fish in general.

We continued throughout the day fishing hard and making long wades. I finally caught a few undersized fish but nothing to satisfy my craving. By the end of the day I had nothing to show for all of my hard work, while Chad and Joe had limits of solid redfish. I was trying to think of what I did different that day. All I could think of is that I wore a white fishing shirt. I usually wear a blue one. So, I came to the conclusion that it was bad luck; I was being a bit superstitious, maybe.

The next day we only had about a half of a day to fish and I finally had a chance to redeem myself. The weather was typical heavy clouds and dense fog and the front that was on its way was stalled out over the top of us. On the first wade, Joe managed to catch a red. Now I was trying extra hard. Upon arrival at the next spot, I got out and caught one red right off the bat. "Ah finally," I whispered to myself. Then, I caught a huge, twenty- eight inch redfish. I felt relieved and so much better about myself. We went to a few more spots that didn't produce, but on the last wade of the day, I finished out with a red that I sight-casted to ten feet away from me. I ended my day in high spirits with fish in my cooler, while my brother caught nothing. He was wearing a white fishing shirt; just something to think about.