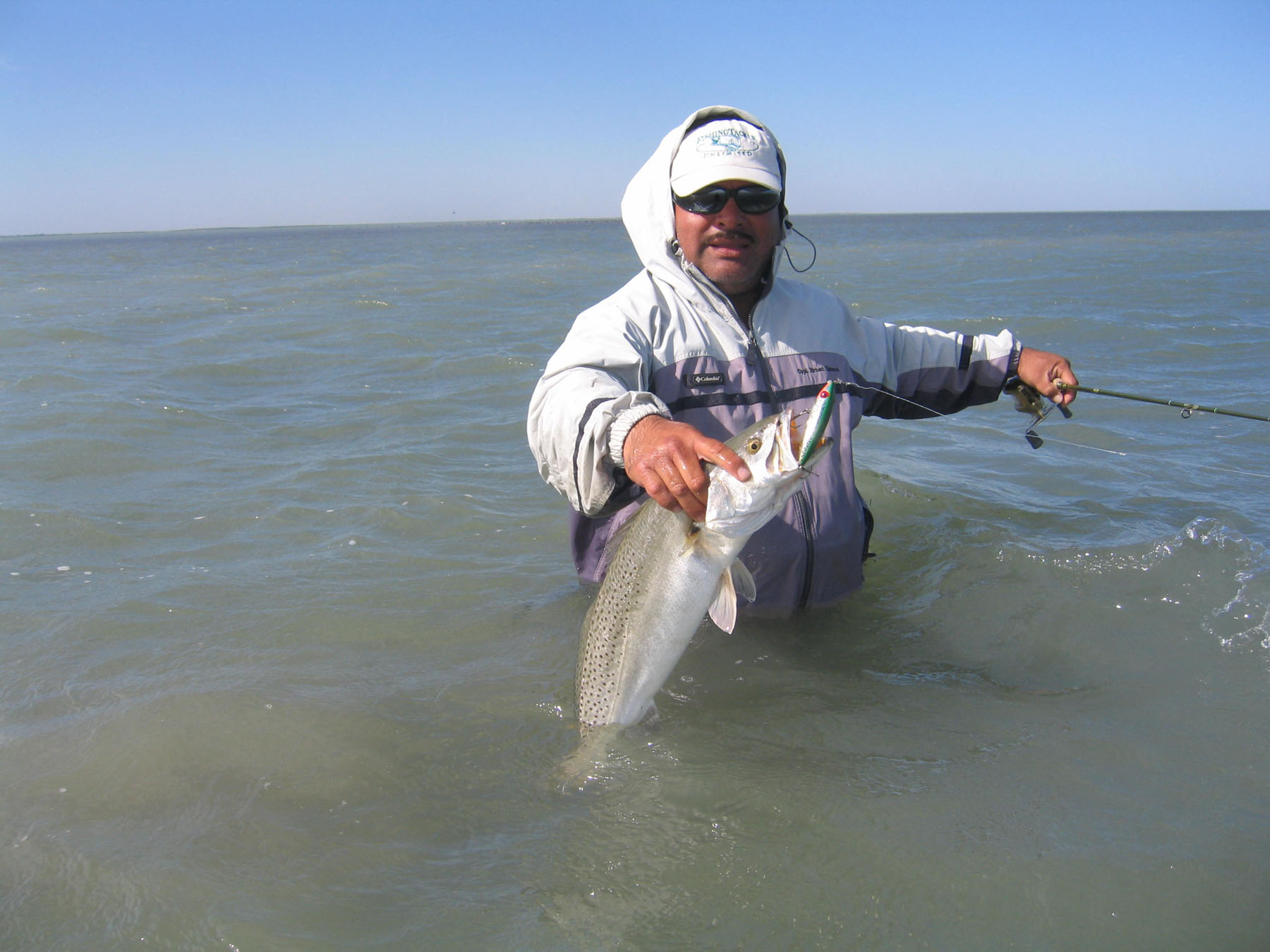 This trout could not resist a noisy She-Dog.
This winter weather has me excited about the outdoors. The trophy trout season is in, and deer hunting is on my mind. I really look forward to this time of year because your chances of catching a trophy trout increase as the water temperatures begin to fall. This past Christmas vacation was no exception, I got to hunt and fish a lot. But there is one fishing trip that truly stands out in my mind, the trip with my dad and uncle. As a matter of fact, I could start a series of these fishing trips and call them "The Adventures of the Three Stooges Larry, Curly, and Moe." This past summer I wrote about the surf fishing adventure with my dad and Uncle Freddy. That trip was a blast with nonstop laughing, and this winter fishing trip turned out just the same.

First of all, in the summer story, you will remember that my uncle overslept, and that's not a good thing when fishing with my dad. Anyway, this time around my dad took some precautions so that my uncle would not be late. It's not very often that we get to fish with Uncle Freddy, but when we do, something funny is bound to happen. As we prepared and took a look at the weather the night before, everything looked good. There was a cold front that was expected to arrive sometime by mid-day. So getting in a morning wade and chasing big trout looked very promising. Because of the expected front, we packed light on the food knowing that our trip would end before noon; at least that was the plan.

We arrived at the spot where some good fish had been holding, and we were not disappointed as the fish cooperated not long into our wade. The first of many funny incidents occurred when my dad accidentally dropped his pliers into the water. By this time I am catching fish almost every other cast, but my dad and uncle are arguing about who is going to dip their arm in the water and possibly draw cold water into their waders. As I'm reeling in fish, I can't help but to laugh about the whole situation. Hearing their convincing stories as to whom and why they should fetch the pliers was funny. To make the story short, the pliers were left behind. About an hour and a half into our fishing the expected cold front arrived three hours early. Noticing that the front was upon us, my Uncle Freddy was unanimously elected to fetch the boat, especially since his reel wasn't working properly. As he picked me up and we idled up towards my dad, he narrowly ran over him for the first of two times that day.

Being that the north wind had arrived but wasn't all that bad, we decided to continue fishing, and I am sure glad we stayed because of what was soon to come. We continued throwing topwaters and walked into an awesome big trout bite as the front moved through. I was the first to land a hefty twenty-seven plus inch trout, and then my uncle landed a respectable twenty-four inch trout, and then it was my dad's turn with a nice twenty-seven. My dad hooked on to another big one that fought for a few minutes and then busted him off. Not long after that I managed to bring a trout within my grasp that would have made my first one look small, but she found a way to jump off. We were in the middle of the best big trout bite I had ever experienced. As my dad was tying a new leader and he asked me if I could lend him a topwater that I had in my box. He instructed me to tie it on and cast it at Uncle Fred, who would put it on his line and then relay it to my dad. I obeyed my instructions and tossed the topwater in the direction of my uncle. He panicked thinking I was going to hook him. When that lure came hurtling towards him, he looked like a catfish out of water. He wallowed around in the mud in every direction almost taking water in his waders. My dad and I could not stop laughing at his actions.

My uncle was traumatized, but this would not be the end. Not five minutes later after that incident I observed three porpoises swimming near the ICW. I mentioned what I had seen, and again my uncle went into a panic mode. He even scooted into shallower water and commented, "With my luck they are sharks, and the one to get bitten will be me." By now my stomach was hurting from so much laughter. While my Uncle Freddy waded the shallow water, he hooked on to a good fish, and while he was fighting it, something hit him in the shin area. He let out a yell of fear and his face turned pale, but he did land the fish. What happened next I don't understand, yet I don't blame him? Here we were in the middle of an awesome trout bite, and my uncle decides he is going back to the boat.

After walking back to the boat, my uncle decides to idle near my dad, and for the second time he almost runs him over. I could see them chatting, but they were too far from me to hear what they were saying. As I continued to walk and cast, out of nowhere a big splash occurred near my topwater, and my line began to tighten up. I set the hook on something heavy and being that minutes earlier I had just lost what could have been my personal best trout. I got nervous. I waved at them both to come help me, and they quickly responded by driving the boat near me. Now what happened next is why I decided to share this experience with you. As they got closer I yelled, "get the net."

At the same time my dad is yelling at my uncle, "throw the anchor." The big trout is splashing every which way. The shouts kept getting louder and louder, "Get the net." --- "Throw the anchor."

You should have seen the dumbfounded look that my uncle had on his face; he wasn't sure what do first with all the yelling going on. At this point my dad jumps into the water, and simultaneously my uncle throws the anchor overboard. The anchor rope catches my dad's ankle, causing him to plunge into the water with waders and all. My dad comes up from under the water and starts yelling, "You got me, you got me."

By this time I am dying of laughter, and the thought of the big trout getting away was of no concern to me. After that entire circus I did manage to land my fourth big trout of the day. Afterwards, we could not stop laughing about the incident, including my dad, wet and all.

As things quieted down, my uncle had the last words, "Hey, when the cold front arrives, can we leave?" Another round of laughter burst out, but this time it was at my father's expense. Maybe that's why on the way back to the dock he tried very hard to get us wet with the water that was splashing over the bow. We did end the day by catching and releasing twenty-five trout, six of which were between five and eight and a half pounds. Not a bad day despite all the mishaps. I can hardly wait for our next gathering, but next time I am bringing the video camera.