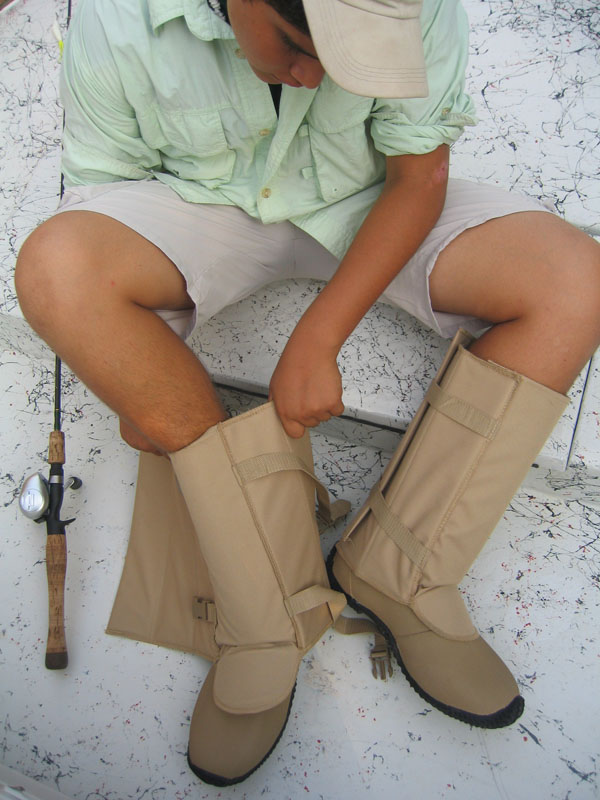 Preparing for a wade.

After reading Capt. Everett Johnson's editorial for the month of August about protecting yourself from bottom dwelling, pain delivering stingrays, I never though I would soon be a victim of their tail slashing barb or much less be inflicted with one of the most excruciating pains I have ever experienced in any part of my body.

We arrived from our summer vacation in early August, and my dad and I went out scouting for an upcoming tournament that my father usually guides me in. I was really looking forward for these two days of fishing. As the first day came, my stomach was full of butterflies as I put on my wading booties and strapped on the wading belt before departing the dock in the dark.

My first wade produced nothing but small trout and undersized reds. The rest of the group was pretty successful in catching, but certainly nothing that they thought would help. Our second wade was in an area where we had found a large number of big reds cruising a shoreline that had an adjacent gut. The water was clear, and it was at this point that my senses became alert as I spotted several big stingrays hugging the sandy bottom. I cautiously waded while working my topwater nonstop waiting for that big strike to occur. All of sudden, a huge wake appeared out of nowhere, and my bait disappeared bending my Laguna rod to its extreme. As much line as the fish peeled out, I knew this was the fish I was looking for. Sure enough it was a bruiser redfish. I then knew that my efforts would turn to finding a trout that would compliment my redfish.

I was dropped off in a spot that would forever change my way of thinking about the dangers that lurk on the bottom of our bays. This spot was along the ICW where I have previously done well on trout and flounder. All I needed was a decent trout and any keeper flounder would certainly help my chances in fairing well on the first day. Ten minutes into my wade I lost a flounder that I desperately needed, I continued casting thinking this is it; this is the cast. About fifteen minutes later, a nice trout hit my Texas Trout Killer and came into the grasp of my hands. It was no trophy; nevertheless, it was one I would welcome on a tough day as I was experiencing. My confidence level quickly arose and now all I had to do was land an elusive doormat flounder. Jigging my worm on the bottom as I walked slowly through the lumps and depressions along the ICW, the last thing on my mind was getting stung by a stingray. My mind was preoccupied with casting at the right spot where an ambushing flounder might be laying.

After dropping off the other fishermen in other fishing areas my dad approached me and anchored about seventy-five yards ahead of me. I could see that he was getting ready to wade, also. While I was watching him positioning the boat and dropping the anchor, I made a mistake that I would dearly pay for. My left foot slipped into a hole, and immediately I felt a pain rush through my leg that stopped me dead in my tracks. I knew it was not good so I quickly yelled out to my dad. He quickly picked me up into the boat and removed my booties only to see blood gushing out and filling the deck with a red pool. The stingray punctured my left foot right above my ankle. We rapidly picked up the rest of our group as my dad was locating my mother so that she could rush me to the hospital. As my father gunned the throttle across the choppy bay, I could feel the pain going thru my foot. In record time my mother met us at the dock. My dad helped me to the car, and off we were to seek medical treatment.

Adrian and Al certainly made things much easier for us. They said not to worry about the boat; they would take care of whatever needed to be done. An hour and fifteen minutes after I had been stung I was sitting in the doctors' office. They gave me the medical treatment needed and out the door we went. On the way home all I could think about was missing out on the second day of fishing. At my dad's strong request, I was told I had to take it easy and stay home.

Lesson learned, as Mr. Everett said before, I also now encourage you to invest in a pair of RayGuards that will protect you from the dangers that lurk in the bottom of our bays. I was lucky that my foot sustained no tissue damage, or that the barb did not break and stay in my flesh.

This past summer I saw many sting-rays and have continued to see them today, but I am now more prepared and educated firsthand about the dangers and pain that sting-rays can inflict. I will now be more aware of shuffling my feet and making sure to wade with my Foreverlast RayGuard boots at all times. Make an investment in a good pair of ray guards so that you will not experience unbearable pain and risk of possible infection or in extreme case the loss of life like our well-loved animal conservationist and TV personality, Steve Irwin.