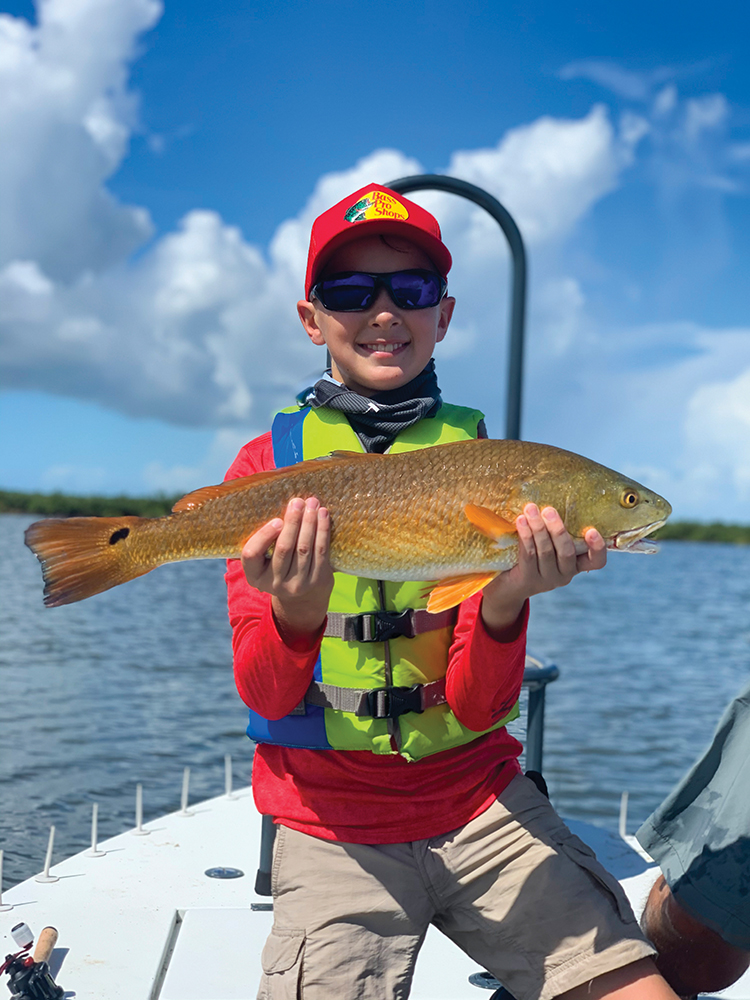 Aiden with a colored-up red!

I’ve written several articles over the years about getting your kids started on saltwater fishing. Tips about starting slow, lowering expectations, chasing non-game species and just generally  letting the kids dictate the trip. All of that still holds true and if that’s the point you are at you can get on the TSFMag website and find one of those older archived stories.

But sometimes you have a kid who is eaten up with fishing. I was that kid. My grandmother would often say, “you’d fish in the toilet if someone told you there was a fish in there.”  Well, maybe. This past week I had a couple of those kids that reminded me of those days. These boys were several steps beyond my skills at their age and it was an absolute blast for me to watch them work.

First up was Will, a thirteen-year-old fly fisherman. His grandfather got with me and set up the trip for Will and his dad. He let me know that Will was a good caster and pretty advanced for his age. He undersold it.

I eased into the shoreline at daybreak and as I’ll often do, picking a spot well short of where I expected to find our first fish. I like to make a quiet approach on the push pole to the intended fishing area and give the angler a chance to warm up with a few casts. When a new customer is on the bow it also gives me a few minutes to get a feel for their casting abilities. That way I know if I need to take chances on spooking the fish because they need a closer target or if I can stay back a ways. We can usually get within chip shot range, but it is nice when I can put less pressure on them.

Will steps up onto the bow and stripped off a good bit more line than I expected, and then proceeded to lay out a nice clean loop. I had told him the fish would most likely be within a couple feet of the bank along this stretch. His warm-up cast landed inches from the dry shell.  That’ll work. I knew at that moment we were going to catch some fish.

Throughout the day I was steadily impressed with this young man. He was really good at spotting fish and quick to react to the opportunity. His backhand cast was as good as his standard forehand. That versatility will get you bonus shots when the fish show up on the wrong side and I don’t have time to spin the skiff.  Several times he started his backcast before I had even seen the fish. When I did beat him to the sighting and called out the location he was immediately on it and getting off a quick cast. There wasn’t much coaching needed.

Most of these fish weren’t super aggressive; the cast had to be accurate and you needed to coax them into eating, often requiring multiple casts to seal the deal. I get some guys out there that are technically good casters, however they lack that ability to “feed” the fish. For some folks it just comes naturally while others have to work at it. I think Will was born with it.

Needless to say we caught a good many fish. Honestly, I was having such a good time I didn’t keep track. Oh yeah, dad was no slouch either and he contributed to the boat tally, but this story is all about the kids.

The next two days were spent with young Aiden. I absolutely loved this kid. Pre-trip, his grandfather had informed me they’d bring their own gear, if that would be alright with me. They live a long ways from the coast and mostly fish for bass. No problem, people are often more comfortable using gear that is familiar to them. I always bring along a couple back-up rigs since you never know if theirs will get the job done in the salt.

The first morning Aiden strolled down to the dock toting a handful of baitcasting rigs. I was thinking to myself that I probably made the right call putting a couple spinners in the rod holders.  Baitcasters in the coastal wind can be tough on grown men, much less an eleven-year-old. My worries were without merit. This boy could flat sling it. I’m not talking about the more timid sidearm sling it; he made aggressive overhand casts that fully loaded his rod and resulted in accurate casts wherever I told him to throw.

Oh yeah – zero backlashes - with the wind, into the wind, across the wind, it didn’t matter. I’d have to put him in the top five casters who have occupied my bow this year. I got a kick out of just watching him work. As with Will, Aiden was good at spotting fish on his own. The ones he hadn’t seen yet were quickly spotted with just a little coaching.

At one point we rounded a corner into a small pond and found a nice school of twenty or so reds tailing hard. The school was pretty tight, but a couple fish had separated and were leading the school. As I eased closer I explained they were moving left to right and a cast just beyond and in front of them would be best. Over the years I’ve had many grownups freeze up at this sight and totally blow the opportunity. Not my little ace. His cast was on the money and the hook-up was immediate. He pulled the fish away from the school exactly as I instructed, leaving the main group intact for a follow-up cast by his grandfather. It was a beautiful thing.

This youngster was like a sponge. Lots of good questions about the how’s and why’s of chasing redfish, but also about all the other things we saw. He was constantly peering into the water spotting rays, crabs, and jellyfish; often dropping onto his belly and reaching down to pluck some critter so he could examine it a little better. His enthusiasm was so much fun to watch.

Between Aiden and ol Pop-Pop they put up some impressive numbers. They were neck and neck in their friendly competition and, according to Aiden, they were tied at the end of the day.  At the end of day two I asked him where they stood. He replied that they had caught so many fish he had lost count, but was pretty confident he had won. I don’t know about that, but he had certainly held his own.

As we stepped onto the dock and without any prompting from Pop-Pop, Aiden thrust his hand out and gave me a firm shake while saying what a great time he had. He even apologized for asking so many questions and thanked me for always answering. That part caught me off guard and I told him I was happy to do it. He continued on with, “Well, our last guide told me to shut up and sit down.” Shame on you, whoever you are. Fishing with kids like these two should be cherished and encouraged.

As we parted ways Aiden loudly proclaimed for everyone at the bait camp to hear, “Captain Scott, you’re the best guide ever.” Thank you young man, that means more to me than you’ll ever know.