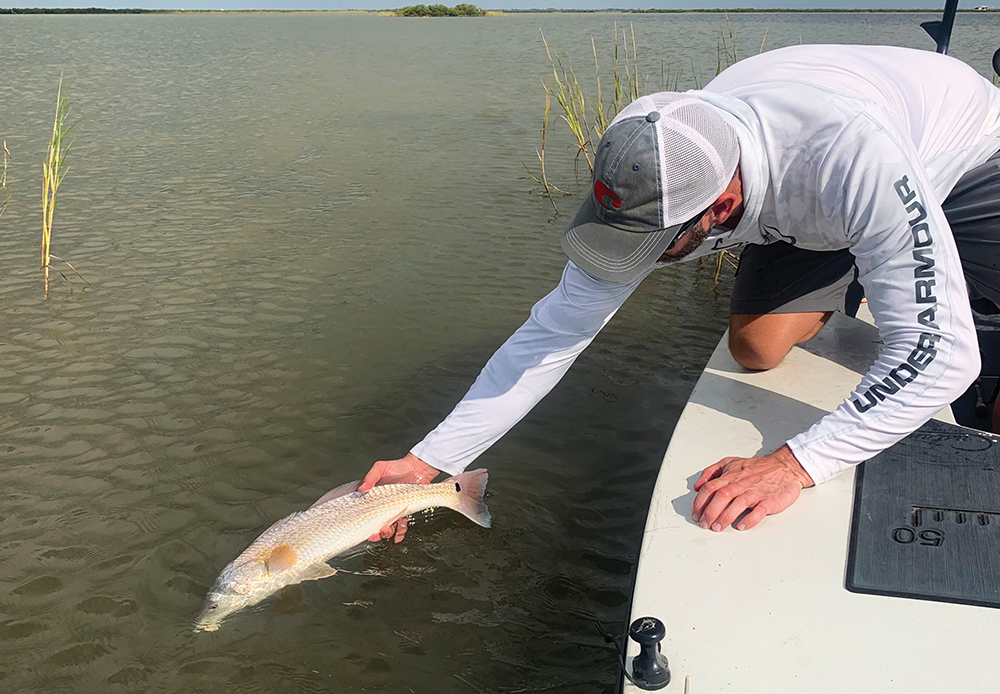 Hold onto them for a minute or two...they'll let you know when they're ready to go!

I have always been a strong advocate for catch and release. My guiding business is built around it. I am not and never intend to be a meat-haul guide who measures success by the size of the fillet pile. I’ve been blessed with steady customers who feel the same way. I don’t force it on them and if they want to keep a few for dinner that is fine. My people come for the sport of fishing and the experiences of just being out on the water.

In the wake of this freeze kill I will be 100% catch and release on trout. Reds do not seem to have been affected as much, but I will continue to encourage catch and release of them as well.  Yes, based on the number of floaters, I know it appears my particular part of the coast was not hit as hard as others. However, in talking with the biologists there are many more fish dead that never float up, for whatever reason.

I’ve heard a whole lot of people saying they’ll catch and keep whatever they want until TPWD tells them otherwise. I’m going the other direction. I’ll continue my program until the results of the analysis are in from TPWD. In my view, what does it hurt to be more conservative for a while and see what develops? Also, know that even if your particular area didn’t get hammered by the freeze, it is about to get hammered by increased boat traffic and pressure by anglers from other areas that did not fare as well.

TPWD will be conducting their gill net population sampling through April, May and early-June. This systematic method of surveying fish populations and the overall health of our bays has many years of data to compare against. The results will be used to map out a recovery from this devastating freeze. I would not be at all surprised to see a reduction in trout limits. Even if it doesn’t apply state wide, I would expect regulatory changes in areas that were hardest hit.

If you are wanting to do your part and get started in the catch and release way of life there are  some things you can do to improve the chances of post-release survival. A lot of it is common sense, but perhaps you’ll see a suggestion you hadn’t thought of.

A common sight every summer is the boat parked on a big school of small trout. They’re catching them fast, flopping them on the hot deck, grabbing them with a towel, unhooking and then tossing them back like a grenade. It defeats the purpose if you kill or injure those fish.  Studies have shown that properly handled and released trout suffer very little mortality.

The slime on fish is there for a reason. It protects them from bacterial infections, among other things. Getting netted, flopping on a hot boat deck and being picked up with a towel or gloved hand are all detrimental to the slime coating. Even grabbing a fish with a dry hand isn’t recommended.

The less you handle the fish the better its chances. When wading or kayaking, keep the fish in the water and control it with a lip gripper while unhooking. If you want a quick photo, pick it up with one hand supporting the belly and keep it horizontal. This is particularly important with large fish. Holding a large fish vertically by the jaw has been shown to cause internal injury as well as damage to the jaw itself. Fish in the water aren’t dealing with gravity and thus aren’t designed for it.

Our typical flats boats have sides low enough that we can do the same thing as waders and kayakers. A landing net is probably the easiest method on boats with higher sides bay boats. They make rubber nets that are much more fish-friendly than those made of braided nylon. As a bonus, hooks don’t get hung up as easily in rubber nets. Anybody who has ever netted a flopping trout caught on a plug with treble hooks knows exactly what I’m talking about.

Speaking of trebles, now is a good time to switch over to the new single replacement hooks.  Several manufacturers are offering these and it is something fairly simple that you can do to reduce injuring your fish. Extra trebles seem to always get hung up somewhere on the fish during the fight and require additional time to dislodge. I know some folks are hesitant to ditch the trebles, but I’ve been using singles for years now and don’t really see any difference in hook-up and landing ratio. Another great thing about single hooks is their ability to glide through grass with far less fouling than trebles. And I know I sure do appreciate it when I go to unhooking a fish. My odds of getting a hook in my hand are far greater when dealing with two trebles versus two singles.

Back to the boat sitting on that huge school of hungry pencil trout. Personally, I just move and go look for some larger fish. But I get it, you’re really in ‘em and you’re catching and releasing anyway. Should you find yourself in this situation, switch over to a soft plastic with one hook.  They’re typically so much easier to remove. I’ll just grab the shank of the hook with my pliers and give them a little flip without ever touching the fish.

If you want to take it a step further you can mash your barbs. This has long been practiced among fly fishermen, but it works fine on conventional tackle too. The barbs on hooks were originally put there to help hold bait in place. With proper consistent pressure you can land most any fish with a barbless hook. Unhooking your catch couldn’t be easier. Plus, if that hook finds its way into your finger or another angler (see also fishing guide) it can be removed without fanfare. There have been many times that I’ve plucked a customer’s fly from the back of their neck and they were grateful for that barbless hook.

Now that we’ve landed the fish and unhooked it without doing harm, we still aren’t done.  Smaller fish that were landed easily don’t require much attention. Just slide them back into the water and they’ll kick off. The larger the fish, the longer the fight. This bigger fish has been stressed and might need to be resuscitated a bit. On big trout and slot reds I’ll hold them horizontal in the water with a lip gripper until they let me know they’re ready. On big bull reds I’ll hold them by the wrist of their tail until they pull away. Once you let them go keep an eye on them for a few minutes. If they flip upside down it’s usually just a matter of pushing them back upright so they can get reoriented. Occasionally a very tired fish will require a bit more hand-holding and once in a while they just aren’t going to make it. Take that one home for dinner.

I’m certainly not going to tell anyone they can’t keep their legal limit, that’s up to the individual to decide. But I would not hesitate to suggest releasing it. This sport brings us so much joy, maybe it’s time to give back for a while. Mother Nature and our trout stocks will rebound, they always have. But the turnaround time would be greatly reduced if we’d all be a little more conservative with our approach to the fishery.


Experts Speak about the 2021 Texas Freeze!