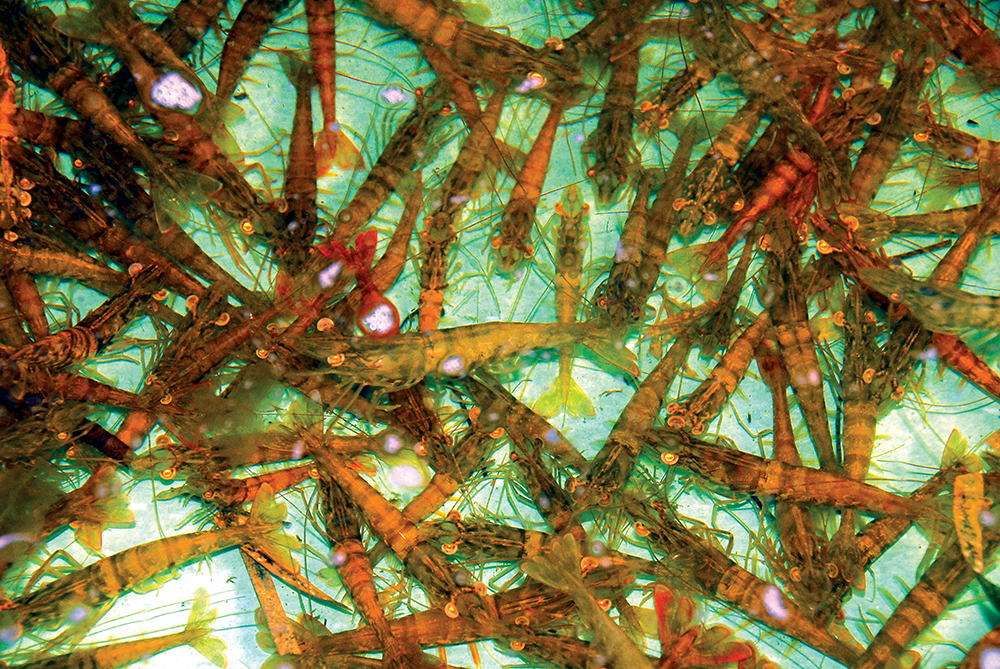 I don’t use live shrimp for bait very often but when I do, I catch my own. Many of today’s anglers may not realize it, but shrimp are everywhere in late summer, unless the water salinity is out of whack and gone fresh. Catch a few dozen shrimp, pin a live “hopper” on a hook, toss it out in Gulf waters and just about anything that swims will grab on. Including quality trout and redfish, sheepshead, flounder, black drum and tripletail.

Getting serious about catching shrimp means buying a castnet and learning to throw decent circles with it. With shrimp, the nice part is that you don’t have to throw the net far. Or watch for fast, passing ripples, like with mullet. Catching shrimp doesn’t require clear water and polarized sunglasses. Shrimp are slow, mostly sitting on the bottom, often right under the boat, seawall or pier much of the time. Though not always: A roadside ditch or one of those rock groins sticking out in the Gulf from the Galveston seawall are exceptions; you would need to toss that net at least 10 feet.

Back in the day, as a fish-hungry 9th grader in Port Arthur, buying live bait wasn’t an option. As a result, castnets were fairly common. After we figured out that our 20-foot minnow seine was just lame at catching finger mullet and shrimp, we switched to castnets. I’d spend hours tossing the net right at my feet, from a small wooden bridge spanning a 12-foot pass that drained the marsh next to Rainbow Bridge Marina. As a result, hundreds of shrimp and finger mullet were carted off to the bait freezer.

A few miles away, the seawall on Pleasure Island on Sabine Lake had a clean bottom and you could scatter Ken-L Ration canned dog food in the water, marking each spot on the seawall with a small rock. Wait a few minutes, and white shrimp were all over that chum. In the autumn, we could fill a 5-gallon bucket with brown shrimp. If salinity levels in today’s chronically fresh Sabine Lake can ever level out with more salt, those shrimp will return.

Nearby on the Intracoastal Waterway (ICW) right in town, in October, we’d take a flashlight and scan the granite rocks at night. If the water was salty and greenish, many of the 5-foot rocks each had about 30 shrimp sitting on top with glowing red eyes. You needed a small castnet for that job, aiming for flat rocks where no mesh overlapped into the cracks. If the net snagged, a handy pole could be used to poke around and lift the net straight out of the water. We assumed those shrimp retreated down into the rocks during daylight, grazing on algae, safe from predators.

Shrimp are also out at the big Gulf jetties, at least off Sabine and Galveston. Within 30 yards of the rocks, they seem safe enough from shrimpboats. Friends of mine anchored only 10 yards out from the Sabine rocks, in water about 15 feet deep, and tried a few throws of their castnet (hoping for a clean bottom), and kept coming up with jumbo shrimp. More and more shrimp followed. Soon, all thoughts of trout fishing were tossed aside, and they kept throwing that net, catching hundreds of jumbos that late summer day. Next day they bought another net and came back for more.

At the same Sabine jetties where we misspent our youth, it was fairly common for fishermen to carry a 20-foot “sport net” onboard, which is a version of the common shrimp trawl, complete with weighted doors, but in miniature. Some of the old-timers out there wouldn’t go without them. They weren’t into tossing spoons all day like we were, but instead preferred catching live shrimp and hammering redfish and trout with a minimum of effort. They’d pin a kicking shrimp under a pop cork, toss it near the rocks, sit back and wait. And often load the box, since there were no limits in those days. With live shrimp they would out-fish us terribly, when the water was chocolate-colored and our artificial baits were useless.

One summer when the water was too murky for our spoons, we made a tentative effort to catch our own shrimp out there with a towed net, and it went badly. First, we towed the net for a half hour but forgot to tie the bag’s end, and came up with nothing. The second tow yielded serious weight at the end and we eagerly pulled hard: It was a ripe moment for singing "Haul Away Joe,” the centuries-old sea chant. To our dismay, up came a hundred-pound ball of writhing, foot-long hardhead catfish. Poison fins protruded from almost every gap in the mesh, and grabbing that net and getting it back in the boat was a trial. We were each stuck a few times, and the catfish laid eggs like grapes, each with a pair of tiny eyeballs, that bounced and rolled back into the drain plug area and behind gas cans. What a mess! But when the going gets tough, the tough go fishing. We gave up on that mess, anchored and strolled off down the jetties, firing gold spoons out into a green tide. On the way home, we pulled the car and boat over and plucked out the last 30 pounds of catfish, tossing them into the ditch just off the road. It was the last time we ever towed a shrimp net, which will catch all manner of sea critters, many of them undesirable and with an attitude.

In late summer, shrimp move right into the Gulf’s shore break. We’d launch in the surf and run out to offshore rigs on the horizon, east of High Island, far from any boat ramps. We had that beach and the rigs all to ourselves, except for a salty old shrimper who also launched there, using a heavy gauge 26-foot aluminum boat. He’d tow his net just beyond the breakers and load up on shrimp and also white squid, among other species. After catching enough, he’d get a running start and run that big boat high and dry right up on the sand, where it was safe from wave action. He’d then back his trailer under the bow and use a powerful 12-volt, battery-powered winch to pull the boat onto the trailer. In those days, when hurricanes were few and far between, a paved Highway 87 ran along that beach and it was easy to drive from Sabine to Galveston. But no longer.

In Galveston, numerous rock groins that stick out into the Gulf along the seawall offer easy access to shrimp. I’ve parked right in front of Gaido’s restaurant, walked out on that line of rocks, and caught plenty of shrimp mixed with quite a few big menhaden. Tossing the net out 8-10 feet, I never hung bottom; it was easy pickings. The shrimp were big enough to eat and the menhaden could be frozen for the next offshore trip, or maybe the September run of bull redfish.

Of course, if you’re in a hurry to hit the water and fish that honey hole at dawn, then scoring a quart or two of live shrimp from a marina makes more sense. I’ve seen them priced $20 a quart in Galveston, $25 a quart in South Florida, all the way down (this year) to 100 count for $5 on Florida’s Gulf Coast Bend, the latter using the honor system at someone’s house on the highway, leaving cash in the coffee can. Quite a rarity, these days.

If your schedule is more relaxed, save money and try catching your own shrimp. Just keep in mind that there are lots of state shrimp regulations these days. They can be read on the Texas Parks and Wildlife online page called Shrimp Regulations and Restrictions. Among other items, I notice they now frown on cast-netting in natural passes, where at times shrimp migrate en masse. But bay seawalls, Gulf beaches and the outside Gulf jetty walls still look like fair game.