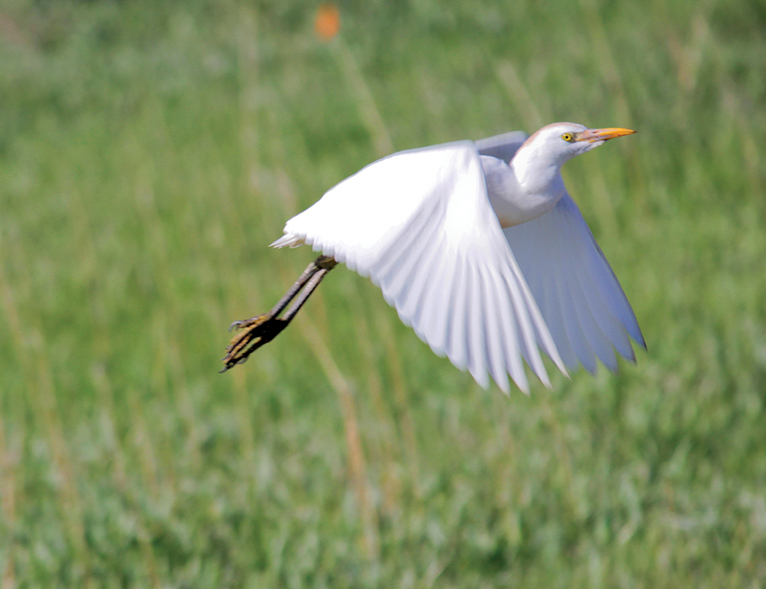 The cattle egret, Bubulcus ibis, is a cosmopolitan species of the heron family found in the tropics, subtropics, and warm temperate zones around the world. Despite the similarities in plumage to the egrets of the genus Egretta, it is more closely related to the genus of herons, Ardea – though it belongs to neither. It has its own genus, and is the sole member (although some authorities regard the two subspecies as full species: the western and eastern varieties).

In the day herons family (Ardeidae), there are over 60 recognized species. These loose-plumaged wading birds have slim bodies; long necks; long, straight, sharp bills; medium to long legs; and a few toe peculiarities. Some are called bitterns or egrets instead of herons. Herons, egrets, and bitterns each have their own genus, but it’s the heron and egret genera, Ardea and Egretta, that seem least clear in their classifications. In general, egrets are white, smaller than herons, and sometimes have decorative plumes. (The word “egret” is derived from the French aigrette, meaning plume feathers.) Herons are generally larger with dark plumage. Good luck classifying a medium-sized bird that can be dark or white!

The cattle egret’s genus name, Bubulcus, is Latin for “herdsman,” referring, like the English name, to their association with cattle. The species name, ibis, is a Latin and Greek word. Greek authors recognized three types of ibis: the glossy ibis, the northern bald ibis or waldrapp, and the sacred ibis. The sacred ibis, T. aethiopicus, was revered by the ancient Egyptians, who considered it to be a representation of Thoth, the moon god, because of its crescent-shaped bill and bright white plumage. In the 1700s, Swedish explorer Fredrik Hasselqvist was persuaded by his Egyptian guide that the cattle egret was, in fact, the sacred ibis of the ancients. Hasselqvist’s papers eventually found their way to Linnaeus, who unwittingly perpetuated the deception in the egret’s scientific name.

Adult cattle egrets reach about twenty inches in length with a wingspan of about thirty-seven inches and can weigh up to a pound. They are rather small and compact and typically stand in a hunched position. Their feathers are usually white, but during the breeding season, orange-buff plumes appear on the head, neck, and back. The bill is yellow and the legs are yellow to gray-green – except during breeding season when the bill, legs, and eyes turn red. Juveniles have dark legs and bills, sometimes even after fledging (for a short time), which can lead to some confusion in identification. Males are slightly larger than females, though not noticeably so at a distance. The oldest cattle egret on record was at least 17 years old when it was captured and released in Pennsylvania in 1979. It had been banded in Maryland in 1962. Few in the wild live longer than 7 or 8 years.

Originally from Africa and Southeast Asia, cattle egrets were first sighted in Surinam (southeastern South America) in 1877. Although the mechanisms and details of this range expansion are not known, it is thought that their introduction to the Americas was a natural and migratory event. In 1916 or 1917, during WW1, R.B. Cunninghame Graham surveyed the cattle industry in Colombia and observed several "white ibises" on the backs of cattle in the lower Rio Magdalena. These birds were probably cattle egrets. From their foothold on the northeast coast, the species moved north across the Caribbean to North America. Willard Dilley of Clewiston, Florida, saw cattle egrets in South Florida in the early 1940s, but didn’t report the sighting, thinking the birds were escaped captives. More unreported sightings occurred in Florida throughout the 1940s, but in the spring of 1952, Richard Borden photographed some “snowy egrets" with cattle at Lake Okeechobee, Florida, that were correctly identified as cattle egrets after the fact. Later that same spring a cattle egret was captured, with some difficulty, on a farm near Wayland, Massachusetts. Thus, on April 23, 1952, a new species was officially added to the list of birds occurring in North America. In the next 50 years, they became one of the most abundant herons of North America, showing up as far north as Alaska and Newfoundland. In 1959, cattle egrets were intentionally introduced into Hawaii as a biological control for flies and other cattle pests. However, they are now considered a major pest on the islands.

Cattle egrets originally arrived Texas in 1954, migrating south and west along the Gulf Coast states from initial heronries in Florida. They increased from about ten pairs in the state in 1959 to about 300,000 pairs by 1990. By 1995 they occupied 266 heronries, usually containing snowy egrets and tricolored herons, along the coast, east of the Balcones Escarpment. Between 1987 and 1995, a few small scattered colonies nested in the South Plains, Trans-Pecos, and Panhandle. From 1959 to 1972 the cattle egret population increased at an average rate of 180 percent a year, and large colonies began to develop. Between 1972 and 1990 the rate of increase dropped to an average of 120 percent per year, possibly indicating that the species was reaching its maximum sustainable population in Texas.

The remarkable range expansion of the cattle egret represents one of the great avian success stories. Their rapid spread stems from versatile feeding and breeding abilities, an aptitude for dispersing to new areas, and rather uniquely, human expansion. As people have converted land for livestock production and crops, cattle egrets have gained foraging habitat. Their original habitat, in Africa, was short grass meadows that periodically flooded. The pastures, marshes, and plowed fields of the US turned out to be great alternatives. National Audubon Society Christmas Bird Counts have recorded wintering cattle egrets in Texas since 1956 – though compared to the large breeding population in Texas, the winter population is extremely small, with most of them in coastline counties, increasing southward. Scattered individuals sometimes spend mild winters farther north on both coasts, up to Washington and Rhode Island. Sightings away from coastal areas are inconsistent and infrequent.

True to its name, the cattle egret often associates with cows and other large grazing animals (or farm machinery), waiting for the cow to scare up its next meal. (Elsewhere in the world, they forage alongside camels, ostriches, rhinos, elephants, hippos, tortoises, etc.) Cattle egrets have broad, adaptable diets. Foraging mostly on insects disturbed by grazing livestock, they also hunt the edges of wetlands and fields that have been disturbed by fire or machinery. They’ll actually fly towards smoke to catch insects fleeing a fire. Grasshoppers, crickets, and livestock-associated flies are the biggest item on their menu. They also prey on owlet moths and their larvae, cicadas, wolf spiders, ticks, earthworms, crayfish, millipedes, centipedes, fish, frogs, mice, and sometimes small birds. Adult cattle egrets are hunted by peregrine falcons, great horned owls, barred owls, raccoons, foxes, and dogs. However, the major cause of death is shooting, most of which occurs when the flocks migrate south out of the US in the fall/winter.

Breeding occurs throughout most of the US and in three Canadian provinces, but it is concentrated in eastern Texas and the Gulf states east to Florida. In Texas, cattle egrets breed throughout the entire coastal and eastern regions, eastern portions of north central and central prairies, and a few scattered sites in the south plains, west Edwards Plateau, and Trans-Pecos. They nest in multi-species heronries established by other heron species, primarily the snowy egret and tricolored heron along the coast. Colony size may vary from fewer than 100 to over 15,000 pairs. Since they nest about three weeks later than native herons and egrets, they often reuse abandoned nests, or deconstruct them and use the materials for their own nests, a behavior which is also common among the natives.

Each breeding male establishes and defends a territory from spring through early summer. In elaborate courtship displays, the males spread their wings, fan or sway their plumes, and prance from foot to foot. They may also make short flights with exaggerated deep wingbeats. Pairs are usually monogamous within each breeding season, with occasional trios of two females and one male. Once a female chooses her mate, nest building begins. On the coast, they generally nest in trees, shrubs, or reed vegetation on natural islands and dredge-material deposit islands. Depending upon the site and vegetation, nest heights may vary from ground level to about 30 feet up. The male collects sticks and the female positions them. Dead sticks are preferred, but live twigs will suffice if dead aren’t available. Stick stealing is rife and unattended nests (except those solidly glued together with feces) quickly disappear. Nest tweaking continues through incubation but is mostly restricted to the mid-morning and may have more to do with reinforcing the pair-bond than reinforcing the nest.

The nest is composed of two or three layers: a lower platform foundation of robust sticks, an upper layer of smaller twigs or vines, often bearing fresh leaves, and an occasional lining of herbaceous materials. Some nests are built on top of old ones and make a very solid structure. Others are so loosely constructed that the eggs can be seen through the lattice of sticks. The upper layer measures about 7-24 inches across and 2-12 inches deep. Nests are typically untidy and coarse, with excrement cementing the latticed sticks into a solid structure. Eggs are laid one or two days apart, as a rule, and a clutch usually contains 2 to 4 pale blue or green eggs. Since the female starts incubating with the first egg, the chicks each hatch one or two days apart, 24 days after being laid. Cattle egret eggs have occasionally been found in the nests of little blue herons, snowy egrets and great egrets – so they may sometimes stash their eggs for other species to raise. Both parents feed the young by regurgitation. Chicks fledge at about 5 weeks old and are independent by about 8 weeks. Once independent, juveniles disperse to other territories. They become sexually mature at 2 to 3 years.

Cattle egrets are sometimes seen as a nuisance, when close to populated areas, because their colonies can be large, noisy, and smelly. And in nesting colonies, the deposition of guano changes the soil chemistry, which can kill some plant species, such as oak, pecan, and winged elm. However, they may benefit the livestock industry by eating flies (and on rare occasions, ticks) from the bodies of cattle, and they don’t seem to have a negative impact on native heron species. Additionally, because they accumulate residues of some contaminants in their feathers, some researchers view them as a useful species for monitoring levels of environmental pollutants.

When cattle egret heronries occur over water, their guano can cause increased levels of nitrogen and phosphorus in water beneath or in the vicinity. These nutrients often stimulate production of thick mats of floating and submerged vegetation, particularly algae and duckweed, which can be a concern for anglers because the filamentous types of algae entangle and stop propellers of motorboats and prevent retrieval of fishing lures. (The moral here being don’t boat or fish under large heronries.) Egrets and herons are covered under the Migratory Bird Treaty Act of 1918. Once nests have been constructed and eggs are present, the rookery site becomes a protected area. After the birds nest, they cannot be harassed, or their site disturbed, without permits from the US Fish and Wildlife Service.

Where I learned about cattle egrets, and you can too!

The Cornell Lab: All About Birds
www.allaboutbirds.org/guide/Cattle_Egret/overview

Herons, Egrets and Bitterns: Their Biology and Conservation in Australia by Neil McKilligan
www.publish.csiro.au/samples/Heron_sample.pdf