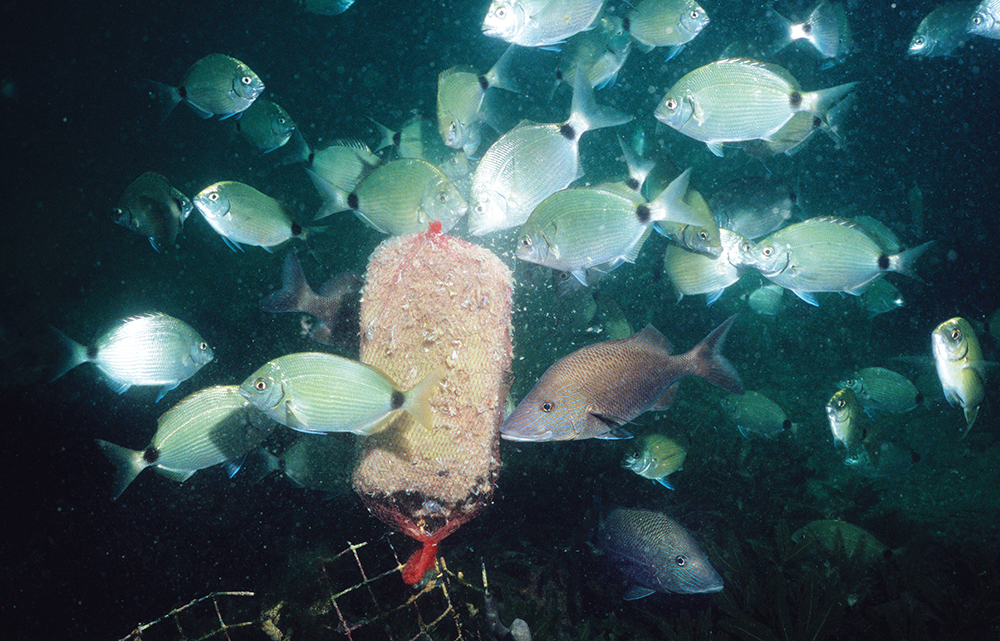 Every autumn we look forward to stocking the freezer with fat, autumn Spanish mackerel, a fish easy to chum close to the boat where they can be caught with short casts. My great uncle used that trick many years ago, using red label cans of jack mackerel that could be squeezed and flung upwind as he drifted along. This got me to thinking lately about chumming in general, when to use it, and when not to. Over the years we’ve chummed here and there to good effect, even in tournaments.

First, you need what they call biomass to chum. That means a few pounds of fish, sometimes sweetened with pogey oil, which is menhaden. Maybe add some oatmeal, to thicken the mixture. Ground up fish chum can be bought in frozen, five-gallon blocks,  slipped into a mesh bag and hung over the side. This works great for mackerel, if you’re drifting off the end of the jetties in nice weather and green water. Or tied up to a near-shore oil rig. If you Google “chum” a host of modern chum products will appear.

Frozen chum blocks bought at marinas are commonly used offshore, hung over the side in mesh bags. Or placed in pinfish traps and checked 24 hours later. I’ve seen hundreds of pinfish poured from those traps, soon used as live bait for mutton snapper and grouper. (This was at Marathon in the Florida Keys, also at POC for red snapper). Guides in the upper Keys anchor on the edge of a grass channels, tossing the chum block overboard, where they wait until the water astern is flashing with pinfish and pilchards, before throwing the castnet. Same thing at reefs on the ocean side of the Keys, except it was balao “bally-hoo” used for sailfish. Yank that bag a few times, and it releases fine fish particles that drift back in the current. Those same particles may interest gamefish, but the pieces are too small to feed them.

Even shrimp can be chummed. We used to drop chunks of canned, Ken-L-Ration dog food along the seawall at Port Arthur’s Pleasure Island, marking each spot with a small rock. Wait 10 minutes, toss the net, and a bunch of white shrimp came up kicking in the mesh.

Shrimpboats were always our favorite source of chum. It was always interesting to board a shrimpboat or pull alongside, trading a bucket or two of chum for cheap beer. The brand didn’t matter. One tough-looking woman, her shrimpboat anchored a few miles off Galveston, traded us a 20-pound bag of jumbo shrimp tails, also chum, for a dusty bottle of EverClear. And didn’t mind sampling it three hours before lunch. (We were guests aboard a 42-Hatteras that had a small liquor cabinet). Her shrimpboat was shoveling chum overboard, within sight of town, but the boat’s only customers were blacktip sharks and large jacks. We landed several and promptly headed further offshore to blue water.

Aboard each shrimpboat, sooner or later, is a mound of dead sea life, fish and crabs of many species. (If a fleet of shrimpboats is anchored out there, aim for those who left their running lights on, they’ve often been there longer than the others). We’d save big ribbonfish for bait, and everything else went in the chum buckets. Even after being iced down, a three-day summer tournament had that stuff a little ripe. I wore a glove that turned black, after patiently cutting small fish into chum “chunks.” While anchored at one snapper rock, after chumming for hours, a handful of big kings finally showed up and on that third day in that small boat, we won the big prize. Our biggest king weighed 49 pounds after eating a big, limp ribbonfish saved from the chum pile.

Not everyone wants to approach a shrimpboat and wave an empty bucket, especially in offshore waves. If not, try a shrimpboat in the bays, or quiet Galveston harbor on summer mornings. Or bribe one of the marina shrimpboats netting croakers in Matagorda Bay. They’ll probably fill a 5-gallon bucket or two with multiple species for dinero. Money talks. And we know the rest of that phrase, don’t we?

Out there in the Gulf your luck can run out fast, but a few years came and went. (With apologies to Steve Earl.) We had lots of adventures out there. Sixty miles out, we found a shrimpboat anchored with the crew asleep, an acre of sea life surrounding us. Countless schoolie kingfish, though nothing over 20 pounds. Lots of bonito, and also a bunch of big, yellow sharks from eight to 10 feet long. And ling, too. We caught about 10, but had neglected to get into the ling (money) pot in the tournament because they’re so hit and miss. Some were twice as big as that weekend’s winner. The shrimpboat must have dumped a ton of chum, calling up fish for miles around, because they wore us out. At mid-day I woke up in front of the center console, laying on deck, wearing bloody gloves.

Chumming can also go too far. I’ve seen guys haul two garbage cans of shrimpboat cull out there, tie up to an oil rig and shovel it overboard all day, attracting sharks from near and far. They never did catch a decent king that weekend. In the following years we learned to be more specific, stopped chumming for big kings, instead slow-trolling baits in clean water. No more sharks, either.

We’ve had big fun chumming over snapper rocks, using small “peanut” menhaden, the size you catch in Galveston canals in August-September at night. Fill a 5-gallon bucket, ice them down, and watch what happens when they’re flung behind an anchored boat in 90-foot depths. Even the snapper came up; I have this distinct memory of a red snapper’s dorsal fin breaking the surface, back-lit by the setting sun. Even more fun was tossing topwater trout plugs out there on Ambassadeur 6500 reels: kingfish would skyrocket repeatedly before grabbing on. The fight was on, but there was a down side: Unhooking  treble hooks from snapping kingfish isn’t much fun, requiring channel locks to quickly pry those hooks loose. So, we removed the treble hooks and kept casting. A king would jump 10 feet high with the plug and take off, ripping 20-pound line off the reel. Only to drop the plug, whereby another king grabbed on. In this way we had multiple runs on single casts. Kingfish are crazy about those small menhaden, even those that floated. The action went on even at mid-day until we ran out of chum.

Inshore, there are guides who anchor up about 30 yards from their favorite shallow oyster reef. They carry a hollow, plastic baseball bat, which is stuffed with chopped up baitfish. They rare back and “swing for the fence” and deliver a scattering of morsels way out there, often right on top of the reef at high or mid-tide. This turns on any redfish or even black drum, and the action is on. The water has to be too shallow for catfish, however. (Don’t try it in deeper Galveston Bay with its gafftops and TR hardheads). This winter I’m going to find my own plastic bat and try it after our local hardhead cats are gone, because my redfish spots in five feet of water are bedeviled by big, black hardheads that usually show up late for bait but when they do, the party is over. Same with stingrays, you don’t want to chum big ones into your spot. Both undesirable species grow scarce from November-March in many areas, which is a blessing.

Another shallow-water fish we’ve chummed up is the black drum. Bigger drum crave blue crabs, and so while prepping choice crab parts, I always sling the top shell as close to the strike zone as possible, followed by claws crushed by pliers.  Puppy drum prefer shrimp, of course.

Ideal sheepshead chum would be busted barnacles from pilings; guys have been scraping that hard growth with shovels and other tools for years now. They scrape away, right above those piling-hugging sheepshead, and the tasty chunks drop straight down to the fish.