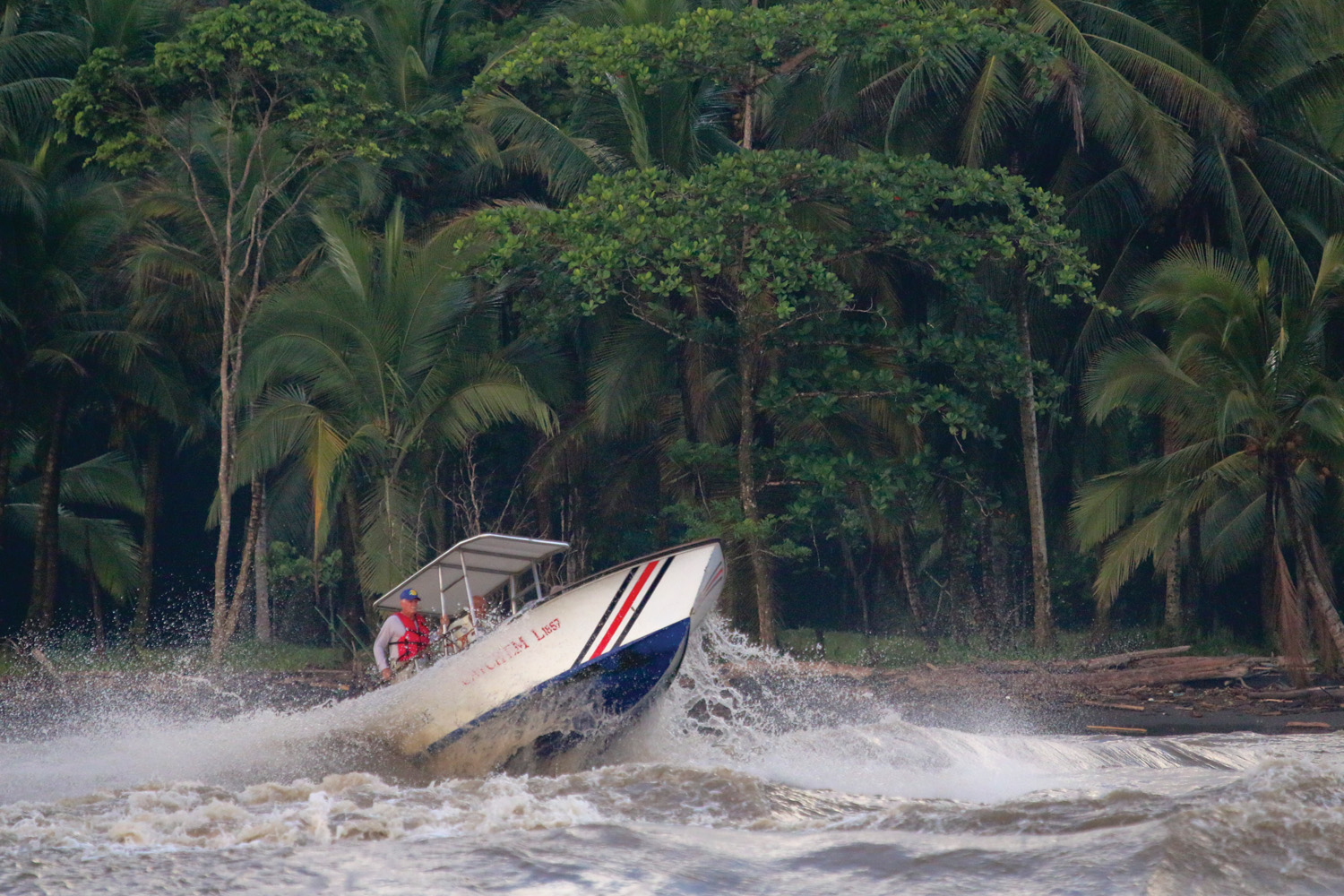 Punching a heavy center console through rough surf in a river mouth or jetty channel demands timing the sets, wearing life jackets, and knowing when to say “No!”

A dark stain of low clouds was spreading across the eastern horizon as our scooter nudged to a halt along the Matagorda Island shoreline. A distant storm was "making up" over the dawning Gulf but the weather seemed to be drifting to the north.

"I think it'll miss us," I said, grabbing my rod and wading belt.

We began shuffling and casting, angling with a moderate southeast wind. The open-water storm was at our backs, unnoticed until a cool gust ripped across the leeward shoreline.

My friend turned and promptly started backpedaling to the anchored boat. A purple wall of wind and rain had swallowed the low island. "Man, that thing's bearing down fast; we've got to get out of here!"

The first salvo struck as we climbed into the scooter. "We're screwed," I yelled. "We'd better just lay low and ride it out."

And, for once, we followed the correct plan. The open bay awash in torrential sheets and hammering chops was no place for a small boat.

We donned foul weather suits and flotation jackets and hunkered down in the semi-protected cove and took our soggy whipping. We both needed at least one additional layer of clothing but the squall pushed through in 30 or 40 minutes and, shivering, we were able to limp back to the dock.

The trip was a bust but at least we had the survival sense not to try to "make a run for it." Tragically, each year too many coastal anglers get caught by dangerous weather.

There are two reasons for this: First, hard chargers have a tendency to overstay amid marginal conditions; second, we tend to think, "Oh, nothing's bad going to happen to me." Well, it can and it does.

Fast-moving and powerful storms can occur at any time of the year along the Texas coast. The hard northers of winter probably are most dangerous because the bitter conditions can quickly sap a stranded and soaked boater; the toxic mix of, say, 55⁰ water and 45⁰ air is a no-nonsense killer but keep in mind that hypothermia from prolonged exposure can be a mortal threat even under relatively mild air/water temperatures.

The spring/summer storms and squalls typically spawned in the Gulf are warmer than the winter northers but the trade-out can be the increased danger from lightning. Horrifying bolts are a real hazard on open water.

The worst summer storms I have experienced were in Costa Rica and the Florida Everglades, but the Texas coast certainly generates its share of violent electricity. Afternoons seem to be prime time for energy-charged weather.

Twice, I have escaped extremely close lightning strikes. The first occurred while I was wading for bass in a small lake south of Houston. A major afternoon storm billowed up and the cooling cloud cover triggered a fast flurry of topwater fishing.

Naturally, with the typical "one more cast" mentality, I stayed too long. A fuzzy tingle buzzed through the graphite rod and, an instant later, the whole world went white as a flash bomb exploded in my face. The blast almost knocked me down in the thigh-deep water – I am extremely fortunate I wasn't killed.

The second near-miss occurred in the surf near Surfside Beach. A dark storm rolled from the west, but the inland cell looked to be five or six miles away. The sky was sunny over the beach and I continued to plug the green tide.

A jagged flash ripped from nowhere and struck the open Gulf about 50 yards offshore. It was the classic "bolt from the blue," and sufficient to shake me to my core.

You don't want anything to do with lightning storms; anyone who stays out, refusing to duck and cover, is tempting awful fate.

Lightning is terrifying but wind-driven waves probably are the greatest storm danger. But, from the perspective of a longtime surfer, I believe many reports of "big waves" in our bays are exaggerated. The bays are too shallow and the fetch is too short to generate much swell.

But the waves don't have to be that big to be a disaster to the small boat being tossed and bashed. Ragged two- to three-foot chops stirred by the passage of a powerful storm can overwhelm a 16- to 18-foot boat. The waves are close-packed, one almost on top of the next, giving the frantic driver little time to compensate. The shallow-water hulls of scooters and flats skiffs especially are vulnerable.

Slew sideways or plow into a rising crest, and it's easy to swamp the rig. If a dunking is imminent, you'd better hope the flotation vest is where it belongs, cinched around your torso, and not tangled amid the anchor line in a forward compartment.

Wait – I'd better modify that statement about big waves in the bays. The channel just inside a major jetty or pass or river mouth can stack swells pushing from the open Gulf. Incoming waves banging into a strong outgoing current can create a gauntlet of extremely uncertain navigating.

And, worth note, deep-water swells usually arrive in "sets" of maybe five or six waves, each several seconds apart. These set waves are significantly larger and more powerful than the rubble in between, and the wary skipper is well-advised to allow a set to pass before attempting to cross a shallow bar.

And don't dawdle when you pull the trigger; the lull is fleeting and another set almost certainly is gathering "outside." If you get caught and a big wave starts rising ahead to break, idle back and allow it to curl, then punch through the incoming whitewater – much less punishing than taking the full force of the crest coming down.

Better yet, don't get sucked into such a precarious predicament.

Years ago, I tore the elevated bow swivel seat from the deck of a bass boat by smashing into a heaving swell just inside the channel of the north Galveston Jetty. That was a rookie mistake – but there you go.

Also, the wake from a heavy-laden tanker can be a hazard for the unwary bay boater anchored along a ship channel spoil bank. This especially is true if the tanker maybe is moving faster than it should (strict regulations apply, but don't bet your boat or your life that they always are heeded).

Of course, many ship wakes pose no significant threat but I've seen some downright impressive swells grinding along certain shorelines and reefs in Galveston Bay.

Keep in mind that the tanker might be way over there but the wake can become a real and present danger. The safe plan is to use a long anchor line, allowing the boat to ride up and over each humping swell. A short line on a sharp angle can plunge the bow into an abrupt "pearl dive" – incredible disaster happening before your very eyes.

Once, near the Texas City Dike, I was in an anchored center console that took at least a foot of water over the stern as a thick tanker swell rolled past. Assorted flotsam such as Igloo coolers and tackle bags aside, we were fortunate to recover.

Worth note, the size of the wake is not the whole story. Much depends on the depth. The skiff tethered in, say, four or five feet of water along a spoil bank or over an oyster reef might be in a great spot for pecking away at a box of specks, but that hot spot can rapidly turn into “el wipeout grande” as the first rising wave reaches the shelving bottom.

The upside to a big tanker wake is that it really can't sneak up on you. The dark lines start fanning across the placid bay, giving ample time for the savvy skipper to react and retreat from a shallow shellacking. In short, haul the hook and aim for the cushion of deeper water. A lot of energy is coming your way.

Wind, rain, waves, lightning – oh, yes, and fog – are among the elements that can imperil the coastal boater. And, to reiterate, we sometimes get into trouble by lingering too long before seeking shelter. Or, worse, with cavalier indifference we push the limits in the rash belief that we somehow are special.

I reckon Moses was the last individual to part the sea for safe passage, so don't bet on that happening. Old Man Gulf could care less what a killer trout-master you are, and Lady Luck might be hung over from the beach party the night before.

So, one dark day, if you find yourself thinking, only a moron would get into a situation like this – you probably are making a remarkably astute observation.