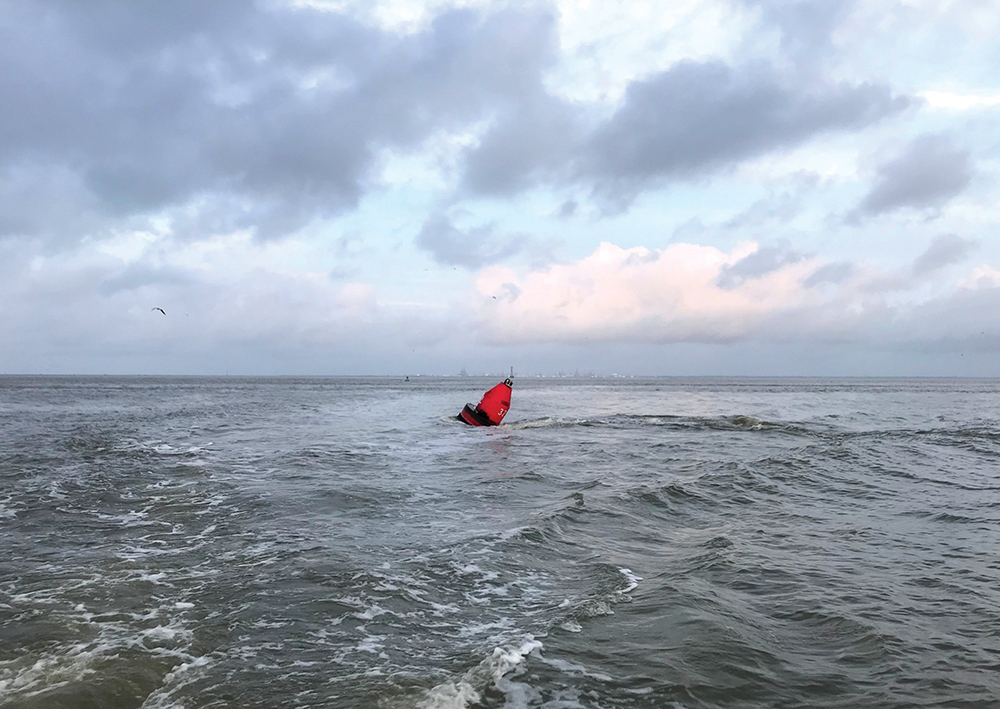 Massive incoming tides like this create such strong currents that summertime channel hotspots are unfishable until the current slows.

We headed out of the marina at 5:20AM even though sunrise wasn’t until 6:36. “Why are we leaving so early?” asked one of my clients. “It’s complicated,” I said. “I’ll explain when we get to our first stop.  Come on. It’s time to roll.”

Because one of the other guides had recently “learned” of one of the spots where we’d been fishing we needed to arrive earlier than usual. In addition, there were several naturally occurring phenomena to consider. We were fishing one day on the back side of a full moon and the best bite was just before sunrise as the moon was setting. After that, we weren’t experiencing a second flurry until midday which is very typical for a full moon pattern. The predicted low tide for the area we intended fish occurred at 12:04 AM and bottomed out at -0.6 feet below mean. The predicted high tide was to peak at 8:20 AM at 1.4 feet. That is a huge swing for our area! Sounds great right?

Many would say that extreme tide movement should result in better fishing but when water is rushing in like rapids it can create some issues. High velocity current in Galveston Bay often results in very off-color water. This is especially true during the summer months when water temperatures are hot and filled with suspended sediments and organics, not to mention all the freshwater runoff we’ve experienced this summer.

Swift incoming or outgoing tides can be especially problematic this time of year because some of our best opportunities for catching trout occur near the Houston Ship Channel. Unfortunately, this is an area heavily impacted by current because of its depth and lack of hard bottom substrate. I’m certainly not implying that trout cannot be caught along ship channel reefs and spoils during stiff currents because we’ve definitely done it. I can remember many days anchoring my Whaler off the bow so my clients could cast cross-current with soft plastics rigged on gumball-size lead heads. It used to work quite well in certain spots along the channel and other nearby humps. Silting, channel dredging, low salinity and the overall changes in the bottom topography have made anchoring along the channel in stiff current situations less productive than in years past.

I like to use heavy jigheads such as 3/8 ounce when anchored in deep water (8 feet plus) and strong current. Moderate currents can call for the use of 1/4 ounce heads in the same depths while anchored.  Drifting is a different ballgame. I can’t remember many times where we used 3/8 ounce jig heads when drifting other than at the old Bolivar well pads years ago. Normally, an 1/8 ounce is perfect for drifting in 8 feet of water or less, when there’s moderate current.

Deciding what size lead head to use is also based upon where we think the fish are staged in the water column, reel gear ratios and types of line being used. If you’re using a 7:1 gear ratio reel then you may be better suited throwing a 1/4 ounce whereas your buddy who has 5:1 ratio reel would likely do better tying on an 1/8 ounce jig head. Also, remember that braided line sinks much slower than monofilament so adjust jig head sizes accordingly. Sometimes it is simply trial and error until we get it right.

Working slicks can be tricky when there’s a lot of tide movement. We experienced this just the other day while chasing a school of oversized redfish in open water. I positioned my boat directly upwind of the smallest slick in a breadcrumb trail of larger slicks, only to soon realize my boat was drifting against the wind and away from the fish.  We had a 15 mph southeast wind at our backs but the outgoing tide was so strong that it was pushing us backwards into the wind (as indicated by my track lines in my GPS). It didn’t take long to figure out what was happening but it just proves once more that you have to really pay attention to all of the factors involved.

During strong tide situations we try to fish further away from the channel and near shorelines. Fishing back lakes until tide slows and open bay waters begin to clear is a great strategy, too. This also increases our chances for catching redfish and flounder until it’s time to go target trout. I personally enjoy the opportunity to catch multiple species anyway.

More often than not trout are suspended. They are rarely swimming around on the surface and they seldom just hug the bottom this time of year. Moving currents keep forage species off of the bottom and predator fish such as speckled trout and redfish will set up to intercept easy meals while exerting as little effort as possible. Eddies and current rips on the back side of small reefs, islands and small peninsulas are perfect ambush points when there’s moderate to strong tidal flow.

So I’ve spent a lot of time discussing strong currents. What about weak currents? Well, I like to fish near breaks along the Intracoastal Waterway and along the ship channel. Barge and ship traffic will create artificial tide movement giving us little flurries of action until tides get right to try other areas.

Another little trick I figured out years ago is to slow troll with the trolling motor in reverse and tell clients to cast while I’m trolling.  Something about this technique causes bites. I think it’s the movement of the boat pushing the fish around and “waking them up” as well as different angles of the soft plastics. I’m not 100 percent sure why it’s so effective but who cares if it works?

Bites are often very soft during slack tides so it’s a must to have gear that will enable us to detect those subtle taps. All of the rods in the Waterloo line-up are crafted to be exceptionally light and sensitive. My top three (in no particular order) are the HP Lite, Carbon Mag and Ultra Mag. My 13 Fishing Concept Z 2 reel spooled with 30 pound test Seaguar Smackdown Tournament braid that sits atop my Waterloo is a set-up that previously only dreams were made of. Current tackle technology almost isn’t fair.

I often get asked what my favorite tide is. Once again, there is no simple answer. Generally speaking, my favorite tide that I feel gives us the very best opportunity to catch fish here in Galveston Bay is when the tide changes from high to a low or low to a high with moderate current in between. If we’re fishing open bay reefs this holds especially true. If we’re in back lakes, near river mouths or bayou drains, I prefer a peaked out high tide switching to a low.

I hear many folks say that four tide days (as opposed to two) are their favorite. In many cases four tide days can be good but not all four tide days are created equal. Here’s a recent example: A few weeks back the high tide for an area that we’d been fishing peaked at 4:29 AM at 1.1 feet. The low occurred at 9:42 AM at 1.0 feet. The next high tide after that was at 12:20 PM and was again 1.1 feet. That’s virtually no tide movement during the first three tides that day. The predicted low was to occur at 8:49 PM at  -0.1 feet. The added variables that day were a stiff northeast wind and an extremely low barometric pressure. Both factors wouldn’t allow the tide to go out as scheduled. This scenario created a somewhat stagnant bay that made catching a challenge. Luckily I had one small area holding trout tight to a small live oyster reef so we were able to trick enough fish on Purple Demon Lil Johns to make it a good trip.  I really believe the fact that this soft plastic is scent impregnated helped immensely in the off-colored water we were fishing.

Here is an example of a good four tide day:

It’s important to understand that tides are not only effected by the moon and sun but other variables such as wind and barometric pressure. In our bay system a strong easterly wind will raise tide levels while westerly winds will push water from the bays. High barometric pressure will also lower tides and low pressure will raise them. Most of us don’t have the luxury of going fishing on only the “good” tide days but if we pay attention to all the factors involved we can make the necessary adjustments to turn the tides in our favor.