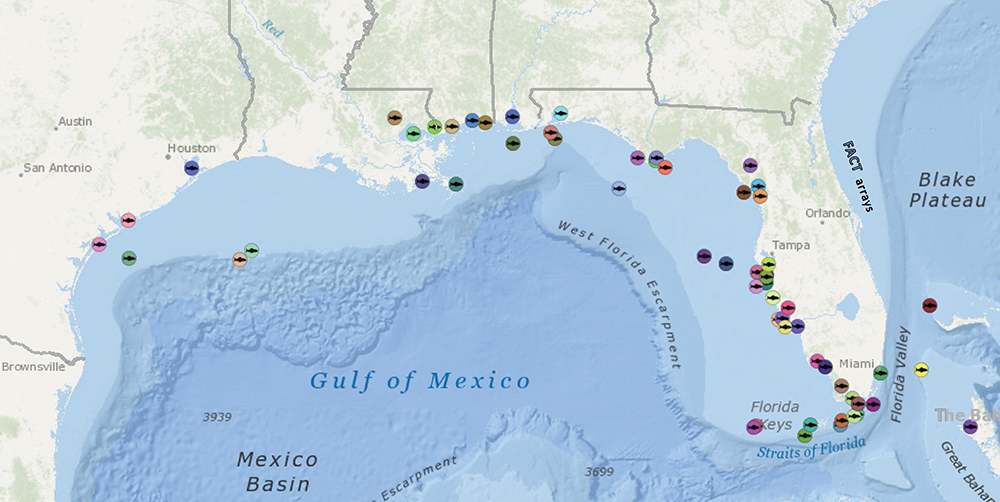 Figure 1. iTAG acoustic receiver arrays along the Gulf of Mexico

Over the next two years the Texas Parks & Wildlife Department and Texas A&M University at Galveston will partner to expand an acoustic tagging study of southern flounder and spotted seatrout into Sabine Lake. This study will be funded through the Gulf States Marine Fisheries Commission Inter-Jurisdictional Fisheries Program.  The acoustic receivers deployed in Sabine Lake will be part of a system of acoustic arrays called the iTAG network (Figure 1) that now exists across much of the US Gulf of Mexico (Gulf) coastline, including estuaries in proximity to Corpus Christi, Matagorda, and Galveston Bays. These acoustic arrays give management agencies and academic researchers the ability to gather information about fish movement within local habitats as well as long-distance migratory patterns.  This Sabine Lake array will help fill a blind spot in the western Gulf between Galveston Bay, Texas and Barataria Bay, Louisiana where there is currently a large area without receivers.

Sabine Lake is unique among the estuaries that are found along the Texas coast because not only does it receive more freshwater than any other Texas bay system, with inputs from the Sabine and Neches Rivers, but also the shape of the estuary makes it an ideal location for setting up an acoustic receiver system to track fish migration.  Sabine Pass, the long narrow opening to the Gulf of Mexico, is particularly suited for placing acoustic receivers.  It is roughly ten km long and one km wide and is the only direct way for fish to move from Sabine Lake into and out of the Gulf of Mexico. If a tagged fish enters or leaves the estuary, then well-placed acoustic receivers within this narrow inlet will capture that information. Sabine Lake itself is long and somewhat narrow with numerous bottlenecks where it joins with the surrounding marsh and riverine habitat.  Acoustic receivers will be strategically placed throughout the estuary and nearshore Gulf, which will monitor fish movements and residency within multiple habitat types, including the Salt Bayou Marsh to the west of Sabine Lake, the Sabine Lake Oyster Reef, the Sabine and Neches Rivers, multiple bayou tributaries connecting Sabine Lake to the Sabine National Wildlife Refuge to the east, and nearshore structure possibly including new artificial reefs that are now being developed.

The acoustic tags, which have a battery life of one to two years, are surgically implanted into the fish’s abdomen and any fish with a tag passing within approximately 0.5 km of a receiver will register the date and time of day and that fish’s unique identifier.  Periodically, the research team visits each receiver and downloads the data, which can now be done wirelessly using the newest model of receivers.  One cool and useful feature of the iTAG network is if a fish from one area happens to leave and migrate within range of receivers placed in other systems then that fish’s information will be recorded and uploaded to a shared database that can be accessed by others in the iTAG network.  That way researchers not only get information about local movements within their acoustic receiver array but can also gather data on long-distance movements of fish tagged from their study area.

Acoustic tagging studies provide information about life history and habitat preferences of different species based on time of year and other varying external factors.  Behavioral responses can be correlated to environmental conditions that help us understand and manage populations.  For example, it is a commonly held belief that rain from Hurricane Harvey literally flushed most of the large spotted seatrout from the Texas upper coast out into the Gulf of Mexico and that these fish did not return. Monitoring the response of a local population of tagged individuals to changes in freshwater input and salinity levels, such as that which occurs from a tropical deluge, could help explain major fluctuations in population abundance associated with such events.

Acoustic studies have already provided previously unknown details about the life history of several species. For instance, it was recently found that while most adult female flounder in Galveston Bay underwent a directional migration to the Gulf during the late fall/early winter as expected, some adult female flounder in Galveston Bay remained resident within the bay system during the spawning migration period and associated cold snaps. Further down the Texas coast in the vicinity of the Lower Laguna Madre, another acoustic study addressed the question of distinct bay and gulf populations of spotted seatrout, sometimes referred to as “tide-runners”. Gulf-tagged individuals moved up and down nearshore coastal locations and were found to make runs into the tidal inlets (potentially to forage) while individuals tagged within the bay were found to never leave the estuary but rather move long distances within the estuarine system. This suggests that the trout residing in the surf and those in the bay may actually be different sub-groups, at least on the lower Texas coast. Systems of acoustic receivers, such as the array being planned in Sabine Lake, will be able to address questions such as: how far into the estuary do the Gulf-tagged “tide-runners” move; are movement dynamics similar for bay trout on the upper coast and lower coast; and if not, how is their behavior different within the less saline upper coast systems?

Several arrays are being planned or expanded in estuarine and nearshore areas along the Gulf Coast. As acoustic arrays are deployed in greater numbers, many species of popular game fish will continue to reveal their secrets. Besides spotted seatrout and flounder, other species that are presently being tagged and monitored along the Texas coast include alligator gar, red drum, bull shark, blacktip shark, and tarpon, so don’t be alarmed if you find a small thumbnail sized tag in your fish’s abdomen.  Interesting and useful life history information is sure to be gained as these arrays are set up and more fish are tagged.  Stay tuned in; we will too.