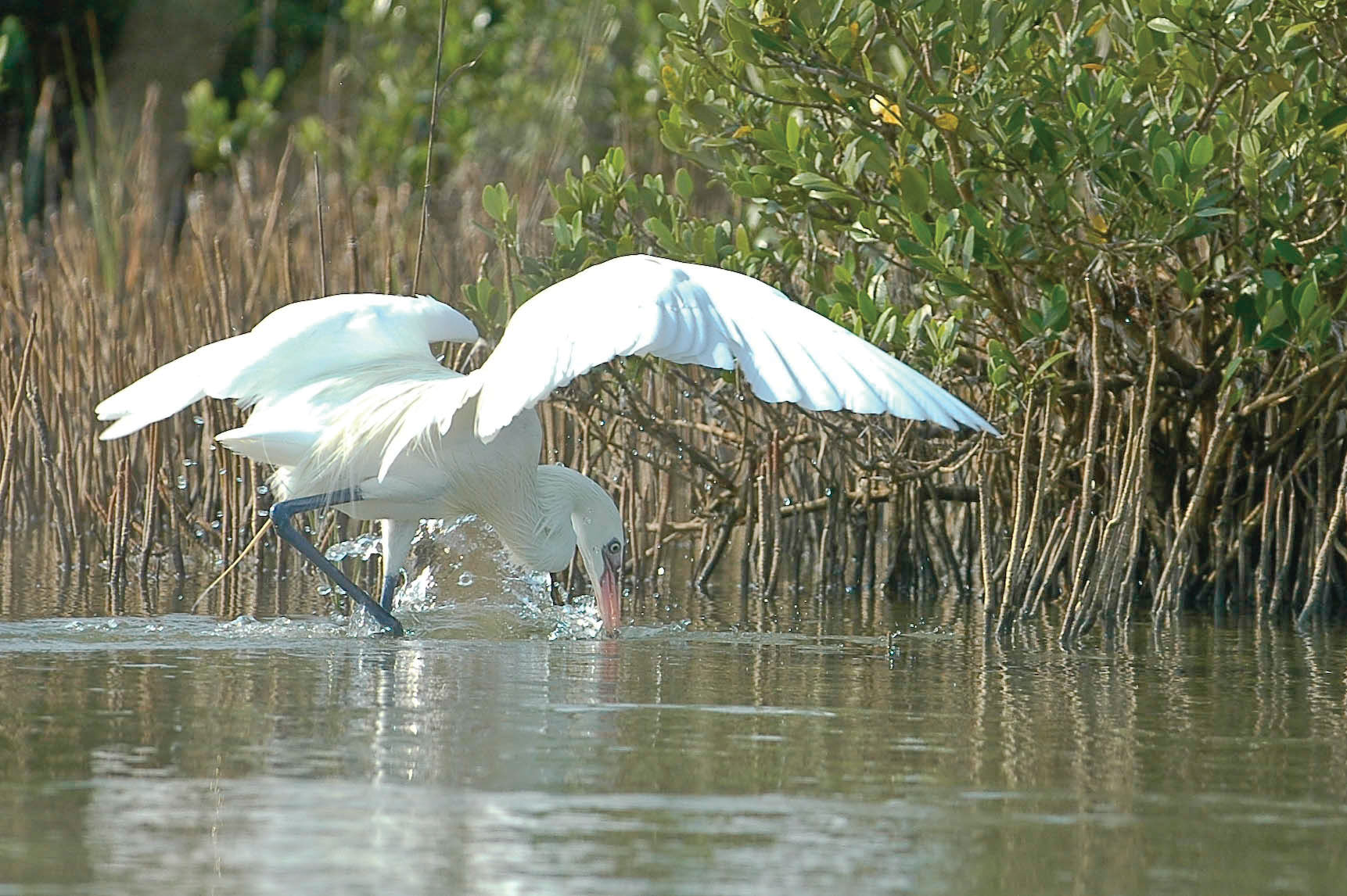 Bird watching is one of the fastest growing outdoors activities in the country, out-pacing hunting and fishing. In a recent survey over 51 million Americans reported "birding" as a regular activity. I've taken several guided trips over the past year where my anglers turned out to be more into bird watching than fishing. When presented with these clients I often joke that I wish everyone was so inclined because I can always find birds, but fish can be a bit difficult.

On a recent trip I met up with my customers who arrived with fly rods in hand and some very expensive binoculars slung around their necks. Turns out these two gentlemen are world renowned birding experts who have written books on the subject and make a living leading bird watching trips all over the world. While they were here to pursue redfish on the fly, it became obvious that fishing was secondary to viewing the myriad bird species of the marsh. Needless to say, I got quite an education on some of the finer points in identifying the subtle differences between similar species.

What surprised me during that trip wasn't so much what I didn't know; it was how much base knowledge I had tucked away in this ol' brain. I guess when you prowl around in the marsh for the majority of your life you learn things whether you intend to or not. Kayaking puts us quietly into their world and allows us to observe without disturbing them too much. I've never thought of myself as a bird watcher, but by the end of day two these gentlemen pronounced me a "birder". Merriam-Webster defines "birder" simply as "a person who watches and identifies birds." So if the shoe fits…

While I seriously doubt I'll ever travel the world in search of a particular bird to mark off my life-list, I can accept that I am indeed a watcher of birds. However, my interest in our feathered friends tends to be geared towards observing their behavior and how it can help me accomplish my main goal of locating feeding fish.

Every angler with a salty tide under his belt knows to watch for a tight flock of gulls wheeling and diving to the water. That one is easy, as evidenced by the weekend boat races. What interest me are the less obvious clues, the things that most folks overlook or never consider. Terns, egrets, herons and even the bright pink roseate can provide you information if you'll watch them with an open mind.

As mentioned above, we all know to look for the flock of excited gulls. I'll certainly fish those if the opportunity presents itself and I don't have to deal with other anglers elbowing their way to the table. What I prefer to do when the birds are working is to look for the smaller flocks that aren't getting all of the attention. Being in a kayak we often end up getting beat out in the race to the party. The next time you find yourself in this situation start looking outside the main activity. I've found that there are usually at least a few satellite schools nearby. Many times just two or three gulls sitting on the water can lead to a nice school that hasn't pushed the bait to the surface. The gulls know they are there and are just waiting to be first in line. Read the clue correctly and you can have a bite all to yourself.

Gulls in the marsh or over shallow water will often shadow redfish as they feed. These birds won't be in a tight flock wheeling and diving constantly, rather they will mostly just hover low facing into the wind while occasionally making a quick dive. A single "hanging" gull has put me into fantastic schooling redfish activity more times than I can count. Finding a group of half a dozen gulls acting in this manner is akin to coming upon the end of the rainbow…a pot of bronze surely awaits.

Terns get a bad rap among anglers as "liar birds." While it is true that the smaller terns will gather to feed on bait that is too small to interest most gamefish, there are times when they'll lead you to a good bite. The majority of anglers I deal with will totally ignore all tern activity. My experience has been that the larger flocks that are scattered over a fairly large area can be safely bypassed. Smaller flocks of a dozen or so in a tighter area are worth a look. Pull up and see if there are any larger swirls under them that would indicate feeding gamefish. A few casts should tell you if they're there.

The exception here would be if you see obvious splashes and can't draw a strike. I ran into this for years before I finally put the pieces together. It usually occurs off the beachfront or in the open bays. The terns are going crazy and the fish are obviously feeding, but you can't see the bait and they won't even give your lure a second look. Try throwing a clear soft plastic with sparkles and buzz it along just under the surface. The result will often be a Spanish mackerel. And when you get him into the yak he'll toss up a pile of tiny silver or clear minnows. I think what happens is that the smacks are slashing into tight wads of the little bait eating dozens at a time. Your typical lure is simply too big of a profile to match the hatch while the clear bait with sparkles looks more like a bunch of little minnows. Try it, I promise it works.

Back to the marsh, a loose flight of Forster's terns over a back lake deserve some attention too. Watch them as they cruise around over a shallow lake or flat and you'll sometimes see them pause and hang in one spot while looking down into the water. The term "bird's eye view" came about for a reason. These birds are looking for an easy meal and they know that a big redfish can provide it for them. If they see a school of reds, or even a single fish, they'll at least pause to take a look. I figure they've got a better vantage point than I do so why not listen to them. And if two or three of these scattered terns suddenly gather tight and go low it's nearly a sure thing.

The variety of shore birds in the marshes ringing our bays is incredibly diverse. Herons, egrets, plovers, pipers, curlews, etc. are all present. Some of these can put you on fish if you'll slow down and pay attention. They're all looking for a meal. A little snowy egret quickly walking down a shoreline franticly pecking at the water will almost always lead you to a school of reds feeding against the grass. Nothing pleases me more than to pull up into the marsh at daylight to find all of the birds up and about doing their thing. Active birds usually mean active fish. The major and minor feeds we all watch for apply to the birds just as they do the fish. When the wading birds are patrolling the edges of the ponds and hunting I tend to find the fish are aggressive. If I see the herons and egrets sulking way back in the grass the reds are generally less active.

I suppose in reality I'm less of a bird watcher than I am an observer of bird behavior. Pay attention to our feathered friends and they'll become partners in your quest for a tight line and heavy stringer.