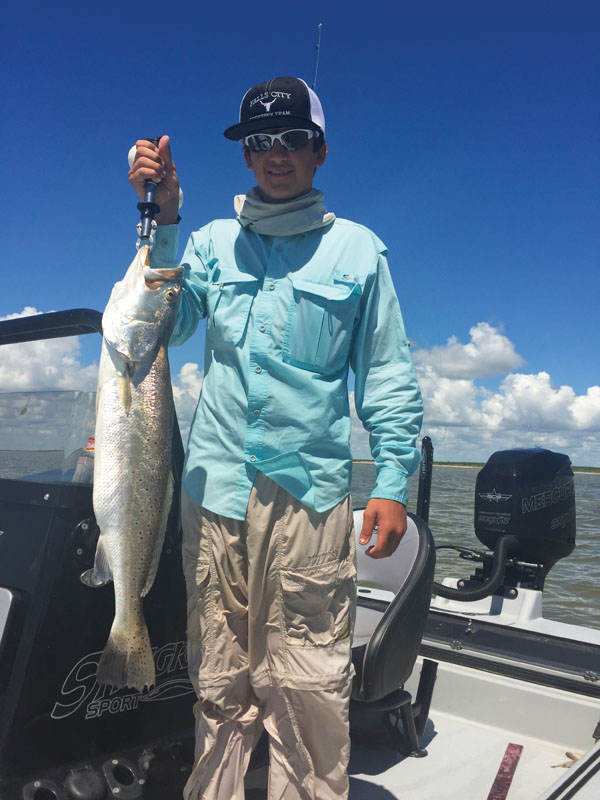 Collin Dziuk with his 2015 STAR-Teens lower coast winner. What are the odds—a young angler with two STAR-winning trout—five years apart?  Don’t miss the boat; sign up early and you will also qualify for great prizes in the Early Bird drawings!

Don't Miss the Boat Register Before the Early Bird Drawing Deadline Runs Out!

Memorial Day weekend will be here before you know it. Don't forget to mark your calendars!

The 27th Annual CCA Texas State of Texas Anglers' Rodeo (STAR) is sponsored by the Texas Ford Dealers, Tilson Home Corporation and Capital Farm Credit. This popular saltwater tournament drew over 48,000 participants in 2015 and a total of 118 anglers were the lucky recipients of some very impressive prizes and scholarships, making it one of the world's largest saltwater fishing tournaments. This year's event begins at sunrise Saturday, May 28 and ends on Labor Day, September 5 at 5:00 p.m. Could this be your year to claim one of over $1,000,000 in prizes and scholarships?

By signing up now you could win one of the many fabulous prize offerings just for registering early! The CCA Texas STAR "Early Bird" Promotion will again offer an awesome "grand prize" boat package! The Dargel 210 Skout with a Mercury 150 Pro XS OptiMax and McClain trailer, prize package value near $40,000. Everyone ages 21 and over that signs up now through April 29 will automatically be entered in the boat drawing along with 20 other great prizes being offered. Everyone 20 years and under will automatically be entered for 20 other great prizes, but not the boat drawing.

For anglers who forget or procrastinate thinking, "It will never happen to me or my kids," here's a story from the dad of the 2015 StarTeen Lower Coast Trout $20,000 Scholarship winner.

Five years ago, fifteen year-old Collin Dziuk of Falls City went fishing with a relative during his summer vacation. The relative asked Collin's dad to enter him in the STAR prior to their trip because he felt he had a really good chance to win. Collin was super excited about his first saltwater fishing trip and sure enough, ended up catching a 9-pound 2-ounce speckled trout! When Collin returned to the dock, his father broke the bad news. He hadn't entered Collin in the tournament because he never dreamed Collin would actually catch a fish big enough to win.

Talk about a reality check, Collin's chances of winning the StarTeen Trout Division $20,000 Scholarship with his trout that year was pretty clear–if only his dad had entered him.

After Collin's first and very disappointing fishing trip, he was finally able to go fishing again last year, but the relative would not allow Collin on the boat unless he was entered in the 2015 CCA Texas STAR Tournament. Good thing, because Collin ended up winning a $20,000 college scholarship for the biggest trout caught on the Lower Coast!

Last year ten tagged redfish were caught, but only five anglers claimed prizes. The others, unfortunately, were not registered for the CCA Texas STAR.

Other fish can net big rewards in the tournament. STAR contestants who catch the largest speckled trout in the north, central and southern regions of the Texas Coast will each take home the Mowdy 22' V with a Suzuki DF150 motor and Coastline trailer.

In the Inshore Division, the Shoalwater 19' Cat boat with a Mercury 115 ELPT 4S motor and McClain trailer will also be given to the anglers for netting the biggest flounder, gafftop and sheepshead.

This year, STAR participants ages 6-10 who catch the largest flounder, sheepshead or gafftop will again each be awarded a $50,000 college scholarship. For participants 11-17 years of agesome very exciting news this yearthe scholarships in these divisions have been increased from $20,000 to $25,000!

The participants 11-17 years of age, who catch the largest flounder, sheepshead or gafftop, as well as the largest speckled trout in each of the three coastal regions (north, central and south) will each be awarded a $25,000 college scholarship.

In addition to these nine scholarship offerings, participants ages 6-17 years old in 2016, are eligible for a bonus drawing that has also been increased. This special drawing will net one lucky youth a $25,000 college scholarship even if the participant never wets a line or enters a single fish during the entire tournament.

And, keep in mind, anglers under 18 years are not limited to participate and win in just the scholarship divisions. They are eligible to participate in the other divisions and win the great prizes offered by CCA Texas STAR tournament, as well.

Visit www.ccamembership.org to get signed up today. Plus, you'll make it in time for the April 29th Early Bird Drawings deadline!

For more information, including a list of weigh-in stations, instant-entry registration locations in your area and weekly leaderboard updates, go to http://www.startournament.org.

CCA Texas is a nonprofit organization of sportfishing enthusiasts and conservationists working to save the natural resources of Texas coastal waters. CCA Texas' Web page can be found at http://www.ccatexas.org.