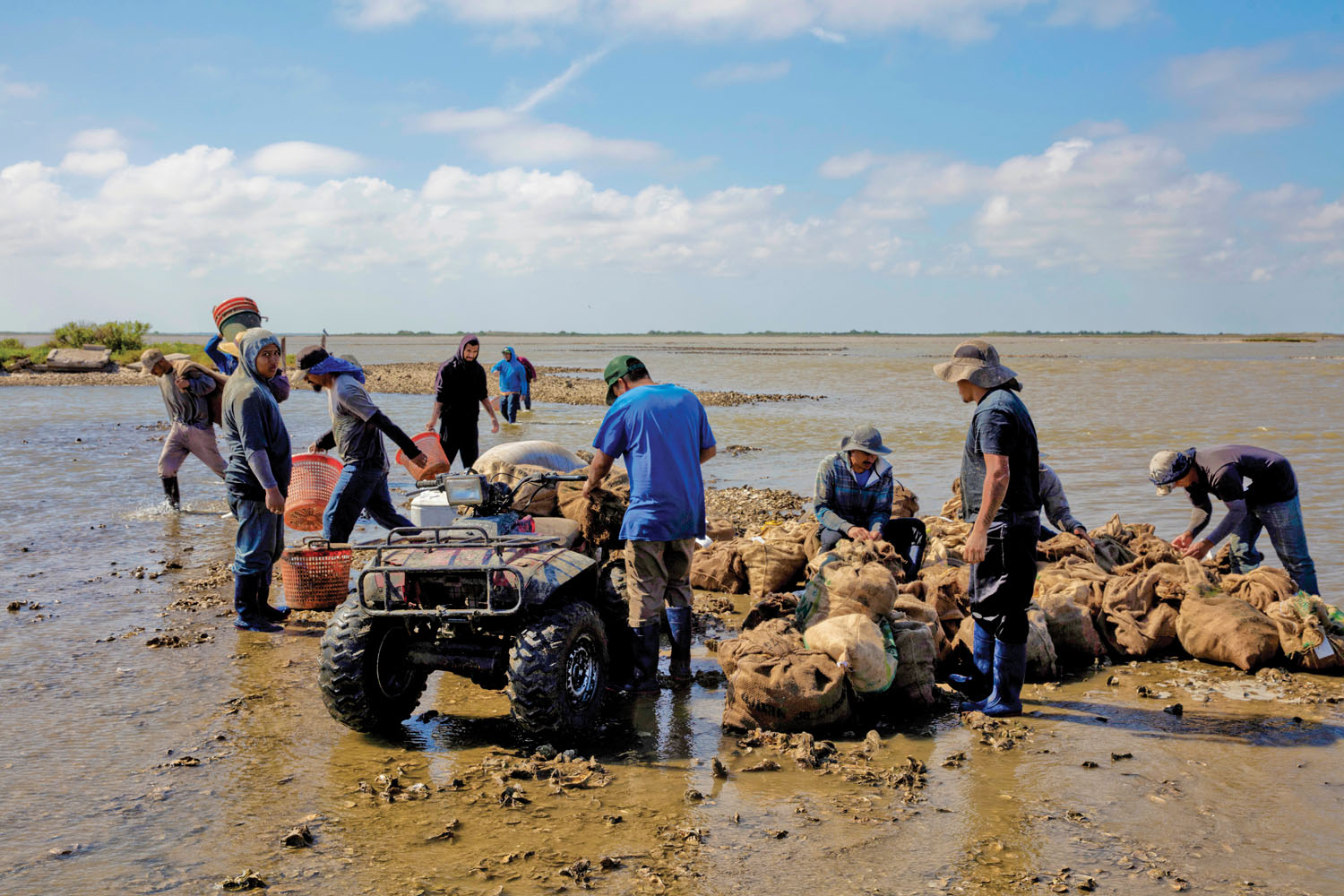 Shoreline oyster reefs in Christmas Bay, too shallow to dredge, were “cooned” by commercial crews. The devastation of sensitive reef and shoreline habitat will require years to recover.

This past April, Jason McCartney, an avid kayak angler, was in pursuit of speckled trout and redfish in the estuary near Tiki Island, adjacent to Interstate 45. The tide was extremely low, so while waiting for the water to rise, Jason decided to sit back and relax in his kayak.

A sudden noise drew his attention toward the interstate. A van and a truck stopped abruptly at the water’s edge off the feeder road. Eight men jumped out and stormed the exposed reefs with hammers and large plastic totes. As Jason describes, “They began busting up the oyster reefs and hauling them back to the vehicles. They went about their work quickly, making numerous trips in a 30-45 minute timespan.” Jason goes on to say that, “Something seemed off to me. Are they supposed to be out here? Is this legal?”

In short, yes, it is currently legal to harvest oysters from a shoreline. However, what these men were doing was reckless and very much illegal, as that area of Galveston Bay is closed for all shellfish harvest due to human health concerns. The actions of these men were not only destructive to sensitive habitat, but they could ultimately put someone’s health – and possibly life – at risk. Unfortunately, this is becoming a frequent practice by some commercial fishermen.

Texas oysters have been the subject of discussion for many years. The compounding effects of increased fishing pressure in smaller areas, hurricanes, tropical storms, droughts, flood events and unscrupulous actions by some within the commercial oyster industry have resulted in unprecedented destruction and loss of our public oyster reefs. During recent oyster seasons, there has been an observable shift in harvest tactics utilized by the commercial oyster industry. Appalling measures have been taken to harvest oysters with little regard for the impact on our fisheries, sensitive habitat, personal property and public resources. Some tactics employed include: walking the dredge up to the shoreline to harvest shallow water reefs, dredging under or adjacent to docks and piers, knocking down channel markers, dredging and cutting channels to venture further back into small bay systems, hand-picking oysters from shorelines, operating 4-wheelers in sensitive areas to retrieve harvest sacks and - as in Jason’s experience - harvesting oysters from closed waters.

One of the bay systems that suffered from such actions was Christmas Bay, a shallow waterbody within the West Galveston Bay system measuring approximately 5,700 acres at mean high tide. Until this past March, Christmas Bay had not been negatively influenced by human activity and was generally considered a unique, high-quality secondary bay system because of its abundance of oyster reef systems and seagrass, making it one of the most ecologically productive bays of the Galveston complex. Christmas Bay also happens to be one of 24 coastal preserves under the Texas Gulf Ecological Management Site (GEMS) Program. Sites within the GEMS Program are considered high priority for protection, restoration and conservation by both state and federal governments.

By March of this past year, with nearly 70% of the public harvest areas closed by Texas Parks and Wildlife Department (TPWD), a significant portion of the commercial oyster fishery was deployed to Christmas Bay. Kevin Burns, a Park Ranger at the San Luis County Park, was appalled by the entire ordeal. “It was crazy,” says Burns. “The mere quantity of oysters that were being taken was disturbing. They ran 4-wheelers up and down the shorelines, destroyed bird nesting areas, trampled seagrass and cleaned out some of our shoreline reefs. It will take years for Christmas Bay to recover.”

TPWD has been closely monitoring our public oyster fishery, and in response to current landings and fishing efforts, they recently proposed several regulation changes for the TPW Commission to consider for adoption at the August commission meeting. They are as follows:

1. Reduction in the daily sack limit to 25 sacks per day.

4. Closure to all oyster harvests in the following Minor Bays:

While all of these measures deserve considerable contemplation, for the sake of brevity in the article, the importance of recommendations 4 and 5 are outlined below.

Closure to harvest in designated bays - This simple idea has several key benefits. Most importantly, a sanctuary will offer protection for oyster broodstock. The larvae produced by broodstock within these sanctuaries will be carried by currents and tides to surrounding areas, seeding nearby public waters and serving as a source for sustainable oyster harvests in the future. Because these reefs would be off limits from commercial harvest, they would be able to grow in their complexity. One of the main arguments against oyster sanctuaries is, “If you don’t work oyster bottoms with rakes, sleds, tongs and dredges, they quickly will be silted over by sedimentation.” This is a misleading statement. It is true that our landscape has changed dramatically over the past century, and we do have more sediment washing downstream into our bays and estuaries. The real problem, however, is that we continually work our existing reefs down to the bay bottom, which results in little to no vertical relief. If we would simply allow our reefs to build and increase their 3-D structures, complexity and height, there would be little concern about them becoming covered in silt. Take the Sabine Lake reef complex for example: Measuring nearly four square miles (~2,500 acres), the oyster reef complex within Sabine Lake is potentially the largest natural reef in the United States, simply because we have not allowed harvest over the past seven decades. In a bay system that receives substantial runoff and sedimentation, this is a remarkable occurrence. Another claim against this process is that if oysters are not harvested, they will die from predation (from crabs, oyster drills, and black drum) or become covered in mussels. No successful predator or disease will kill all of its prey, and again, we need to look no further than Sabine Lake to refute this argument.

Restrict harvest with a 300-foot shoreline buffer – Because of the topography and shallow water depth of our coastal shorelines, oyster reefs within these zones are not able to build vertically. A typical shoreline reef may only be a few inches in height, making them highly vulnerable to intensive commercial harvest. What makes shoreline harvests so alarming are the potential negative effects on the entire ecosystem. Numerous scientific studies prove that oyster reefs on and adjacent to our coastal shorelines serve a unique function for our bays’ ecology. Researchers in Florida have found that oyster reef habitat supported nearly 4.5 times the aquatic biomass found in seagrass beds and roughly 11.5 times the aquatic biomass found in marsh edge habitat. Dr. Greg Stunz, Director of the Center for Sportfish Science and Conservation at the Harte Research Institute for Gulf of Mexico Studies in Corpus Christi, and his team of marine biologists, have made similar discoveries here in our coastal ecosystems and are worried about the fate of our oysters. “We specifically have become concerned with the recent intensive harvest of very shallow reefs (less than three feet) that have, up until recently, been generally reserved from commercial harvest,” said Stunz. “Not only are destructive fishing practices used, but these reefs are likely a reserve for oyster spat and are particularly beneficial to our bays and estuaries. We have conducted numerous studies on the importance of shallow subtidal oyster reefs in Texas over the past several years. Our findings have shown that these areas support extraordinarily high densities of ecologically and economically important fisheries. Moreover, the juxtaposition of these areas within the habitat mosaic, typically surrounded by other habitat types and free of harvest, cause these areas to be unusually productive. These areas are much more productive than deeper open water reefs. Thus, the intensive harvest of these shallow reefs is alarming and raises concerns.”

Oysters and their subsequent reef systems play critical roles in our coastal ecosystems. They provide habitat for a variety of aquatic species, serve as organic biomass for coastal food webs, stabilize shorelines, reduce coastal erosion and sedimentation, and improve water quality by serving as filter feeders. Oyster reefs are without question the foundation of our coastal ecosystems. Consider this: We, as a state, take extreme measures to protect our seagrasses and spartina marshes on our coastal shorelines. We establish state scientific areas to protect seagrass and maintain fish habitat, and we require that spartina marsh be restored if any is disturbed by coastal development. Why would we not offer similar protections and considerations for our oyster reefs, which have been proven to provide unique services for our coastal ecosystems?

The ever-increasing demand and diminishing supply of oysters on our public reefs is troubling. Mark Ray, Chairman of Coastal Conservation Association Texas, has been dialed in for many years on the issues that face Texas’s public oyster reefs. “Something must be done,” states Ray. “We simply cannot keep doing the same thing, employing the same management strategies and thought processes, and expect a different outcome for the problem that is before us. TPWD should be commended for thinking outside of the box and proposing these additional measures to protect our public oyster reefs.”

There will be opportunities this summer to provide comment in support of the proposed measures at public meetings along the coast. You can also participate in the TPWD commission meeting to be held August 23-24, 2017 in Austin. All concerned anglers, conservationists and outdoor enthusiasts are encouraged to share their concerns for our public oyster reefs at these public meetings. Your voice is needed to help turn the tide with this struggling fishery.