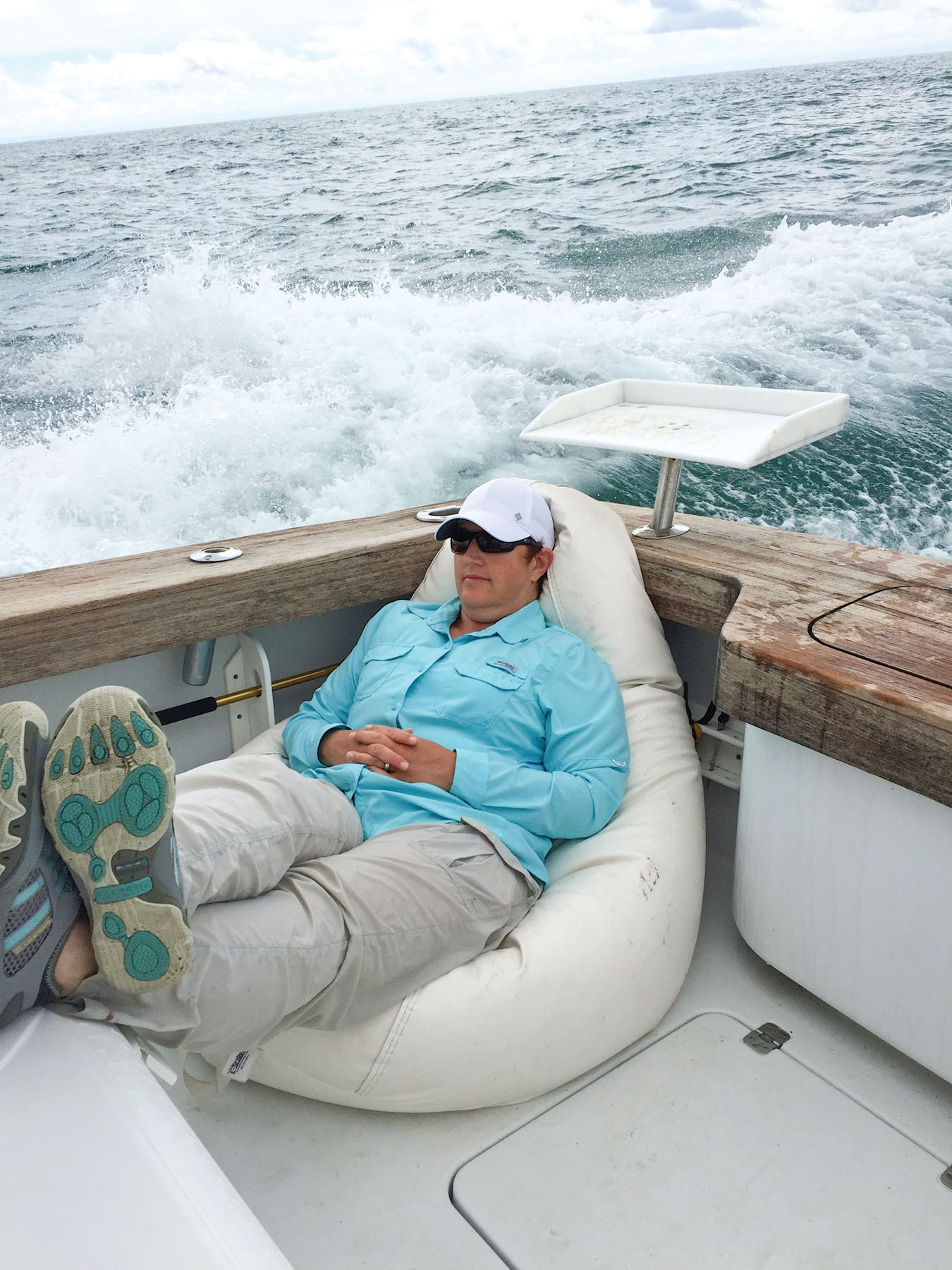 Slow day for cobia but Camille discovered bean bags.
I'm always a bit surprised when I hear coastal anglers speak negatively of CCA. I guess I can understand taking exception with a position on a particular issue but overall it is hard for me to see this organization as anything but good.

As a youngster I was privileged to have been a fly on the wall listening to guys who helped organize the Gulf Coast Conservation Association. I was just a kid working at the old Marburger's on Spencer in Pasadena. I remember listening to them talking about how something needed to be done, to stop the downward spiral of redfish. They wanted to give reds and trout gamefish status to end commercial harvest. Gill netters were their main target and I recall thinking that would be a pretty big hill to climb.

The guys I hear speaking against CCA nowadays are pretty young. I suppose they don't know the history and weren't around for the really bad times. Believe it or not, there was a time on the Texas coast when redfish weren't found on every grass flat as they are now.

As a teenager I was on the water every chance. I had a boat shortly after getting my driver's license. Friends and I prowled all the Galveston Bay system, sometimes distances and to places we probably shouldn't have ventured. Under the mentoring of guides and old salts who frequented Marburger's we got pretty dang good. But all we caught were trout. Catching a single redfish was noteworthy. There just weren't many.

The reasons were pretty obvious if you ventured into a marsh or worked a shoreline close to the grass–gill nets were all over the place. I saw far more dead reds in those nets than I ever caught. Then along came the blackened redfish craze. The nationwide demand led to an insane effort by netters. Spotter planes would locate breeding schools off the beachfront and direct the net boats, allowing them to wipe out entire schools. Now they were not only taking out the juveniles in the bays, they were taking away their ability to reproduce.

It was frustrating, but as a kid I couldn't envision a solution. Thank goodness there were older, wiser and more determined individuals like Walter Fondren and a host of others who cared. It certainly wasn't easy and in fact became quite a nasty battle. The founders persevered through threats of bodily harm, burned fishing cabins and other acts of vandalism. Often referred to as the "Redfish Wars" it was a difficult time for those involved. House Bill 1000 became law in 1981, giving trout and reds gamefish status which immediately took them off the menu at restaurants and fish houses.

Not long after, the first redfish hatchery came online and started pouring fingerlings into the bays. The results are obvious to anyone who spends time in Texas bays. These two things alone are enough for me to pledge my allegiance to CCA. Without HB 1000 I honestly don't think we would have redfish in our bays and certainly not the healthy population we enjoy today.

All of this was brought back to me on a recent trip to North Carolina. Camille and I were invited on a trip purchased at a CCA banquet to go fishing for a couple days with one of the directors of CCA North Carolina. I've always heard about the great flood tide fishing in South Carolina and figured North Carolina would be much the same. It wasn't.

Our host, Dr. Chris Elkins, is a retired college professor with a passion for saltwater. He is currently serving as the Fisheries Committee Chairman. He and his wife have a beautiful home facing the bay near Harker's Island. In talking to him it became obvious that he is in a battle reminiscent of our Redfish Wars. One of his boats was burned at the dock, his gear storage building was burned to the ground and he has been threatened numerous times on the water.

Why? Because North Carolina still has gill nets and he's pushing to change that. The deck is stacked against him as the state fisheries commission is heavily influenced by the commercial fishing industry.

The first day we ventured outside on the beachfront to hunt for migrating cobia aboard his 27' boat. Heavy cloud cover kept the bait balls down and we spent a lot of time cruising many miles of beachfront. There were a surprising number of boats out there, many more than you'd see in Texas. The few bait balls we did locate were either being worked by other boats or a boat was leaving as we arrived. Dr. Elkins noted that more and more anglers have turned to fishing the beachfront or offshore due to the lack of fish in the bays.

Day two the winds were up a bit and we decided to go out on the skiff and see what we could find in the bays. Not much. We went all over the place trying several areas. Every stop looked awesome. Clear water, grass flats, oyster beds and marsh shorelines loaded with bait that should have also been loaded with trout and redfish. The habitat was as good as any I've ever seen, miles upon miles. I saw a grand total of two reds that were maybe 18 inches, and caught one. While blind casting a drop-off near a flat, I caught a small flounder which really surprised Dr. Elkins. Apparently the commercial guys really hammer them.

At one point we came up to a really cool looking marsh island surrounded by a big grass flat with deep feeder guts. Within the island were several small lakes. As we fished it he noted this was the last place he had found a decent sized school of reds. It had been a couple of years. He and a buddy found a good school working the lakes inside the island. The third day fishing this school they noticed a commercial boat nearby. The following day they arrived to find several netters surrounding the island with gill nets. These guys then proceeded to go into the lakes and drive all of the reds to the nets. He and his friend watched helplessly as a couple hundred redfish were dumped into boats and hauled away.

On the way back to the house we passed by the dock where he keeps the bigger boat. As we rounded the corner he said, "Well it's still there." It wasn't a flippant remark. He actually has to worry about losing his boat every day. I can't imagine.

It was like going back in time to pre-HB 1000 Texas, and served to strengthen my feelings towards CCA. I may not agree with every position they take on every issue but I will never doubt the overall good they have done for Texas coastal fisheries.