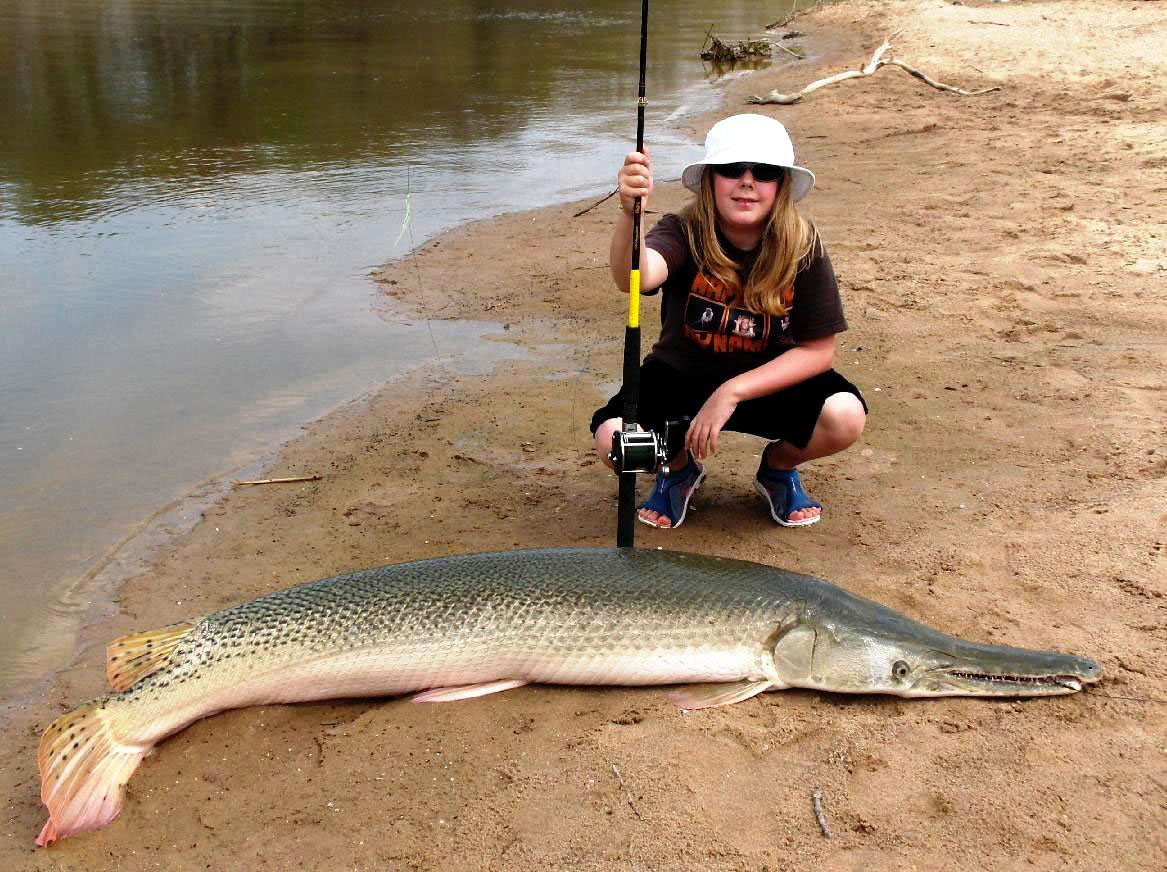 12-year old Shelby Hunter with a 120 lb alligator gar she and her dad Kim Hunter caught and released during a kayak fishing trip.
Found only in North America, alligator gar are one of the world's largest freshwater fish. They can live for many decades and reach massive sizes. Those who have seen or caught a large alligator gar don't soon forget the experience, because these ancient giants leave a primordial impression. But in recent years the range of this once populous fish has sharply declined. Fisheries biologists suspect loss of habitat and over-harvest are two likely causes. In an effort to stem the downward spiral of the alligator gar, most Gulf Coast states have enacted regulations to protect the species. For the first time, Texas is considering similar legislation.

Concern from anglers and actions by other states to protect alligator gar has prompted the Texas Parks & Wildlife Department (TPWD) to take a closer look at the alligator gar. TPWD has drafted regulations that emphasize protection of large adult fish which are critical to sustainable fisheries. A healthy population of adult gar also provides the opportunity for recreational anglers to potentially make the catch of a lifetime. Having spent many memorable years chasing alligator gar, and witnessing firsthand their vulnerability to over-harvest from commercial fishing, this is an issue that strikes a chord with me.

You might be wondering why a tough old gar that could survive in a mudhole needs protection. That is a valid question. To answer it one must first understand a few basics about gar ecology and how alligator gar differ from other gar species.

All gar are primitive fish (considered to be surviving holosteans) having evolved at least 65 million years ago. Although gar are often grouped together with nuisance or introduced fish species, they are native to North American waters. Their bodies are covered by thick armor-like "ganoid" scales. Gar spawn in protected flooded backwaters and their eggs are poisonous to humans. All gar possess an air bladder that functions as a primitive lung, enabling them to survive in stagnant water by "gulping" air at the surface. They are opportunistic feeders, ambushing their prey with a powerful side swipe, clutching it with their sharp teeth and swallowing it head-first. Gar primarily inhabit freshwater, but they often venture into saltwater environs and are sometimes seen or caught by coastal anglers.

There are 4 recognized species of gar in Texas- the longnose gar, spotted gar, shortnose gar, and alligator gar. The most widespread and common of these is the longnose gar. Longnose gar are slender fish with a long snout and needle-like teeth. They can reach lengths of 60 inches or more. Longnose gar are prolific and distributed throughout most of the central, southern, and eastern portions of Texas. If you have observed gar near your home, chances are they were longnose gar.

Spotted gar are slightly smaller in size than longnose gar, and have attractive leopard-like markings on their bodies. Spotted gar primarily inhabit rivers and lakes in the eastern portions of Texas where they can grow to lengths of 40 inches.

Shortnose gar are the least common and least known gar in Texas. They have a relatively short broad snout, and grow to 30 inches in length. Shortnose gar live primarily in the Red River basin on the Texas-Oklahoma border.

Alligator gar are the true giants of the gar world. In Texas, they inhabit sluggish rivers, bayous, and coastal backwaters. Because alligator gar can survive in both fresh and saltwater, they can be found in brackish rivers, estuaries, and occasionally in the surf. Alligator gar can be distinguished from other species by their wide flat snout and two rows of teeth on their upper jaw. Alligator gar can reach lengths of 10 ft. and weights of 300 lbs. They are one of the world's largest freshwater fish. Research indicates alligator gar spawn irregularly, grow slowly, and take many years to reach maturity. This makes them especially vulnerable to over-fishing. Some researchers believe very large alligator gar may be 50-75 years in age. In spite of their reputation as "trash fish," alligator gar have minimal effects on sport fish populations.

The historic range of the alligator gar in North America has markedly declined. Alligator gar are no longer found in IL, IN, and OH. Currently, no harvest is allowed in TN or FL, and harvest is restricted in AR, MS, AL, and OK. Texas and LA remain the last states with no restrictions on the harvest of alligator gar.

I strongly encourage you to share your voice and help protect this unique and vulnerable inhabitant of our rivers and coastal ecosystems. Texas has one of the last substantial populations of large alligator gar in North America. These fish exist no other place in the world. They deserve our consideration.