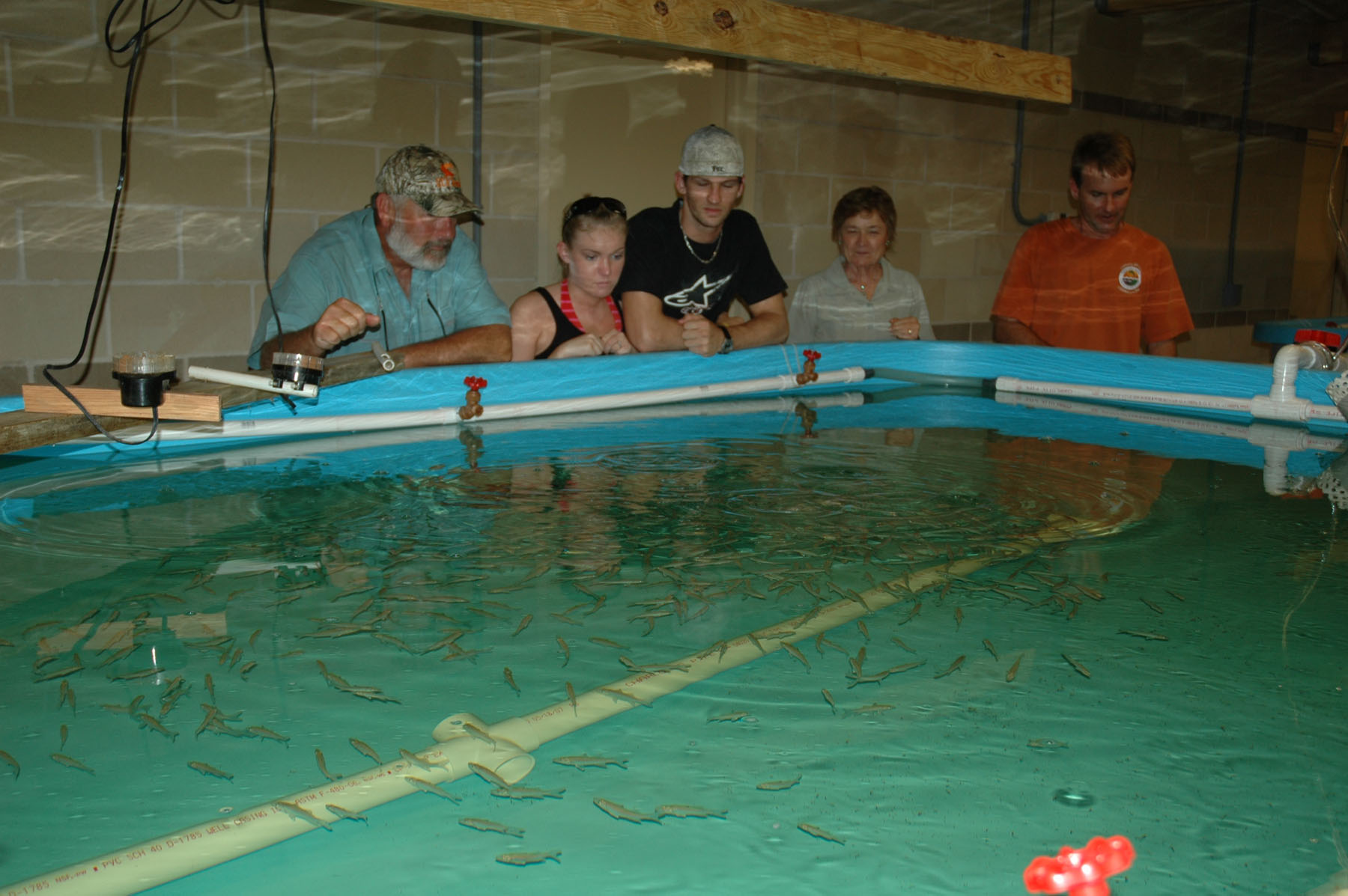 Dr. Joan Holt and Jeff Kaiser of UTMSI look on as we admire fingerling snook.

"The University of Texas Marine Science Institute, located in Port Aransas, is the home of the most advanced marine fisheries research in the world. It is currently pursuing spawning and rearing research on a number of critically important recreational species. CCA Texas could fund the construction of a free-standing, permanent 2,200 square foot research lab that would be the center for furthering and expanding UTMSI's efforts in hatchery science." Pat Murray, Executive Director, CCA Texas September 2005

On August 17, 2007, ceremonies were held at UTMSI in Port Aransas to celebrate the grand opening of the CCA Texas Laboratory for Marine Larviculture, the latest page in a rich history of accomplishment in fisheries research. The pioneering research that has enabled TPWD to build and operate hatcheries that support the largest and finest marine fisheries stock enhancement programs the world has ever known was conducted at UTMSI back in the late 1970s. Since then, UTMSI has remained the leader in this field, assisting not only TPWD, but many other state agencies and organizations to establish similar programs. The Larviculture Laboratory will be the springboard for taking the studies even further.

Currently, UTMSI is working with southern flounder, snook, ling, and hopefully some day soon, tripletail. It is hoped that just like trout and redfish, these species too will enjoy the boost that hatcheries can provide, and that sport fishermen can continue to enjoy catching them for many generations to come. Stock enhancement is a powerful tool and its impact can be seen along every inch of the Texas coast.

Perhaps the best part of this story is the funding aspect. Speaking on this, Mark Ray, chairman of the CCA/UTMSI Building Committee and CCA Texas chairman, told the audience, "Every chapter president, volunteer and member can take personal pride in putting this scientific jewel in place. Virtually every single dollar was raised by the hard work of CCA Texas volunteers throughout the state. There were no foundations involved. No corporate funding. This incredible lab was funded purely by the hard work of recreational anglers."

Ever since its earliest days when founders of the original Gulf Coast Conservation Association gathered in Rudy Grigar's tackle store in Houston, GCCA- now CCA Texas, has remained a leading force and contributor in the area of fisheries research. Today, with membership approaching 55,000 in Texas alone, credit for all that has been accomplished truly belongs to the fishermen themselves. Robby Byers, CCA Texas executive director, puts it this way, "When we can fund a research facility like the Marine Larviculture Lab, it is a true testament to the strength and success of our organization. Our growth in membership and fundraising capabilities over the last 10 years has really made a difference. None of this would be possible without the thousands of dedicated volunteers that care so much about our coastal resources."

Dr. Lee Fuiman, director of the University of Texas Marine Science Institute, stressed the importance of continuing research during his address to those attending the grand opening. "The key to success for natural populations of fishes often lies in the survival of their larvae. Even in hatcheries and mariculture facilities, survival of these early life stages is usually the critical step. A new laboratory for researching the requirements of larval fishes is crucial to advancing our understanding and developing new technologies that will improve the health of fish populations in Texas and beyond. The wisdom and generosity of CCA has made that facility possible."

As a Life Member of CCA Texas, words will never be enough to describe the sense of pride I felt when Mark Ray came to the podium and described how the project had been conceived, funded and managed. Looking around, I noticed lots of heads nodding approval. The best part for me came during introductions that followed when some of those nodding were credited with having attended that meeting at Rudy's store. I felt great honor to be able to shake those hands, and I likewise was very proud to have been a contributor. -Everett Johnson