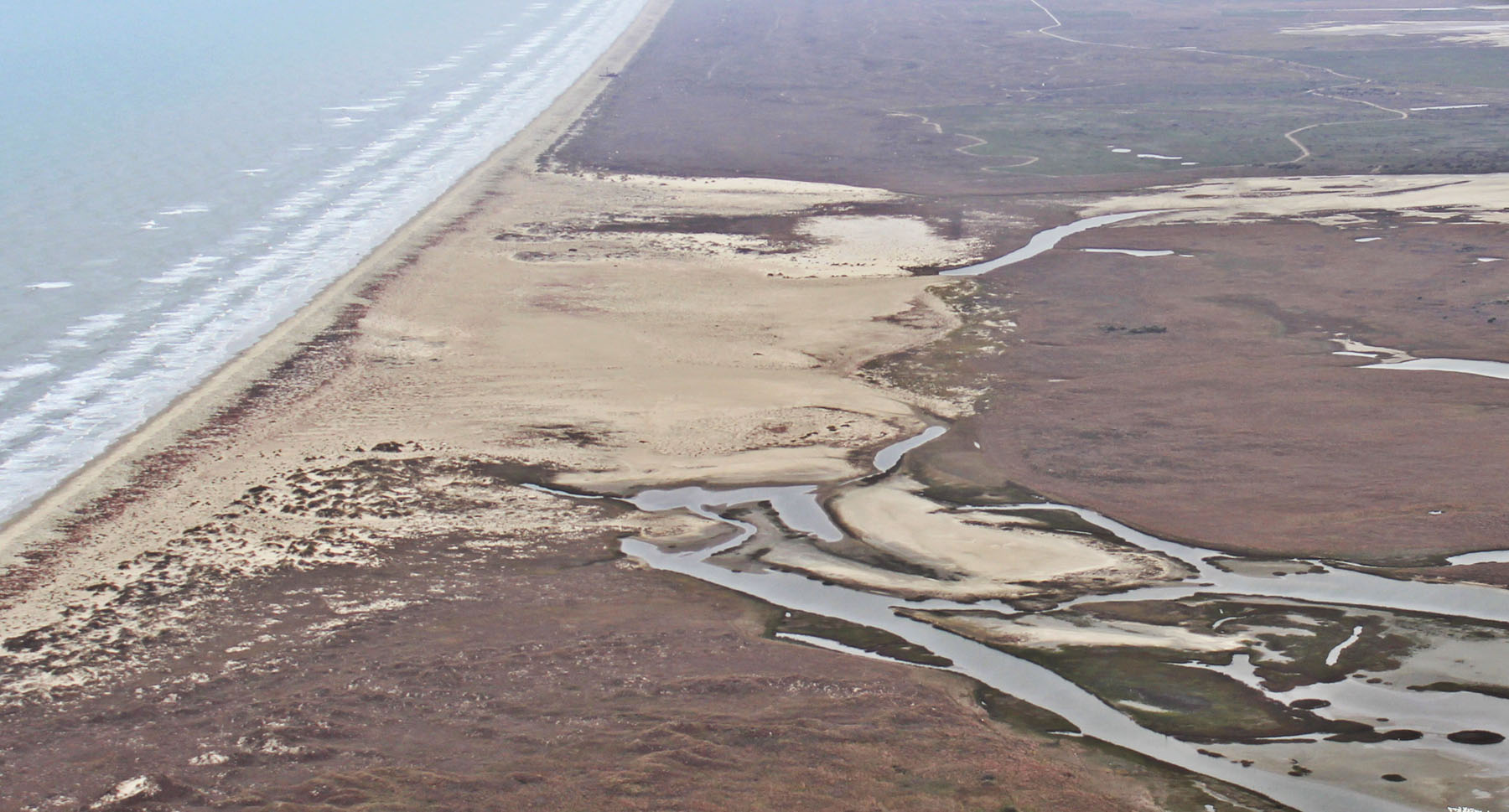 Aerial view (February 2014)—Gulf of Mexico surf on left, Cedar Bayou in foreground and Vinson Slough channel remnant at top-right.
For the first time since they were bulldozed closed in 1979 due to the Ixtoc-I oil spill, Cedar Bayou and Vinson Slough will be dredged to their historical flows paths. The contract for construction was awarded by Aransas County in December 2013 and the contractor is poised and ready to begin work on April 15, 2014. With a construction window of six months, recreational fishermen will enjoy the magic of Cedar Bayou in the fall of 2014. This project will once again allow the much-needed water exchange between the Gulf of Mexico, Mesquite Bay, the surrounding wetlands and ultimately San Antonio, Aransas and other surrounding bays.

"This dream is finally becoming a reality," said Aransas County Judge Burt Mills. "This project will create a tremendous economic and environmental opportunity for Aransas County and the entire State of Texas. Through the hard work of so many partners, we will now push this initiative forward."

Since the early 1900s, Cedar Bayou and Vinson Slough remained open approximately 87% of the time until being closed in 1979. There were short-term closures during this period and records indicate two dredging events, one in 1939 and another in 1959, but Mother Nature did her job and kept her open. Since the 1979 closure there have been two attempts to dredge the bayou, once in 1987 and a second time in 1995. Both attempts were short on money and the effort to once again connect Cedar Bayou and Vinson Slough fell short. Vinson Slough is a critical part of the project and helps provide the adequate water flows necessary for the pass to keep itself open.

The effort to restore Cedar Bayou dates back to 1985 with the creation of Save Cedar Bayou, Inc. (SCBI). In 2003 the Aransas County Cedar Bayou Advisory Committee was formed to take a fresh look at the challenges of restoring this critical natural pass. The Committee's report, issued in November 2003, reinvigorated the public and private interest to get the job done right. Between 2006 and 2008, Cedar Bayou, Inc. and the Texas General Land Office spent $400,000 collectively to study Cedar Bayou and develop a plan to open and maintain the pass. After continuous efforts to obtain the US Army Corp of Engineers (USACE) permit for construction seemingly stalled and the continuous battle for funds, SCBI requested that Aransas County take over the project. In December of 2009 the permit application was transferred to the county and the effort to open the pass began to move forward. Aransas County pushed hard to resolve all issues with the USACE permit and on August 3, 2011 the USACE issued the permit to Aransas County to restore Cedar Bayou and Vinson Slough.

"You have a national treasure out here and it needs to be restored back to the way Mother Nature had it," said Col. Christopher W. Sallese, US Army Corps of Engineers.

The next push. raise the necessary funds to get the work done! CCA Texas stepped forward and partnered with Aransas County to raise the necessary funds and in February 2012, announced that the organization was committing $500,000 to jump start the process. Over the next 18 to 24 months, CCA Texas and Aransas County worked many different avenues to secure the necessary funds through government grants, private foundations and individual support. In November 2013, CCA Texas Executive Board approved an additional $800,000 in funding to bring CCA Texas's total commitment to $1,565,000 to this project. $1,300,000 was raised through the diligent efforts of volunteers throughout the state; CCA Texas secured $145,000 from private foundations and $100,000 through the CCA National Building Conservation Trust, and funded another $20,000 through the Babes on the Bay Tournament, held locally in Rockport. Aransas County's efforts have brought over $2,735,000 through savings from restructured bonds and CIAP monies secured while Texas GLO has contributed roughly $1,400,000 through the permitting and fundraising process. CCA Texas is a proud partner of this project and looks forward to the day when the water flows again.

"It is not often that there is an opportunity to reopen vital passes like these," said Robby Byers, CCA Texas executive director. "It has been a monumental fundraising campaign, but through the partnership of Texas Parks and Wildlife Department, Aransas County, General Land Office, CCA and so many generous supporters, the project will begin."

Texas Parks and Wildlife Department (TPWD) is another important partner in the project as well. During the 2013 legislative session, TPWD and the legislature earmarked $3,000,000 for the completion of the project. Without their support throughout the process of securing the permit and lastly financially, the effort to open this pass would still be ongoing.

"The Fish Pass at Cedar Bayou has long been a special and storied place for Texas' saltwater anglers and coastal enthusiasts. Re-opening the historic Fish Pass will undoubtedly provide additional high-quality recreational opportunities for Texas anglers to enjoy the bountiful outdoor resources for which this stretch of the coast is so well known," said Carter Smith, TPWD executive director. "Texas Parks and Wildlife Department is proud to be a partner with Aransas County, Coastal Conservation Association, and all the others who have worked so long to make this a reality."

"Opening a pass between the Gulf and bay is never easy, and raising the funds to complete it can be even more daunting," said Mark Ray, CCA Texas Chairman. "As the scope of the project and the associated costs have grown, every partner has stepped up to the plate again and again to ensure that we reach our goal. It is a great day for the Texas coast and the recreational anglers who enjoy our shared coastal resources."