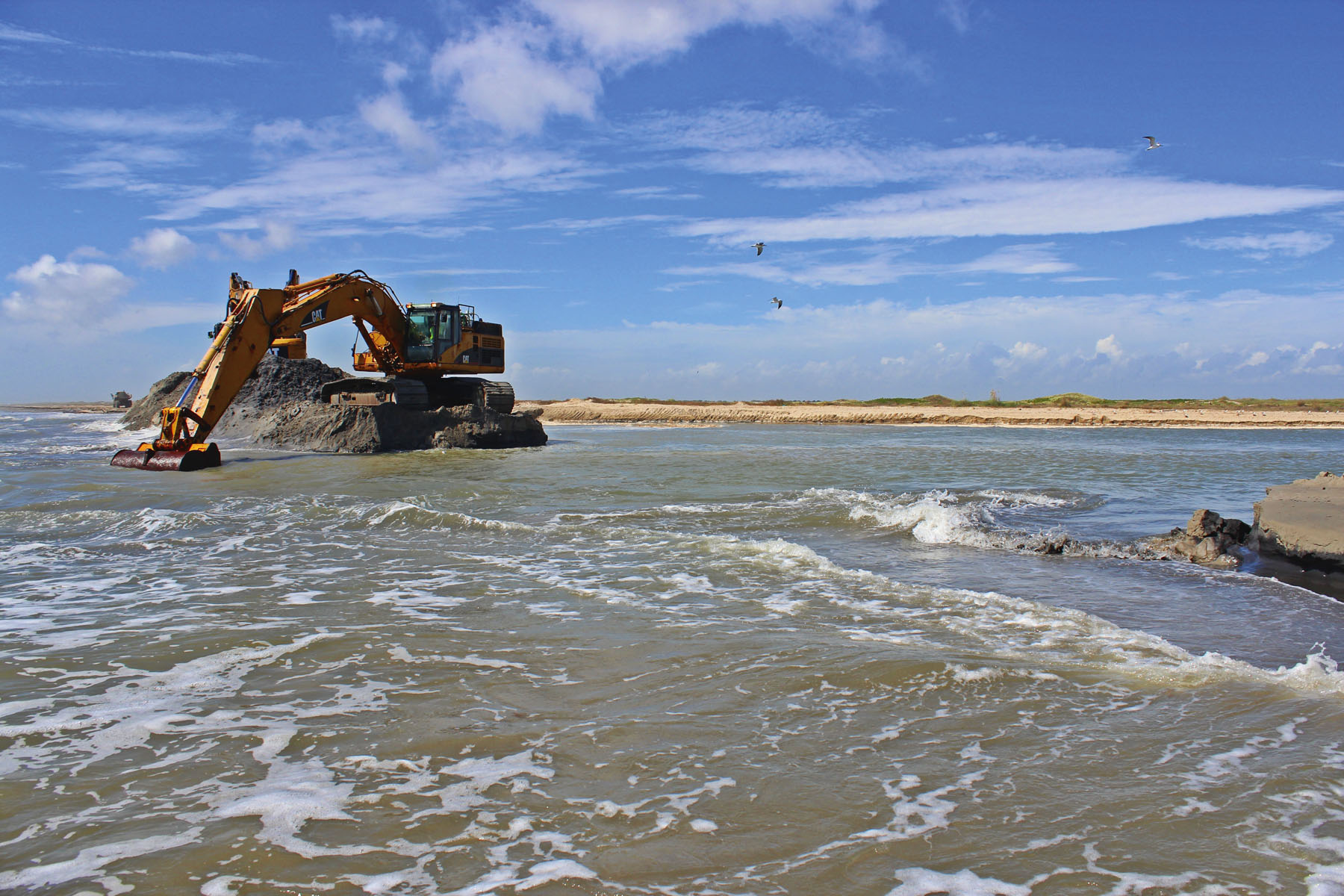 What a sight as the excavators worked in tandem to widen the breach. The strength of the current was amazing! Photo by Lisa Laskowski.
September 25, 2014 marked the day that fishermen across the state of Texas have been waiting for, for a long time. With approximately 100 local residents, dignitaries and CCA Texas volunteers on hand, Aransas County Judge, Burt Mills, took the controls of the track hoe excavator and dug the final scoop of sand that allowed Cedar Bayou to once again flow into the Gulf of Mexico.

"The middle Texas coast, and more specifically the Mesquite Bay complex, just underwent a successful 'double bypass' following the historic reopening of Cedar Bayou and Vinson Slough," commented CCA Texas Chairman Mark Ray. Mark commented further, "with dedication and closely coordinated effort between CCA Texas, Aransas County, state agencies and the Texas legislature, the essential arteries for water exchange and the highway for larval and adult fish migration are again flowing. This iconic natural resource of Texas coastal waters has been re-gifted to the fishing and naturalist public of Texas."

"CCA Texas was a great partner in our quest for getting Cedar Bayou opened," said Aransas County Judge Burt Mills. "All of our partners have done an outstanding job in working together to ensure the restoration of this pass."

Due to the Ixtoc Oil spill in the Bay of Campeche in 1979, state agencies made the decision to bulldoze the pass shut to prevent any oil from entering the ecosystems fed by Cedar Bayou and Vinson Slough. Prior to its closure in 1979, Cedar Bayou was open approximately 87% of the time. There were temporary and short term closures dating back to the early 1900s and dredging events in 1939 and 1959 but in general, Mother Nature kept the bayou open. After the 1979 closure, Cedar Bayou was never the same. With the exception of dredging events in 1987 and 1995, the bayou remained open for short periods of time. In 2003, Hurricane Claudette opened the bayou one last time, but only for a brief period.

The effort to open Cedar Bayou has been a long and dedicated effort by many since it was closed in 1979. Save Cedar Bayou, Inc. (SCBI) was formed in 1985 and struggled to make headway. In 2003, the Aransas County Cedar Bayou Advisory Committee was formed to take a look at the challenges and obstacles in restoring Cedar Bayou. The committee's report energized the community once again and SCBI renewed its efforts to see that the bayou was opened. Between 2006 and 2008, SCBI and the Texas General Land Office (TX GLO) spent $400,000 in efforts to study and create a plan for opening and maintaining Cedar Bayou. After continuous efforts to secure the U. S. Army Corps of Engineers (USACE) permit and to raise necessary funds the efforts began to stall and SCBI approached Aransas County to take over the permit process. In December of 2009, Aransas County accepted the request and the effort began to move forward once again under the leadership of County Judge Burt Mills. Aransas County worked hard to satisfy the permitting process of the USACE and moved through the process efficiently. On August 3, 2011, Judge Mills received and signed the USACE permit to move forward with the restoration of Cedar Bayou and Vinson Slough.

CCA Texas leadership maintained an interest in the restoration of Cedar Bayou as the permitting process proceeded and offered written support when needed. Once the USACE permit was secured by Aransas County, CCA Texas met with Aransas County leadership shortly afterward and offered to help in the effort to raise the necessary funds to make the project a reality. In February 2012, the CCA Texas State Board approved an initial commitment of $500,000 to jumpstart the fundraising process and the partnership began to accelerate its efforts. CCA Texas eventually committed $1,600,000 to the project through dollars raised by local chapters, secured from private donations and CCA National's Building Conservation Trust. Texas Parks and Wildlife committed $3,000,000, TX GLO approximately $1,400,000 and the balance of the $9,400,000 project was secured and guaranteed by Aransas County.

With the money in hand and a window of opportunity for construction nearing in 2014, the Notice to Bid was issued by Aransas County and in December 2013, RLB Contracting of Port Lavaca, TX was awarded the bid to restore Cedar Bayou and Vinson Slough. With a tight schedule and little room for error, RLB began its planning process and preparing for April 15, 2014 to start one of the most significant restoration efforts ever on the Texas coast in the eyes of many.

The surveying process started and with confirmation that the whooping cranes had migrated north for the summer, RLB began moving equipment in on April 15th. There were many challenges ahead for the workers and by mid-May, actual dredging and excavation had begun.

The first task was the removal of old dredge spoil sitting in Vinson Slough. As this was being completed, dredging in Cedar Bayou was underway and the excavators began the process of excavating materials within the template of Vinson Slough. On May 21, 2014, CCA Texas leadership and members of Aransas County Commissioners Court made a site visit and the project was moving full steam ahead.

Construction continued through the summer and the weather seemed to cooperate with the exception of a few weeks of high winds. The construction equipment took a beating, but RLB and their support crews stayed on top of things to ensure the timeline remained intact. By mid-August the connection between Cedar Bayou and Vinson Slough was made and the final dredging and excavation in Vinson continued. At this point, excavation for the final stretch of Cedar Bayou began. The end was near and the anticipation of completion began to grow for not only the residents of Aransas County and CCA Texas members but for the entire Texas fishing community.

"The opening of Cedar Bayou is a project that I have been working on for the past eight years. It has historically been an ephemeral channel, which means it has been intermittently open and closed depending on the weather conditions. Since sand was placed in Vinson Slough, the channel was unable to re-open during optimal weather conditions. This also caused a continual accumulation of windblown sand within the inlet's natural path," commented Coast & Harbor Project Engineer Matt Campbell. Campbell continued, "We realized early-on in our analysis how important it was to re-establish the connection with Vinson Slough, because it would help provide sufficient flushing within the inlet that is needed to maintain the hydraulic connection between the Gulf of Mexico and Mesquite Bay."

In the final month and a half of the project, the Cedar Bayou and Vinson Slough area began to come alive once again with baitfish, shorebirds and predator fish. Each trip to the job site was met with stories of increased fish and game activity in the area and the feeling that the goal was near. September 25, 2014 is a day that will be etched in the memory of many as the day that Mesquite, Aransas and surrounding bays and the area marshes came to life once again.

"Cedar Bayou is one of those great projects that have benefits on so many levels. Not only will it help the ecosystem in the surrounding bays, but will strengthen our fisheries, waterfowl and whooping cranes, while providing a world-class fishing destination for all Texas anglers to enjoy," CCA Texas Executive Director Robby Byers commented. Byers continued "This is truly a fantastic project for the Texas coast and CCA Texas looks forward to seeing the benefits it presents to the area ecosystem as well as the local communities and fishermen."