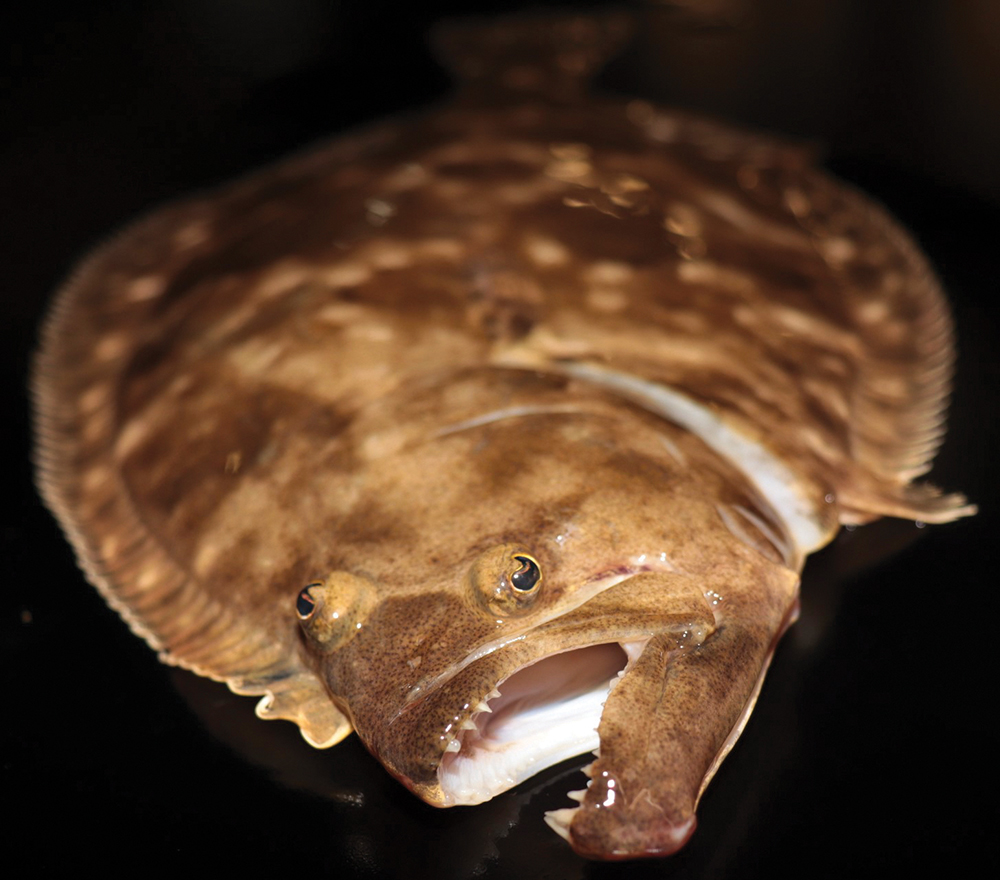 Hard to believe; early in life southern flounder undergo metamorphosis during which the eye on the right side moves to the left. (Shane Bonnot photo)

Southern flounder, Paralichthys lethostigma (meaning parallel fish that forgot its spots), are one of the more peculiar fish native to the Eastern and Gulf coasts of the United States. As juveniles and adults they can survive in bodies of water ranging from freshwater rivers and lakes to bays and offshore. That ability to tolerate varying salinities has allowed them to be widely distributed and highly abundant throughout our coastlines, particularly during seasonal spawning migrations. Their range begins in northern Mexico and extends all the way up through the Albemarle Sound in North Carolina, with a slight absence of presence around the tip of Florida. This wide distribution, coupled with their fighting ability and quality of flesh, make them one of the most prized catches among coastal anglers.

While they spend most of the year inshore feeding on invertebrates and smaller fish, the southern flounder migrate to offshore waters each year during the late fall and early winter to depths of over 100 feet to spawn (some flounder have been found at depths greater than 350 feet). After the eggs are fertilized in the water column, they float to the surface and, dependent on the water temperature, will hatch after an approximate 48-hour incubation period. A colder incubation temperature would equate to a longer incubation. After hatching, the larvae (measuring ~0.1 inches), will feed off their yolk sac for nearly a week, during which time the young fish develop their eyes located on opposite sides of the head. The fish will begin feeding on prey items after the mouth parts and digestive tract have formed, and for the most part, they look like “normal” fish larvae at this point of their life.

Over the next approximately 30-40 days (again, dependent on water temperature), something truly remarkable happens. Losing their aura of ordinary larval fish, southern flounder will undergo a metamorphic process in which the skull bones bend and shift positions as the right eye migrates to the left side of the head. During this process the fish will swim at a slight angle, and pigmentation on the left side (top side) of their body begins to develop. Once the right eye is in its final resting position, the fish settles onto the right side of its body and becomes a true flatfish for the remainder of its life (interestingly, a small percentage of southern flounder larvae undergo left eye migration, which makes one wonder if eye dominance plays a role in metamorphosis). It is just after metamorphosis when the flounder can tolerate variable water conditions, allowing them to thrive in bays and estuaries as they migrate from offshore.

Imagine the energy demand required and resultant stress for an eyeball to move across a head, shifting skull bones in the process. Everything has to be in sync to pull off that feat. Unfortunately for flounder there are factors outside of their control that highly influence successful metamorphosis. One of the most important abiotic factors that drives flounder development in offshore waters is temperature. In the Gulf of Mexico, young southern flounder larvae thrive at 62-65°F and can tolerate temperatures ranging from 59-73°F. After the flounder complete metamorphosis, that tolerance increases dramatically, but during the first few weeks of a flounder’s life it is absolutely critical that water temperatures remain stable in the upper 60s.

Fishery managers along the Gulf Coast, particularly in Texas at the lower end of the species distribution, have expressed concerns about the effects of warmer winters on the stock’s abundance. It takes two years for southern flounder to reach maturity, and due to their relatively short life span, only 4 to 5-year classes contribute to the spawning biomass. Historically, the stock has been able to recover from back to back warm winters but throw a third or fourth consecutive warm winter into the picture, you begin to have far-reaching implications on the fishery. The colder winter of 2018 provided the stock with a little respite after hitting all-time lows in juvenile recruitment in 2016 and 2017 (Figure 1).

Recruits from the 2018 class have now entered into the legal slot fishery and anglers across the coast are reporting that flounder stocks have recovered. While no one can deny that flounder fishing has improved this year, we need to look closely at where the data is trending.

The flounder fishery is primarily supported by age-1/age-2 fish, and current size restrictions ensure that harvested fish are at least age-1. Figure 2 clearly shows that we are witnessing a rapid and dramatic decline in these fish. Furthermore, the warm winter of 2019 has resulted in the fourth lowest year class recorded since 1982, meaning that we have very few flounder available to enter the slot fishery next year.

To put it plainly, the flounder fishery is in trouble. We have one successful year class supporting the bulk of the fishery and absorbing most of the harvest pressure.

Moving forward, fishery managers are going to be faced with difficult decisions on how to properly manage a mixed commercial and recreational southern flounder fishery that continually struggles to maintain status quo. The Texas Parks and Wildlife (TPW) Commission has acted in the past to increase the relative abundance of southern flounder and it appears that they will need to do more in the future.

In early November, TPW Coastal Fisheries staff briefed the TPW Commission on the status of southern flounder and discussed potential future management options, including further reductions in bag limits, boat limits, extension of seasonal closures, increases in slot size and other efforts to increase flounder abundance. Ultimately the population may shift away from the lower (and warmer) end of its geographic range if warming trends continue. Time (and temperature) will tell, but we remain optimistic that additional management efforts will help this fish rebound. In the meantime, let’s hope for another cold winter.