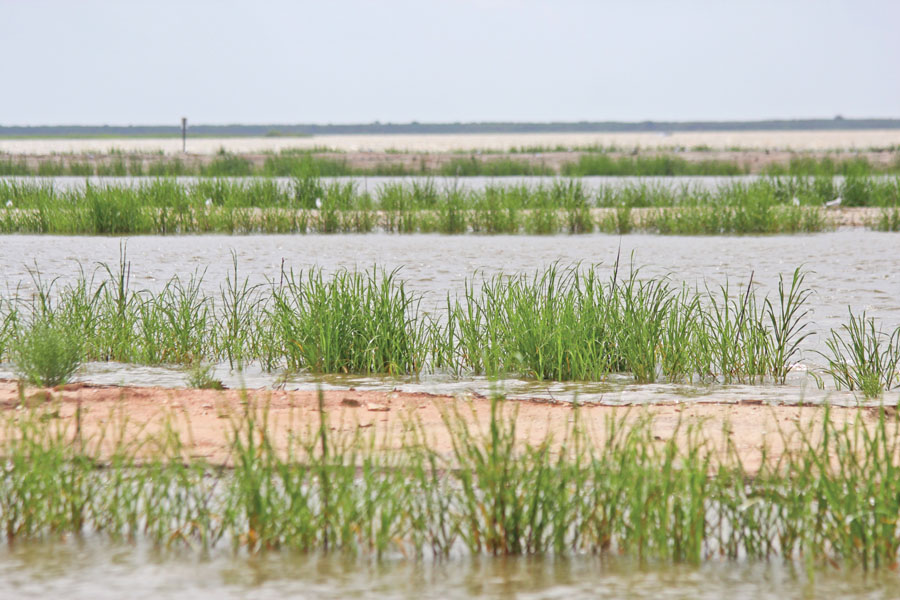 Cow Trap Lake is located within the San Bernard National Wildlife Refuge, approximately five miles west of the San Bernard River, on the north side of the Gulf Intracoastal Waterway. After decades of significant erosion caused primarily by wind-driven waves, United States Fish and Wildlife Service (USFWS) staff feared the loss of shoreline and degradation of the surrounding marsh along Cow Trap Lake's northern shoreline would continue unless some form of intervention might be applied.

In a joint effort between USFWS and Ducks Unlimited, twenty-one marsh terraces covering approximately 45 acres were constructed and will protect approximately 5,100 linear feet of shoreline from future erosion, as well as protect another 100 acres of existing, interior marsh from loss and degradation. The project was completed in the summer of 2014 and early indications are that the project is a success and cord grass plantings on the terraces are flourishing.

"Birds, fish, and many other coastal wildlife species will benefit from the Cow Trap Lake Project," said Greg Green, regional biologist with Ducks Unlimited. "Support from a diverse group of public, private, and other conservation interests are also represented in the Project. This shows the appreciation that exists for wildlife and the public users that enjoy them."

CCA Texas contributed $50,000 to this project and other funding partners included North American Wetlands Conservation Act, San Bernard National Wildlife Refuge, the U.S. Fish and Wildlife Service - Coastal Program, NOAA National Marine Fisheries Service, Phillips 66, NRG, and Houston Endowment. Partnerships are key to the success of projects such as this. Dollars contributed by CCA Texas are often used as matching dollars which can be matched 1:1, 2:1 or even higher by different grant programs administered at state and federal levels.

"Houston Endowment is pleased to have provided support to leverage the federal funds needed to restore the shoreline along Cow Trap Lake," shared Elizabeth Love, Program Officer at Houston Endowment. Love commented further, "We congratulate the project partners, and look forward to substantial and long-lasting ecological and recreational benefits."

The use of staggered marsh terraces in open water, as applied in this project, is a proven method for providing shoreline protection. The terraces reduce wave energy, erosion, and turbidity within the area and provided favorable conditions for emergent marsh vegetation to establish along the edges. To date, the emergent grasses are doing well and benefiting from a wet fall and winter of 2014 and spring of 2015. The calmer water conditions can also allow for improved growth of submerged aquatic plants, which are valuable to juvenile fisheries and wintering waterfowl. A submerged reef structure was also added for additional wave break and for providing and supporting marine organisms such as oysters. In addition, this submerged reef structure will also help restore sub-tidal habitat in the area.

The twenty-one terraces were constructed using excavated materials adjacent to the placement area. The terraces were shaped in "S" patterns to serve as wave breaks and to protect the adjacent shoreline. The NRG-Eco Center Nursery in Baytown, Texas provided 25,000 bare root plugs of smooth cordgrass, Spartina alterniflora, at no cost for planting along the fringing edges. NRG's participation in this project as well many others along the Texas coast is invaluable in the ongoing efforts to protect and restore coastal shorelines and marsh in Texas. CCA Texas recognizes NRG's efforts and thanks them for their continued support of conservation projects along the Texas coast.

The artificial reef structure was constructed between the two large terraces in open water. More than 900 cubic yards of crushed stone material was placed at the site and resulted in almost two acres of sub-tidal and submerged habitat. The reef structure is approximately 2,000 feet in length, 25 to 40 feet wide at the base, and up to 12 inches tall. This type of structure and bottom relief offers excellent habitat for many species and provides wave-breaking structure as well. Additional crushed stone was also placed at the lakeside of the outer terraces to provide shoreline protection and additional sub-tidal habitat.

"As a recreational angler, I see this project as a great benefit to Cow Trap Lake. Not only does it protect the eroding shorelines, but it provides for more fish habitat and areas to target fish," said Dan Johnson, CCA Texas Brazoria County member and chapter volunteer. Dan continued, "This project offers new habitat for shorebirds and other species and will protect important shoreline grasses along the northern shores."CCA Texas and its habitat initiative, Habitat Today for Fish Tomorrow (HTFT), are proud to support projects that continue to restore and protect Texas's coastal habitat. Since HTFT's inception in 2009, CCA Texas has been involved in twenty-five (25) habitat projects and contributed $3,981,600 dollars to these habitat restoration and creation efforts. For more information about CCA Texas and the organization's efforts, be sure to visit www. ccatexas.org.