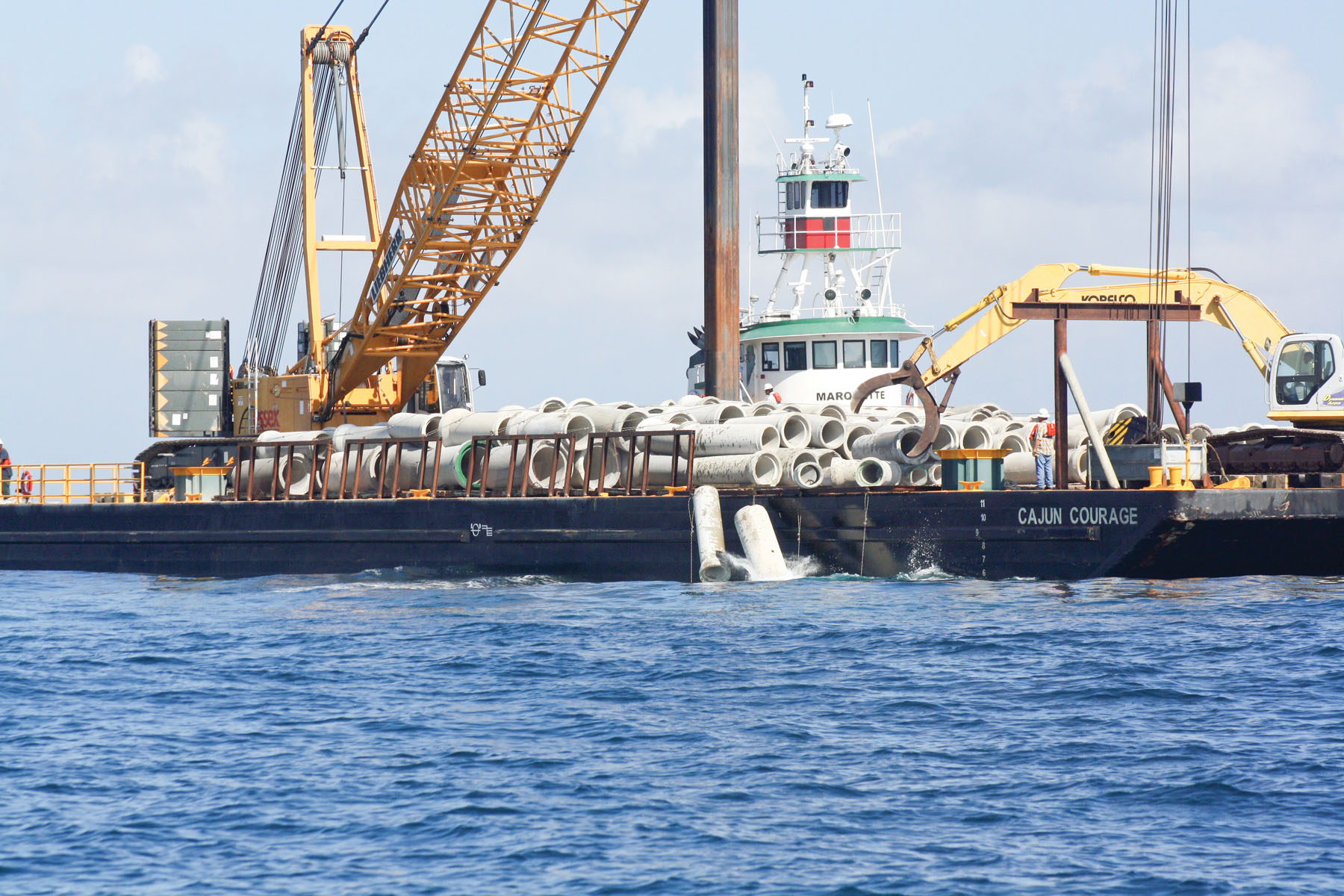 Cast concrete pipe placement during construction of nearshore reefing project—Port Mansfield. Photo by Lisa Laskowski.
CCA Texas is grateful to have the opportunity to provide monthly articles for Texas Saltwater Fishing magazine. Generally articles are provided that describe habitat restoration and creation work CCA Texas is involved in. TSFM has many new readers each month and this month is a good month to let all the new readers know how CCA Texas gets involved in habitat work through its habitat initiative, Habitat Today for Fish Tomorrow.

Habitat Today for Fish Tomorrow (HTFT) is the habitat initiative of Coastal Conservation Association Texas (CCA Texas). CCA Texas began in 1977 and made its mark on fisheries conservation through the legislative process in Texas. Some of the big early victories included championing the establishment of size and bag limits on speckled trout and redfish, game fish status for these species, and making the use of gill nets in Texas state waters illegal. CCA continued with many success stories throughout the years including a leading role in establishing saltwater hatcheries in both Corpus Christi (CCA Marine Development Center) and in Lake Jackson (Sea Center Texas). As the organization grew and with fisheries management at a strong point, CCA Texas leadership began to explore where CCA Texas could once again take its conservation efforts to another level. In November of 2009, the CCA Texas Executive Board approved an initial funding of $200,000 to start a new habitat initiative, which came to be known as Habitat Today for Fish Tomorrow.

Since its inception in 2009, HTFT has been a part of twenty-four projects and contributed approximately $3.9 million to these habitat restoration and creation efforts. CCA Texas takes part in these efforts by using its strength in fundraising to provide critical dollars to selected projects. These dollars often times provide much needed local funds for matching in state and federal grants. In addition, CCA Texas is able to use its lobbying power to gather support for projects when needed in the political arena. It also provides local help and support through a vast volunteer network. Once completed, CCA Texas can provide critical outreach and education about them to its vast membership base through the many publications that provide space for the organization to educate the general public about the importance of coastal conservation for present and future generations. Volunteers are the driving force of the organization and without their efforts CCA Texas could not accomplish the important work that it does.

"Habitat projects do so much for a local volunteer and it is like connecting the dots," commented Mike Petit, longtime CCA Texas member and CCA Texas Executive Board member. Petit continued, "it is really gratifying as a local volunteer to see where the money goes that local chapters raise and to see that it is making an impact on a local bay system."HTFT has taken part in many different types of habitat projects that have ranged in monetary value from $10,000 to $10,000,000. These projects include marsh restoration and creation, shoreline stabilization, grass plantings, oyster reef restoration, nearshore Gulf reefing projects, bay debris cleanup, and in the restoration of hydraulic connections between the Gulf of Mexico and inland bays. Partnerships are key to successful projects and CCA Texas has worked with many partners. Some of past project partners of CCA Texas include Texas Parks and Wildlife Department (TPWD), Coastal Bend Bays and Estuaries Program (CBBEP), Galveston Bay Foundation (GBF), Texas A&M Corpus Christi and the Harte Research Institute (HRI), Ducks Unlimited, and the San Antonio Bay Foundation.

Three of HTFT's biggest contributions to habitat restoration and creation in Texas have been oyster reef restoration, nearshore Gulf reefing in Texas state waters and the opening of Cedar Bayou and Vinson Slough to the Gulf of Mexico in the Mesquite Bay area. Partnering with TPWD, CCA Texas was part of an oyster restoration project in East Galveston Bay that restored 180 acres of oyster reef that was silted over by Hurricane Ike. CCA Texas contributed $500,000 to this project that had an overall cost of $3.9 million. CCA Texas partnered with TPWD in the CIAP grant process to secure $3.4 million and the project was completed in the late spring of 2014. CCA has partnered with HRI on two smaller oyster restoration projects and places these type of projects high on the list of habitat needs for Texas bays.

Nearshore reefing in Texas state waters has been a big part of HTFT's efforts as well. To date, CCA Texas has partnered with TPWD on five different projects with a total commitment of $700,000. These projects include reefs out of the ports of Freeport, Port O'Connor, Corpus Christi, and Port Mansfield. CCA Texas's vision is to see nearshore reefing projects out of every port in Texas that gives the recreational fisherman easily accessible nearshore fishing when conditions and the season regulations allow.

Perhaps the biggest effort to date for habitat restoration is the Cedar Bayou and Vinson Slough restoration project. This project was completed after many years of studies, engineering, a laborious permitting process and lastly, a huge effort to raise the necessary funds. Cedar Bayou and Vinson Slough were bulldozed closed during the IXTOC oil spill in the Bay of Campeche in 1979 in order to protect the area bays from the approaching oil. Since that time multiple efforts had been made to open the passes but fell short in funds and engineering. When Aransas County took over the project from private individuals, a permit was finally secured and CCA Texas then stepped forward with an original commitment of $500,000 to start the fund raising campaign needed. Through different grants, and commitments from Aransas County and TPWD, the necessary funds were raised. CCA Texas eventually committed $1.6 million to the project, and at the end of September 2014, the dream of many recreational fishermen became a reality as Cedar Bayou and Vinson Slough freely flowed to the Gulf of Mexico once again.

CCA Texas is committed to ensuring the health of Texas's coastal resources through habitat creation and restoration, and also through legislative efforts. The cornerstone to this success is the support of CCA Texas volunteers and supporters across the state that raise the necessary funds and awareness that allow these projects to become reality. For more information about CCA Texas and its efforts, please visit www.CCATexas.org.