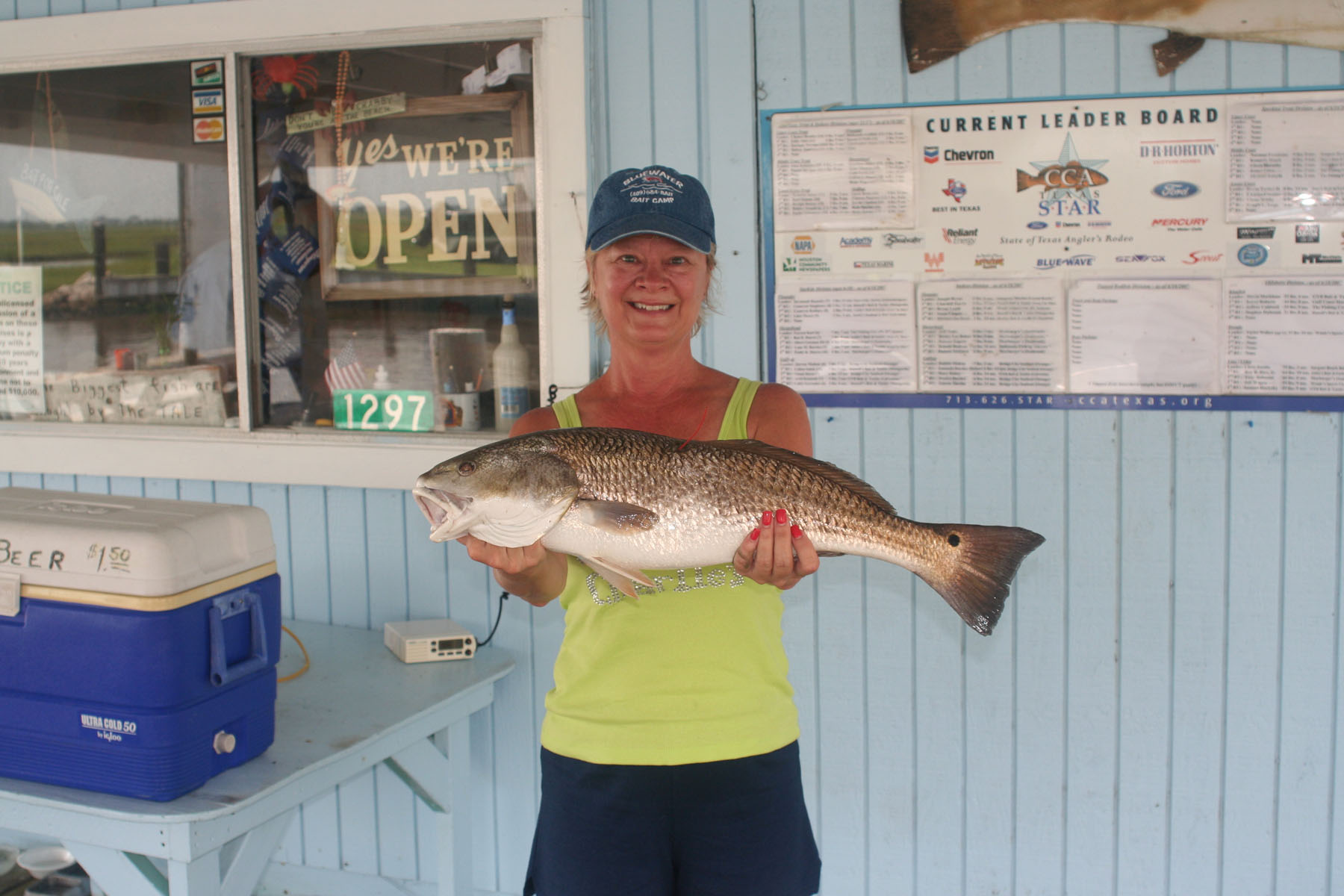 For Crystal Beach resident, Deborah Alston, "Luck Be a Lady", or in this case a tagged redfish for a lucky lady angler. And guess what, it happened on the luckiest day of the year, July 7, 2007 (7-7-07) how appropriate! Here's her story.

I grew up fishing Crystal Beach with my dad. East Bay and the Dirty Pelican pier were our favorite places. My husband and I would borrow his dad's aluminum boat (no motor) and paddle out past the surf to fish until we purchased our first boat. Now I have the good fortune to live on a canal and can fish at my home.

I have been in the STAR Tournament for a few years now and every time I fish I think maybe today I'll catch a tagged redfish. My husband teases me about fishing so much and always talking about catching a tagged red. But I tell him that you can't catch a tagged redfish unless you fish. Fishing is my sport and my time to relax and enjoy being outdoors.

Saturday morning, I fished for a couple hours and then went in to clean house and do other chores. When I finished my work I decided to try my luck again. I had just baited my hook with a shrimp and cast the line when my daughter called. I sat in my chair at the bulkhead and told her I would have to let her go if I caught a fish. With my rod in one hand and the phone in the other, I got a hard bite and hooked what I could tell was a big fish. I quickly said "Jess I have a big fish, I have to let you go." I think I hung up before she could say good-bye, but she's used to her mom fishing and I know she didn't take it personally.

The fish made several good runs and rolled a couple times, I couldn't help but wonder if it might be a tagged redfish. I was by myself and knew I would need somebody to help with the net. I began calling out for my next door neighbor but no one was outside. I kept calling and finally Tina McGee from across the canal called back.

I continued to work with my fish. As it got close to the bulkhead, it turned on its side and revealed a red tag. I've always wondered what the STAR tags look like and where they place them. There was no mistake, this fish had a tag. I could not believe it. I continued to call out trying to get somebody's attention when I saw my neighbor, Mike Didio, across the street. I finally got his attention and he began walking toward me. I kept telling him to hurry and he shouted out, "I'm coming Deborah, what is it?" When I told him I had a tagged red he began moving very quickly and just then Tina drove up. With Mike's help on the net I successfully landed the fish.

I was so excited, but when we looked at the tag it was covered in algae. Mike was afraid it was an old tag from a previous tournament year. We placed the fish in the cooler and headed immediately to Stingaree Marina. Brad and Jim Vratis looked at it and removed the algae to reveal Tag #T730, the CCA tag for this year! I began to jump up and down and I am still floating around in disbelief!

As of mid-July, we've had reports of seven tagged redfish caught and so far Deborah Alston is the only confirmed winner. She will receive a 2007 Ford F-150 "Texas Edition" truck with a 22-foot Blue Wave 220 Super Tunnel boat during the STAR Awards Ceremony on Oct. 4, 2007. Fifty-three tagged redfish are still out there swimming around just waiting to be caught and plenty of prizes are still up for grabs. WOULD SOMEBODY CATCH ONE, PLEASE?!!!

Four Ford truck/Blue Wave boat/Mercury motor combos and five Blue Wave boat/Mercury motor combos hang in the balance. Don't end up like the other unlucky anglers who caught tagged redfish and instead of enjoying a new truck and boat had some very expensive filets! Don't let this happen to you! There is still time to enter. The "largest, richest, longest saltwater tournament anywhere", so the media says, continues until 5p.m. on Monday, Sept. 3 (Labor Day). Anglers have the whole month of August, plus three days in September to try their shot at way over a $1,000,000 in prizes in Texas' largest, richest, summer-long, saltwater fishing event. Get everyone signed up for the 2007 STAR.