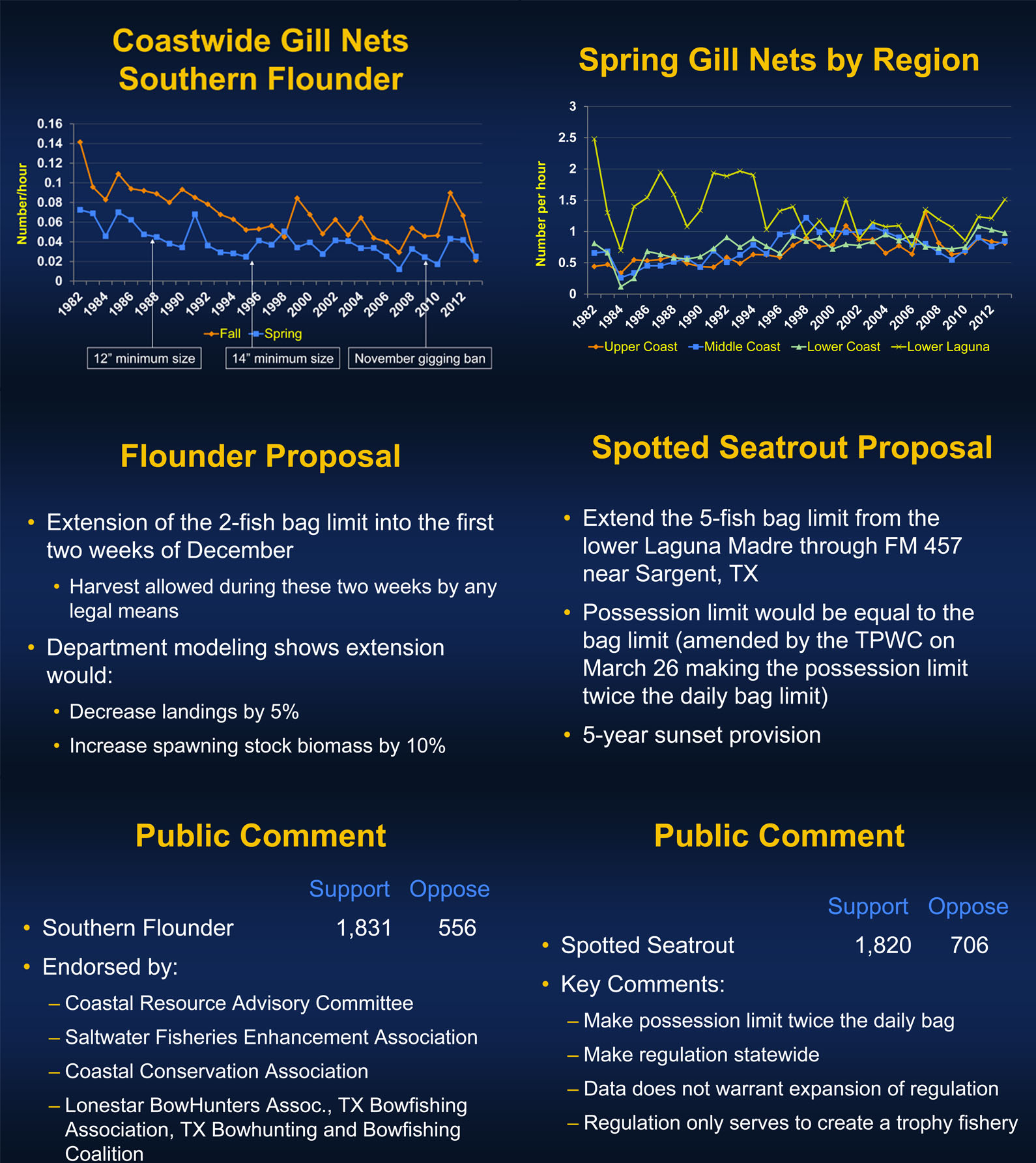 The greatest challenge for resource managers lies in the crafting of regulations beneficial to the resource while simultaneously pleasing user groups. As the old saying goes, "You can't please all of the people all of the time."

On March 27, 2014 the TPW Commission took a major step that many coastal fishermen believe will greatly improve the quality of fishing for southern flounder coast-wide and spotted seatrout in middle-coast bays and Upper Laguna Madre/Baffin region.

Southern flounder have been steadily declining along the Gulf coast since the 1980s. Here in Texas a series of regulatory changes for recreational as well as commercial fishing from the 90s through 2008 accomplished little, a puzzling situation indeed. In that same era bay shrimping regulations were tightened to reduce the impact of bycatch mortality on flounder stocks and shrimping effort succumbed greatly to economic factors that make it virtually unprofitable.

But as all this was happening the flatfish continued their downhill slide. The root cause came eventually to light when marine scientists seeking to discover whether various species of flatfish could be spawned and reared in captivity unraveled a secret of the natural world.

To simplify; southern flounder spawn in nearshore Gulf waters and spawning success is highly dependent upon water temperature. Too warm or cold reduces hatch rates and the ones that do hatch tend to develop into mostly male fish. A string of twenty-odd mild winters and above average seawater temperatures, it turns out, was endangering the sustainability of the stock beyond any ability of man.

But man can help. In 2009 the TPW commission enacted regulation to protect flounder during their spawning migration, primarily in November, based on the theory that we needed to lay off the spawners and let them to do their thing. Landings records show that fully 30% of the annual harvest is made during November. The special regs allowed rod and reel anglers only two fish per day and gig fishing was banned during the month.

After four years TPW Coastal Fisheries Division says flounder numbers have increased 180%, a healthy increase. But they also said we could accomplish even more. Thus, by unanimous commission vote, effective September 1, 2014, the November rules are being extended into the first two weeks of December because the "run" often lasts more than just one month. And the commission included a caveat for giggers in the extension.

Rod and reel fishermen have been able to participate in the November fishery via the two-fish daily limit since originally enacted and the same will apply during the December extension. In addition, gigging will also be allowed during the first two weeks of December bag limit two fish per day. TPW's anticipated improvement to the fishery can be seen in the accompanying slides.

Speckled trout have been in the regulatory spotlight several times in recent years and many veteran middle-coast anglers who target them religiously are of the opinion that trout fishing (generally) over the past several years is about as poor as they can recall.

TPW considered reducing speckled trout bag limits back in 2010-11 regulatory cycle, given that their gill net surveys of two year and older fish had been sagging for more than a decade.

At that time though, Coastal Fisheries was also reporting record-breaking young of the year fingerling numbers in nearly every bay in the region. I remember very clearly in February 2011 when Coastal Fisheries science director, Mark Fisher, said, "We need to see this year-class recruited into the fishery before we can ask the commission to consider regulatory changes."

But the tide never turned for specks. Even though unprecedented in number, that year-class of fingerlings was evidently not enough to put plentiful trout at the end of angler's lines.

True to their promise though, the Coastal Fisheries Division never took their eye off the ball. The present initiative to revise middle-coast regs is said to have originated within the commission itself and Coastal Fisheries science supports it better.

The voice of fishermen has also been heardkudos to TPW for asking and listening. During all previous endeavors to quantify public opinion for more conservative trout regulationsdating back to 2002there has always been considerable public rejection of the idea. But times change. Who would have ever believed such a groundswell of support this go-round?

On March 27, the commission adopted new regulations that will take effect this September, limiting Texas anglers to five speckled trout daily from the southern end of the Land Cut, extending northward through all coastal waters to the FM 457 bridge near Sargent. The commission also set possession limit for specks equal to two days bag limit across the entire Texas coast. Establishing a common possession limit for all waters, including the Lower Laguna Madre where it has been equal to only one day's bag limit, is another good move in my opinion.

Personally, I believe that revising the speckled trout limit on the middle-coast to mirror the successful management plan TPW placed in the Lower Laguna back in 2007 will prove highly beneficial for this fishery.

Texas has great fisheries and a rich history of leadership in fisheries management. I want to thank the TPW Commission and Coastal Fisheries Division for their work in this and also for their efforts to keep the public informed of the status of our fisheries and in making tough, proactive choices to insure that future generations will enjoy fishing as we have been so fortunate.

CCA Texas also deserves great recognition for continued leadership in conservation and support of TPW. The current 64,000 general membership, and CCA's State Board of Directors in a nearly unanimous vote, rallied to stand with TPW in support of these proposals for regulatory change. This makes me very proud to say I am life member of the organization.

If we are to call ourselves sportsmen, we should always be willing to put the resource first. Join the effort in limiting how many we take and watch these two important and treasured fisheries thrive.