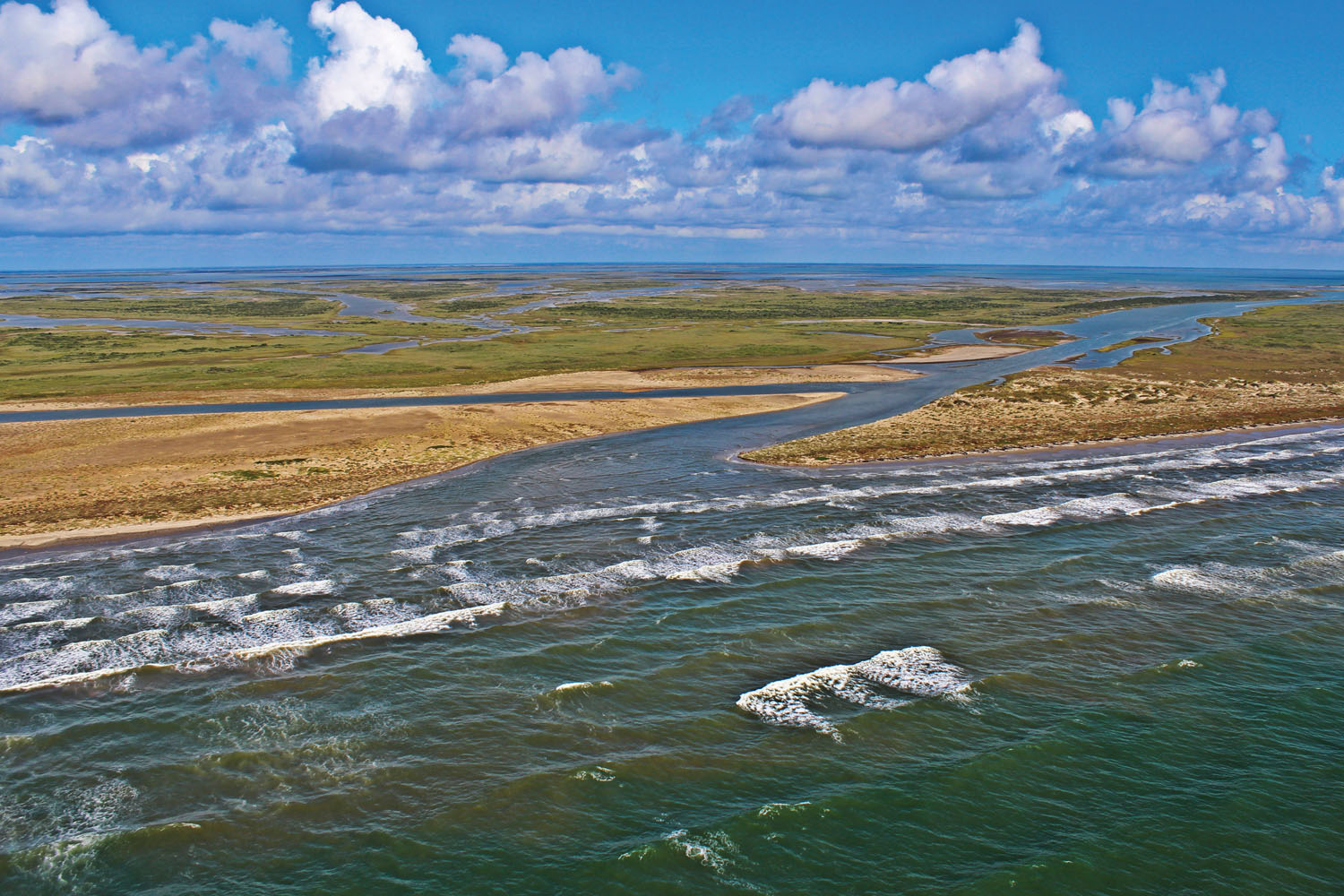 An aerial view of Cedar Bayou from the Gulf of Mexico. The almost straight-line access that Cedar Bayou provides to Mesquite Bay is clearly visible from this vantage point.

In the nearly two years since being reopened, Cedar Bayou has reclaimed its hallowed reputation in hearts of Coastal Bend anglers. Research findings from the Harte Research Institute's Center for Sportfish Science and Conservation are definitively showing that the inlet is once again serving as an aquatic highway, allowing the exchange of organisms between the Gulf of Mexico and the once-isolated Mesquite Bay.

Reestablishing this vital gulf-to-bay link allows millions of tiny young estuarine-dependent sportfish and crustaceans a doorway to nursery waters from offshore spawning grounds. Access to these estuarine habitats is critical for sustaining and building healthy sportfish populations and a robust ecosystem. Not to mention, the flowing bayou has restored stellar fishing opportunities for inshore anglers.

Fry of key sportfish species, particularly redfish, have responded vigorously to a flowing Cedar Bayou. This is exciting given that these quarter-inch-long redfish were completely absent during two years of sampling effort prior to the reopening. Within weeks of Cedar Bayou being opened, hundreds of fry were found at our sampling sites.

During the second year of post-opening study, redfish densities increased substantially. The numbers of redfish fry Mesquite Bay is now sheltering are some of the highest we have observed anywhere along the middle Texas coast. Given that many young sportfish, including redfish, have higher survival rates once they reach seagrass nurseries, the delivery role Cedar Bayou now plays could potentially create a new source population of redfish in the Mesquite Bay region. This is fantastic news given that this area is well-known for its outstanding fishing.

While sportfishing reigns supreme, the basis for any healthy gamefish population is an abundant forage base. Texas' iconic inshore predatory sportfish rely heavily on blue crabs, croaker, and shrimp for prey. The data we have collected over the past four years (2 years pre- and 2 years post-opening) has shown a significant increase in the number of prey species making their way into Mesquite Bay's nurseries since Cedar Bayou was reopened.

To be more specific – we found nearly 8-times as many croaker fry, 16-times as many juvenile blue crabs, and 25-times as many post-larval penaeid (brown, white, and pink) shrimp since Cedar Bayou was reopened!

It is important to keep in mind that most of these animals are smaller than your pinky nail when sampled, and use the plentiful habitat to support their populations. These staggering increases in young prey species will almost certainly provide more sportfish fodder in Mesquite Bay than what was available before Cedar Bayou was restored. The fact that these higher productivity trends are continuing into the second year post-opening is perhaps the most encouraging aspect of this project.

Star drum fry and young clupeids (mainly Gulf menhaden) are now present in Mesquite Bay and occur in large numbers during certain times of the year. Overall, blue crabs, post-larval penaeid shrimp, and pinfish were the main drivers of this community change and their increased abundance can be directly attributed to Cedar Bayou.

From a broader impacts perspective, this increase in crustaceans, particularly blue crabs, will almost certainly be an important prey-base for the endangered whooping cranes that forage in this area during their winter stay. We predict that as time progresses this community will continue to stabilize and strengthen through the diversity delivered by Cedar Bayou, thus creating a sustainable and highly productive marine community in Mesquite Bay.

We often compare Cedar Bayou to an aquatic highway and, just like a highway across land the traffic moves both ways. While fry use inlets to move into bays after hatching offshore, adults of many species require inlets to move out into open water to join on the spawning grounds. Some, such as redfish, leave to never return, while flounder leave in the fall and return during spring. Certainly gulf-access during these migration events is key.

To better understand these migration patterns, one of our main objectives during this project was to use acoustic telemetry to examine how adult organisms use Cedar Bayou. Briefly, acoustic telemetry involves surgically implanting a small sound-producing transmitter into a fish. Once tagged, each fish emits a unique code at a certain frequency that is picked up by a series of receivers, allowing scientists to track the movements of individual fish with a great deal of accuracy.

Given their hardy reputation we decided to implant adult redfish with acoustic tags capable of transmitting for two years. In the year prior to opening, when no flow was occurring, there was not a single detection within Cedar Bayou and most of the fish stayed near their original tagging locations in Mesquite Bay. This sedentary lifestyle continued even after the inlet was reopened, that is until the fall of 2014. During a ten day period in mid-October however, we began detecting extensive activity in Cedar Bayou as cooling weather patterns and shorter days triggered the annual migration event.

Given that most of these fish moved offshore and did not return, we are confident in saying that the implanted redfish used Cedar Bayou as a migration route to offshore spawning grounds within months of it being reopened. The information we gained from our acoustic study with redfish has prompted us to investigate how spotted seatrout use Cedar Bayou. This project is underway with 25 transmitter-implanted trout that will help scientists at the Sportfish Center uncover some of the migration patterns for this popular sportfish.

The opening of Cedar Bayou and its associated benefits are the direct result of years of hard work. Aransas County Commissioners, Coastal Conservation Association, and untold numbers of private citizens managed to bring this natural treasure back from the brink of obscurity and destruction. Allowing the inlet to naturally meander and reassume previous courses has been a quite remarkable process to watch.

You can help to ensure a lasting impact as well. By minimizing wake erosion causing an accumulation of sediment in the channel, Cedar Bayou will retain its natural ability to wander and remain open. With smart boating practices Cedar Bayou will continue to evolve, providing visitors with an ever-changing and unique experience every trip.

Restoring this inlet has given Mesquite Bay's extensive seagrass nurseries massive potential as "Mother Nature's Hatcheries" for a variety of species. This "shot in the arm" to the region's ecology is now ensuring a steady seasonal supply of young organisms to these nursery areas that provide plentiful food supplies for rapid growth and structured habitat (seagrasses, marsh, and oyster reef) to escape predators.

The future will reveal the full impact of restoring Cedar Bayou, but so far the inlet's positive influence on the Mesquite Bay ecosystem is quite amazing. If you haven't visited Cedar Bayou, it should be high on your list. Not only is observing nature in this remote undeveloped barrier island region spectacular, the fishing is just as great.

Dr. Greg Stunz is the Director of the Center for Sportfish Science and Conservation, as well as the Endowed Chair of Fisheries and Ocean Health at the Harte Research Institute. The Center focuses on habitat requirements of marine life using a variety of state-of-the-art equipment including tracking devices for sharks, red snapper, and dolphin-fish. The center also oversees a number of projects directed at understanding the importance of tidal inlets on sportfish populations. The CSSC team aims to provide scientific data for sustainable management of marine fisheries and ocean resources to ensure healthy sportfish populations. Check out this project and videos of Cedar Bayou at: www.sportfishreserach.org