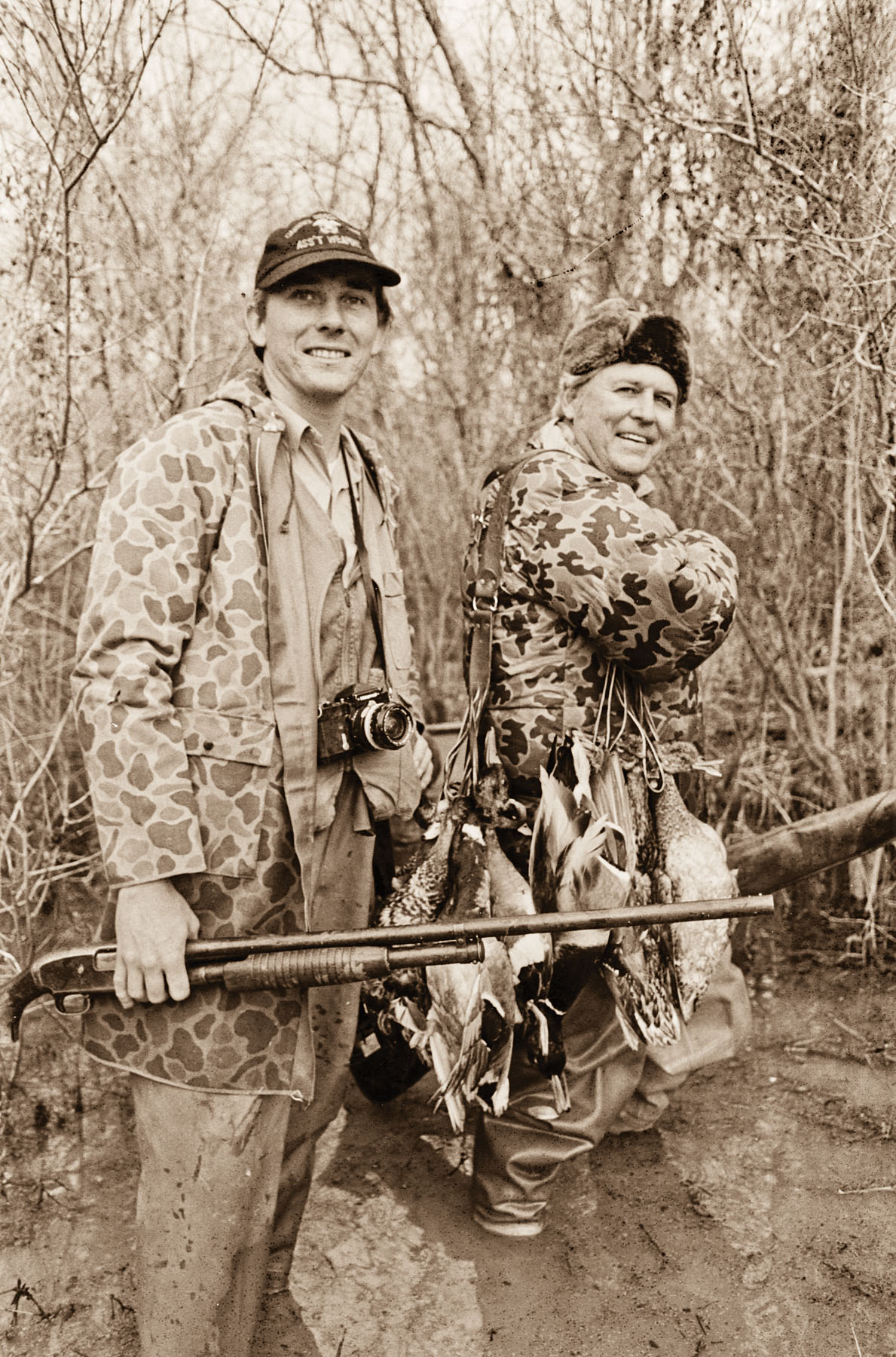 Editor's note: This is the first in a series of features from Joe Doggett detailing significant contributions to the outdoor experience. I hope you find these works as entertaining and informative as I have. -E. Johnson

Most serious anglers and hunters were, at some stage, influenced by outdoor communicators. The impact by these specialized media celebrities on the traditional "hook and bullet" culture is significant - perhaps more so than many participants might realize.

The outdoor communicators are entertainers and instructors but, most important, they stoke the fire of being "out there." And, unlike many reporters, the outdoor writers and television show hosts are hands-on professionals.

At least, they should be. Imposters quickly lack credibility among a dedicated audience. An outsider, no matter how skilled with keyboard or camera, doesn't last long. The outdoor communicators that endure, the real pros, gain considerable respect and following.

Outdoor writing, especially, has an impressive legacy in the English language. To say the least. The first book dedicated to sport fishing and written by a "fisher-man" was The Compleat Angler, penned by Izaak Walton in 1653.

Now, if you care to include the first fishing book by a "fisher-woman," back it up to 1496, when Dame Juliana Berners wrote Fysshlynge Wyth An Angle in the Boke of Saint Albans.

There's nothing new about this. Outdoor communicators have influenced generations, nay, centuries of enthusiasts.

When I was a kid growing up in urban Houston during the 1950s and early 1960s, the "Big Three" outdoor magazines defined the world of fishing and hunting. The Big Three were Field & Stream, Outdoor Life, and Sports Afield.

Frankly, these monthly publications have nowhere near the impact now as then. They're OK, nothing exceptional amid a myriad of solid choices. Concepts have changed, with dozens of regional and specialized outdoor magazines, not to mention fishing/hunting television shows and websites.

But, 50 years ago, the Big Three dominated in a way that never will be seen again. Each magazine had a distinct personality - take your pick, or religiously read all three. As I did.

F&S had the strongest stable of staff writers and Outdoor Life had the best photo layouts. Sport Afield was sort of in-between. And all were profusely illustrated by top sporting artists, beautiful paintings depicting specific stories and, often, the magazine covers. The arrival each month of the new and colorful editions was a major event for a junior-high kid stuck in the city.

The magazine writers were my mentors. They filled my simple surroundings with adventure, expertise and beauty. It's enough to say that I still have boxes and shelves of vintage issues of the Big Three, and still enjoy thumbing through a dog-eared stack now and then.

Those guys were really good. A.J. MClane, Joe Brooks, and Lee Wulff were the American Masters that opened the world of angling. They were like movie stars with fishing rods. But many others provided classic outdoor writing. F&S had Robert Ruark, Ted Trueblood, Ed Zern, and Warren Page writing monthly columns. Sports Afield had the crusty old bass expert, Jason Lucas, and Outdoor Life had the great rifleman, Jack O'Connor.

A proven lineup of "freelance writers" (published regularly in all three) enriched the mix: Among the best were Erwin A. Bauer, Byron Dalrymple, and Tom McNally. They were in such demand they used pen names when doubling up in single issues. Bauer went by "Ken Bourbon" and Dalrymple doubled under "Christopher Michaels."

I'm leaving out many A-List writers of the era, but these were the ones that consistently resonated with me.

You don't feel bogged down with facts but, at the end of an entertaining adventure, you realize, Jeez, I really learned something there.

That's what these guys did for me month after month. I was an only child and my father and mother didn't fish or hunt. They were great parents, kind and tolerant. They didn't discourage my outdoor obsessions; they just didn't know anything about them.

And most of my junior-high friends were inept. Frankly, I was better than most because I absorbed the magazines with obsessive fervor. I could tell you all about how to flush ruffed grouse behind a spaniel in New England, or troll for black marlin in the deep currents off Cabo Blanco, Peru - not to mention how to rig a Nick Creme plastic worm for bass in Houston's Hermann Park lake.

The one exception was a school friend whose affluent and understanding dad was an avid fisherman and hunter. They had a boat and a farm and a hunting lease and I thought he was the luckiest kid in the world. He remains one of my oldest outdoor companions and I still envy his upbringing.

I mucked around the urban ponds and bayous and turned to the Big Three, to the writers I held in highest regard. The prospects of getting 12 or 15 great articles between the three issues in a given month was a mind-boggling prospect - better even than a new Uncle Scrooge or Superman comic book.

The Big Three influenced many sportsmen, young and old, during the 1950s and 1960s. Frankly, they didn't have much competition. Certainly, many specialized fishing and hunting books were available (too many to attempt to detail here), but not much outdoor-wise was showing on the scratchy, grainy televisions.

I recall one good fishing show, "The Flying Fisherman," starring an old geezer named Gadabout Gaddis. He would fly his single-engine light plane each week to various freshwater and saltwater destinations around the country.

I recall at age 13 or 14 being shocked at how elderly Gadabout Gaddis seemed; it's even more alarming to acknowledge that I'm probably 10 or 15 years older now than he was then.

But the concept of his "surgical strike" aerial approach was great, way ahead of its time, and I was mesmerized. The old gaffer zipped around and caught quite a few fish. If memory serves, the 30-minute show aired on Sunday afternoons.

ABC's American Sportsman was a big success during the mid-1960s. Host Curt Gowdy was a serious outdoorsman (as well as a big-name sports commentator) and hosted various celebrities on fishing and hunting trips. Many were high-budget expeditions to exotic locales, fabulous adventures.

The network eventually gutted the original fishing/hunting format (no doubt pressured by strident ranks of "anti's") and ruined the show but, for several years, it was a major window to the traditional outdoor experience.

And, in Texas, a guy named Jim Thomas had a successful run during the early 1960s with "The Lone Star Sportsman." I believe he was from San Antonio. The 30-minute weekly show was sponsored by Lone Star Brewery. I feel safe in saying it was the first successful fishing/hunting television show in this region.

It was a bit rough compared to the smooth editing and filming of the star-studded American Sportsman, but Thomas was a legitimate Texas player and had a faithful audience. I still recall his sign-off: "Remember, enjoy the great outdoors but don't leave your good manners at home."

If that's not word-for-word, it's extremely close. The fact that I remember at all conveys the significance of the show. And, no doubt as a tribute to sly marketing, I gained a fondness for Lone Star longnecks - perhaps sooner than I should have.

But, for the most part, the written word carried the torch through the 1950s and 1960s. Most of the quality local coverage was provided by outdoor writers for the major daily newspapers. The only regional magazines with any staying power (as I recall) were Southern Outdoors and Texas Parks and Wildlife Magazine.

It was written in 1946 by Hart Stilwell. He was an excellent wordsmith, a joy to read, and well-versed in the Tier One fishing and hunting options in Texas. For example, he championed topwater fishing for bass, and wading and plugging with light tackle for speckled trout and redfish. Not to mention South Texas quail, Gulf Coast waterfowl, and horn rattling for deer.

Stilwell's out-of-print book was on the dusty library shelf at Lamar High School in Houston in 1964, and once I got it in my hands I sort of forgot to return it. I still have that copy and hope the statute of limitations from the Houston Independent School District has expired on tardy library books.

A couple of years ago, I attempted to make amends by donating a copy of my book, Outdoor Chronicles, to the Lamar HS library but I'm not entirely certain the swap was equitable.

But most of the serious outdoor coverage was provided by the newspaper columnists in the big cities. In Houston, without question, the main man was Bob Brister, the outdoor editor at the Houston Chronicle for approximately 40 years. He had a huge following; one readership survey showed approximately 1/3 of the entire newspaper readership approved of his work.

Brister knew the outdoor pulse in Texas and, no small issue, he was a world-class talent in the field and on the water - as well as behind his Smith-Corona manual typewriter. He was larger-than-life and I grew up reading his columns.

When I was on active duty in the Navy, 1969 through 1971, stationed on an aircraft carrier in the Gulf of Tonkin off Vietnam, my mother faithfully sent Brister clippings.

A huge thrill at "mail call" was receiving an autographed copy of the Brister/Jack Cowan collaboration, The Golden Crescent. My parents went to a book signing at Meredith Long Gallery in Houston, and the magnificent leather-bound compilation of short stories and watercolors arrived on the ship a week or so before Christmas.

I never dreamed that several years later I would work side-by-side with Brister at the Chronicle until he retired in 1995.

Of course, being a professional changed my concepts of outdoor communicating. I suppose you could say I went from student to teacher.

My hope here is to show the influences of long ago, when I was "coming up" with rod and gun and a passion for the open spaces. All those guys, my heroes, are gone. Every one. But they left a huge legacy.

The same opportunities are available today; if anything, the options are overwhelming.

Print newspapers are shrinking but most of the dailies in major markets (at least in Texas) maintain full-time outdoor writers/photographers. And, of course, the dailies have websites. The catch-all format of the Big Three remains, and many regional and "vertical" (specialized ) outdoor magazines are available, filling virtually all niches from fly fishing to bow hunting to, well, "Texas saltwater fishing."

And books are published each year, to compete with the dozens of weekly fishing/hunting shows on cable television. Internet websites, alone, can boggle the beginner with information.

If a drawback exists, some of this stuff is poorly done. To repeat, 50 years ago, the market was limited and the established magazines and newspapers could "cherry pick" the top talent. Now, it seems, overnight experts abound.

But many fine talents are available. The task for the avid enthusiast is to find the ones that resonate. And, despite all the advances in lightning-fast, lickety-split, cyber-space communication, I remain convinced that well-written words are the best means by which to pass the great torch of being outdoors.