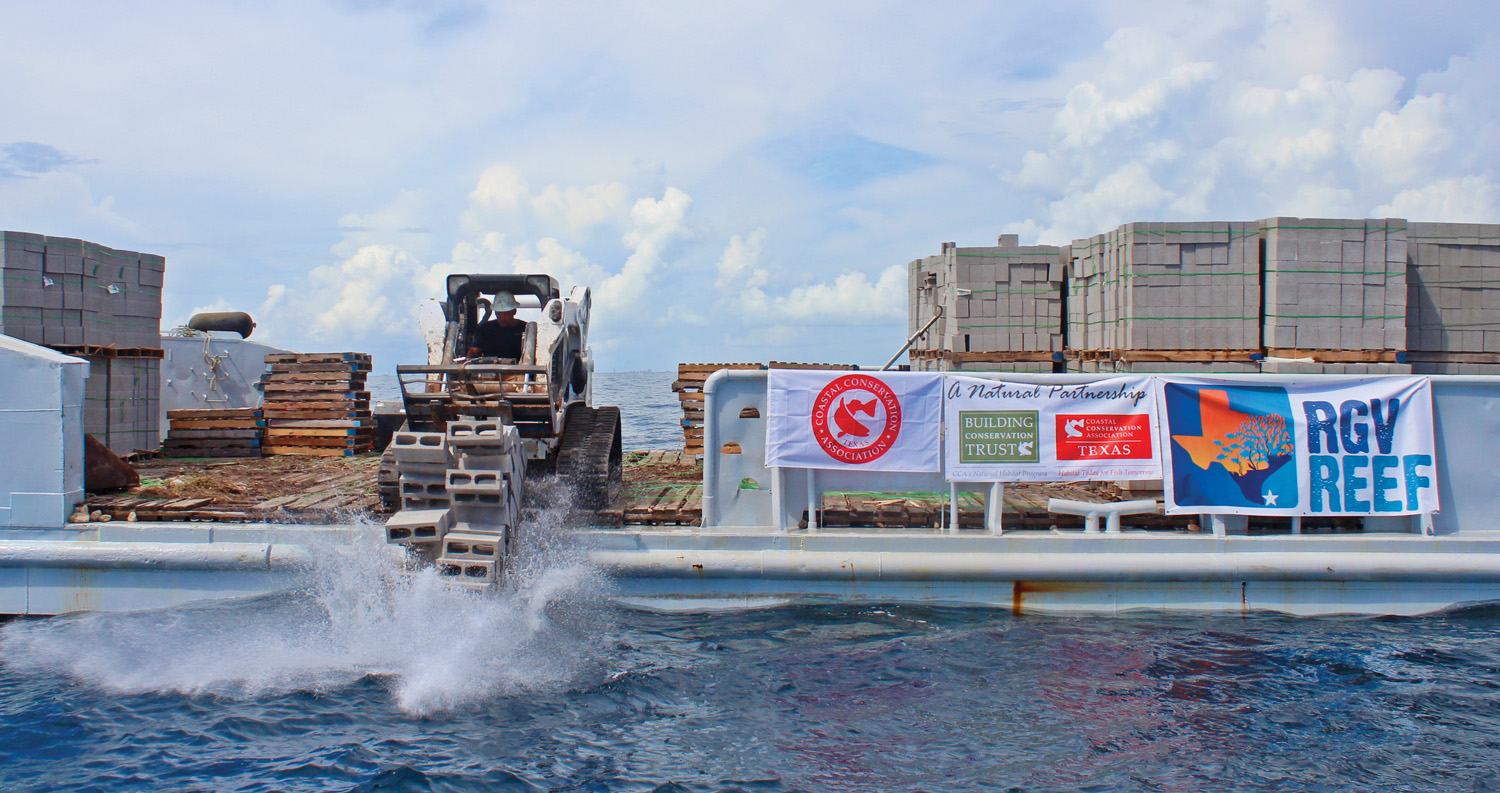 In 2014, brothers Bob and Gary Glick began talking about the fact that the Gulf of Mexico bottom, in particular the Lower Texas Coast, lacked habitat to support marine life for the entire life cycle. Growing up in the Rio Grande Valley and fishing the Gulf of Mexico out of Port Isabel, the Glicks had a vision that quickly became a movement and brought the community together to establish the largest permitted nearshore reef in Texas state waters. Collaborating with researchers Dr. Richard Kline and Dr. David Hicks at The University of Texas Rio Grande Valley; visiting with local recreational fishermen, Texas Parks and Wildlife Department (TPWD) Nearshore Reefing Program, and CCA Texas; the next step was developing a plan to establish a new nearshore reef off of South Padre Island. The plan was clear, the local community had to compile a proposal that TPWD would find difficult to ignore.

“My brother and I both felt there was a lack of suitable hard substrate in the Texas nearshore waters, and everything we wanted to do would land us in trouble.We reached out to Texas Parks and Wildlife Department’s Nearshore Reefing Program leader, Dale Shively, to find out what we needed to do in order to get a reefing permit,” commented Friends of RGV Reef President Gary Glick.Gary continued, “Dale told us to build a group of stakeholders, and we took Dale’s advice and we built a group of politicians, academicians, local fishermen, conservationists, fishing tournaments, and others to move the effort forward to get a new nearshore reefing area permitted off of South Padre Island.”

CCA Texas and the Rio Grande Valley group visited several times in 2014 about what they would like to accomplish. CCA Texas, local recreational fishermen, local academia and community leaders met with TPWD in early 2015 to pitch a new nearshore site for South Texas. Strong leadership and support from the local recreational fishing community, as well as a lot of data collection and planning, was very telling at this meeting. TPWD supported the idea, and they were impressed with the efforts of the local community and began the permitting process almost immediately.The long-term vision of this site was to have low-relief materials in the reef site for smaller marine life and fish, and higher relief materials such as pre-constructed pyramids for higher relief habitat and larger fish, thus creating a “life-cycle” reef.Long term visons also included sinking a large vessel for habitat and diving opportunities.

“Recreational fishermen in the valley are excited to have a new nearshore site with easy access for fishing and what we feel will offer excellent fishing opportunities for many species,” commented Friends of RGV Reef Treasurer Bob Glick.Glick added “The vision of the local active members of this effort is to create a nearshore site that isn’t just a one-time effort, but a continuous effort to reef the entire site and create a habitat within it that supports the entire life cycle of the Gulf fishery.”

With the support of the Rio Grande Valley and Lower Laguna Madre chapters, Habitat Today for Fish Tomorrow (HTFT) put together a funding proposal and submitted it to the CCA Texas Management Committee. HTFT and the Management committees met with local CCA Texas representatives from the Rio Grande Valley, and TPWD law enforcement to discuss the concerns of the Management Committee members.After answering their concerns, a $100,000 funding proposal was then submitted and approved by the CCA Texas Executive Board in August of 2015.HTFT also approved Building Conservation Trust (BCT), CCA National’s habitat program, for matching funds and BCT matched CCA Texas’s grant of $100,000, earmarking $200,000 for the Rio Grande Valley Reef. BCT contributed another $55,000 to the reef at its 2017 budget meeting in January 2017, giving CCA a total commitment of $255,000 to the reefing site to date.

The Rio Grande Valley grassroots group leading the effort quickly realized that in order to effectively raise funds and move forward, they must establish themselves as a non-profit organization. Friends of RGV Reef was established as a 501 (c) (3) organization and the local efforts continued. TPWD continued its efforts to secure a US Army Corp of Engineers (USACE) permit and a Texas General Land Office Surface lease for the new site. The permit and lease were secured in mid-2016. The normal size for TPWD Nearshore Reefing reefing sites is 160 acres. With the plan presented by the Friends of RGV Reef, this new site was permitted for 1,650 acres, making it the largest permitted reefing site along the Texas coast.

It was time to begin gathering materials for deployment into the site. Friends of RGV Reef was able to secure a storage site on the Brownsville Port Authority’s property and began collecting hard substrate materials such as concrete rubble and culverts. They were also able to secure two vessels, an old tug and an old shrimp boat. CCA Texas funds were going to be used for purchasing over 67,000 cinder blocks for low relief habitat, and for deployment costs of the cinder blocks and other materials. TPWD was able to secure a Coastal Management Program grant of $400,000 and will match another $400,000 for pyramids to be deployed within the site. Researchers from Texas A&M and The University of Texas Rio Grande Valley secured research funds that would deploy 50 pyramids into the site in configured patterns for their research, that would help establish best practices in future reefing projects.

Reefing became reality in November of 2016.The “TIFT Tug” and “Max’s Wreck” were both sunk within the reefing site and marine life was immediately drawn to the boats. In late June 2017, the 50 pyramids that are part of some of the nation’s finest academics research, were deployed by Lil Mo Marine Services and Atlantis Marine Habitats. On July 5, 2017, Lil Mo Marine Services began deploying the 67,000 cinder blocks and other concrete rubble that had been collected. In the near future TPWD’s Nearshore Reefing Program will deploy several hundred pyramids into the site as part of their CMP grant secured in 2016.

The “Life Cycle” reefing concept has become reality. Habitat is now in the water for the early life stage fish, the young fish, and the mature and larger older fish. Friends of RGV Reef, CCA Texas , and BCT have plans for more materials to be placed into this site, and will continue to work together toward that goal. This critically important habitat will grow the bio-mass of species such as red snapper by the hundreds of thousands annually. This project not only provides services to the fishery, but it provides an easily accessible opportunity for recreational anglers to fish in the nearshore waters of Texas.

CCA Texas and Building Conservation Trust are committed to creating and restoring habitat along the entire Texas coast. The Texas Reefing Initiative of BCT will continue to raise funds for nearshore reefing opportunities as they arise. CCA Texas and BCT are working hand and hand with TPWD, and local community groups to give Texas’s recreational fishing community fishing opportunities that will last for generations. Please be sure to visit www.ccatexas.org and www.buildingconservation.org to see the habitat work of CCA.For more information about Friends of RGV Reef, visit www.rgvreef.com.