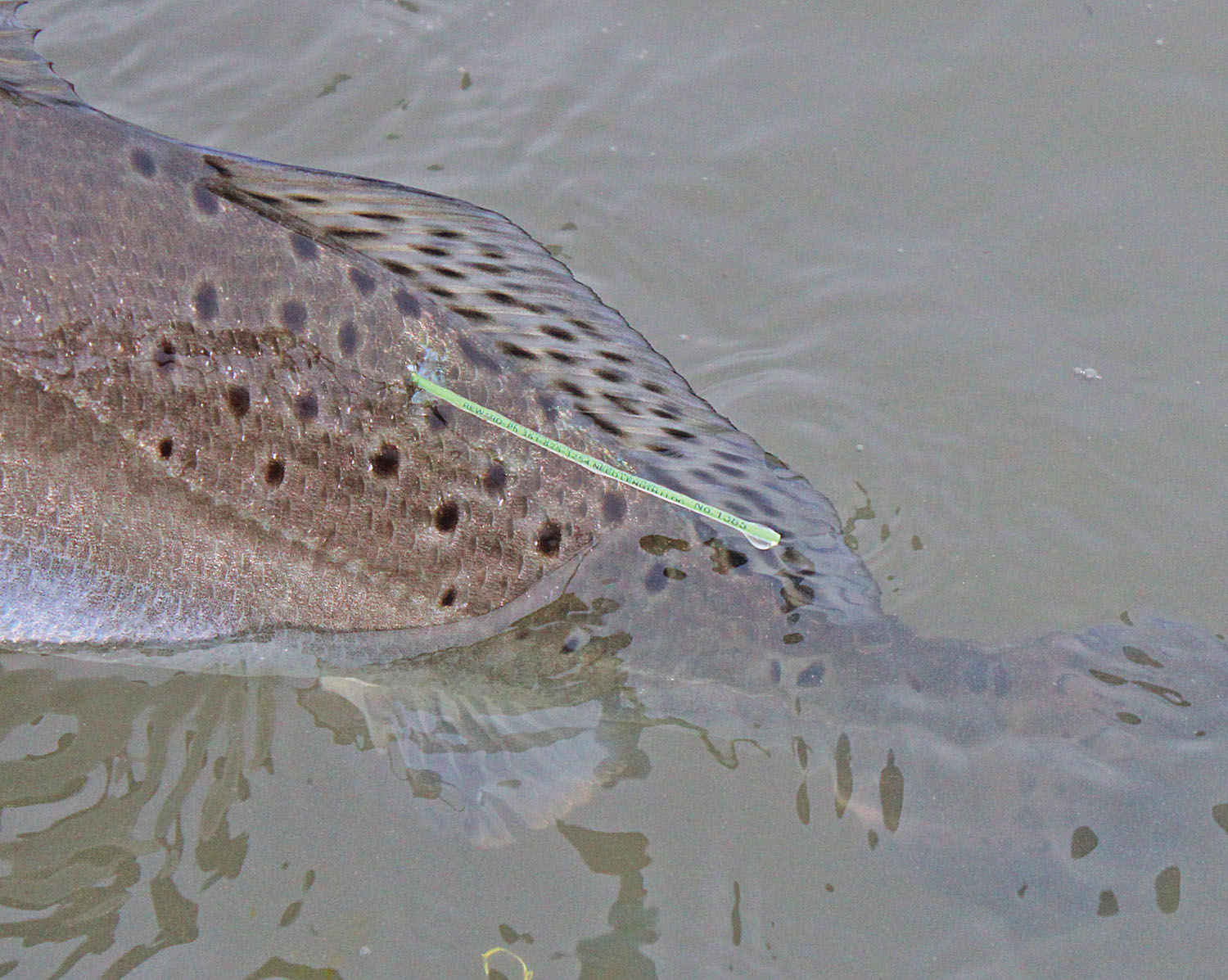 Dart tags are inserted near dorsal fin to identify study specimens prior to release. Anglers catching these fish are asked to release them and notify HRI of the capture and release. Photo by Lisa Laskowski.

"Project monitoring and follow-up is key to fully assessing the impact of habitat restoration projects,"
commented Dr. Greg Stunz from HRI. Stunz continued, "In the Cedar Bayou restoration project for instance, while very positive and immediate impacts were seen, it is important to document the trends long-term to see if the opening has lasting impact. We are confident it will, but we want to put the science to it."

As Dr. Stunz noted, immediate impacts are often seen, but the long-term monitoring will show the significance of the effort in the end. Habitat restoration and creation is expensive. Funds that are secured to execute these projects often have post-completion monitoring components attached to them to ensure the projects are fully executed as planned. The data gathered to satisfy this requirement is then also available during the design and implementation of similar projects in the future. Some projects require pre- and post-construction data collection and this scenario provides the most conclusive baseline comparison studies.

Cedar Bayou and Vinson Slough Restoration is a project that had a significant amount of pre-construction monitoring and continues to undergo post-construction monitoring. HRI has provided this monitoring and it includes master's program student Quentin Hall's studies that focused on the intensity and immediacy of estuarine-dependent species response to the reopening. Quentin's studies included intense survey efforts both prior to and after the project. This pre/post monitoring showed measurable increases of numerous species within days of the reopening. In addition, a component of his research also included tagging eleven redfish and tracking their movements through an acoustic array within Mesquite Bay and Cedar Bayou to the Gulf of Mexico.

Judd Curtis, PhD from HRI, recently began a study to examine spotted seatrout movement patterns and habitat use through the newly restored and re-opened Cedar Bayou tidal inlet. This project will use acoustic tracking techniques. HRI graciously donated a trip to the CCA Texas Aransas Bay Chapter banquet live auction for two individuals to accompany the HRI team in the efforts to catch, implant transmitters and tag 24 spotted seatrout for this effort. Linda and Alton Voigt, owners of Rockport Tackle Town, purchased the trip and fished along with CCA Hill Country Chapter volunteer Lisa Laskowski, CCA Texas staff member John Blaha, Capt. Jay Watkins and other HRI staff. The group collectively fished over a three day period in early December 2015 to catch, implant and tag the fish for the study. The size selected for study specimens was established at between 18- and 20" length and specific areas were chosen to fish within the Mesquite Bay-Cedar Bayou region. The process of securing and tagging the fish is a proven method used by HRI and other institutions, and has a very high rate of success in not only the survivability of the fish, but also in collecting valuable data.

After each individual fish is caught, it is carefully handled and placed into an oxygen-enriched live-well and the fish is monitored for a period of time. After specimen fish are deemed stable, a quick surgical procedure is performed to implant a sonar transmitter that emits a unique tone. When this has been accomplished the fish goes back into the live-well for monitoring prior to release. A green dart tag is placed in the back of the fish identifying it as a research specimen. This tag includes HRI contact information, and the public is encouraged to return the fish to the water if caught and to call HRI and report the capture and release.

Dr. Curtis' project will last for 426 days, which is the life of the transmitters. Data will be downloaded from the sonar receivers quarterly, beginning in spring 2016, to begin the process of deciphering the fish's movement through the array of acoustic receiving stations, types of habitat used, and also residency patterns. Seventeen receivers comprise the Mesquite Bay-Cedar Bayou array with the focus on the Cedar Bayou area, but there is coverage along the periphery of Mesquite Bay as well. In addition to tracking the movement of the fish, these transmitters will also be able to transmit temperature values which will allow the project to combine movement and climate data to look at responses to changes in water temperature that spotted seatrout may exhibit, and compare seasonal movement and habitat use patterns. This information will be invaluable in making informed management decisions for the conservation of this key recreational fishery.

Habitat creation and restoration is important in the effort to ensure healthy coastal resources for the future. Equally important to these efforts is the research and science prior to the execution of the projects and after they are completed. CCA Texas is committed to being a part of all of these efforts and will continue to work to ensure future generations have access to healthy coastal resources.